Expand your collection of cast iron kitchenware with these sturdy, long-lasting cooking essentials. 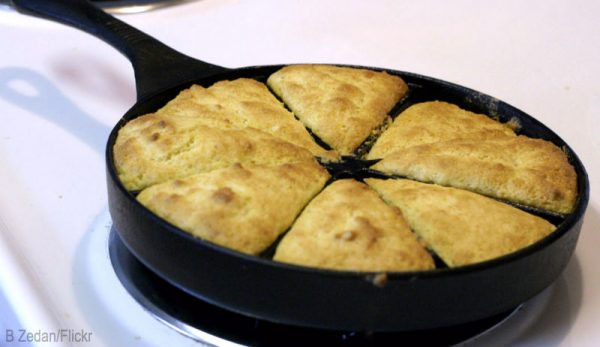 by Samantha JohnsonNovember 4, 2014
PHOTO: B Zedan/Flickr

With so many items constructed from plastic and other inexpensive materials these days, itâ€™s comforting to know that cast iron still holds a revered place in our kitchens. But while cast iron skillets and Dutch ovens continue to provide us with tasty meals and foster our pioneering spirit, there are other cast iron items that can make great additions to your kitchen, as well. If you are interested in expanding your cast iron collection, here are four items to consider.

Griddles have long been used for making delicious homemade pancakes and fritters, and if the thought of enjoying these scrumptious treats for breakfast sounds appealing, a cast iron version will make a terrific heavy-duty addition to your kitchen.

Brand-new griddles can be purchased from a variety of sources, including direct from Lodge, a U.S.-based cast iron manufacturer. Antique cast iron griddles are harder to find, as collectors quickly snap up vintage cast iron. When shopping for a griddle, keep in mind that different models may feature different cooking surfaces: some are flat while others are ribbed like a grill. Some double-sided models include both surfaces if you like diversity in your cooking.

While not the first cast iron kitchen items that come to mind, cast iron teapots are perfectly suited for your farmhouse kitchen. These quaint kettles originated centuries ago in Japan, where they are referred to as tetsubin, and remain in use today thanks to their excellence in distributing and retaining heat.

These often-ornate teapots are available from many suppliers, with Overstock.com offering a wide selection of options. One thing to consider when purchasing a cast iron teapot is its capacity. The size of your teapot will obviously have an impact on how much tea you can produce, so if you plan on making enough to host a party, a large teapot is a must. However, keep in mind that cast iron is heavy, so the larger your teapot, the more cumbersome it will be to handle.

An Aebleskiver pan is a circular pan with a handle, similar to a skillet, with cup-like depressions for baking aebleskivers (classic Danish pancakes), hence its nickname: the “Danish Cake Pan.â€ť In addition to their traditional use, Aebleskiver pans are versatile and well-suited to baking other kinds of cakes, pancakes or pastries.

While not as common as many other cast iron items, Aebleskiver pans are produced in the U.S. and available from a variety of sellers. Because of their simplicity, there arenâ€™t many different features to consider when shopping for one, but finding one with an extra handhold on the front can make the pan easier to move and carry.

Thanks to the abundance of corn in North America, cornbread has been a very popular dish since pre-Colonial times. If baking home-cooked meals from a bygone era is something you find appealing, thereâ€™s nothing better than starting with a loaf of cornbreadâ€”unless, of course, itâ€™s baked in a cast iron cornbread pan.

Of all the cast iron items you might seek to purchase, cornbread pans will be among the easiest to find, as they are widely available from many suppliers. Although some cast iron items, such as skillets, donâ€™t offer much in the way of variety, cornbread pans come in a variety of shapes and styles. Choosing an ideal one is as much a matter of preference as anything else.

Whichever cast iron items you may choose to add to your kitchen arsenal, you can be certain that well-cared-for cast iron will last you a lifetime.