4 Common Caterpillars & What They Mean to Your Garden

Have you seen these worms wiggling around your crops? Find out whether these caterpillars are friends or foes. 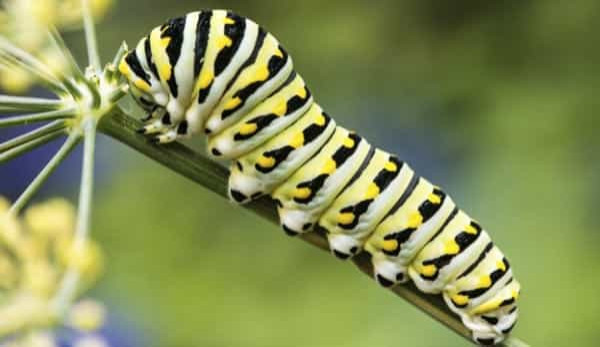 The main purpose in life for caterpillars is to eatâ€”and man, theyâ€™re good at it! Caterpillars are like teenagers of the gardenâ€”not only in appetite capacity, but also in that this stage of its lifecycle is temporary. Whether fuzzy, bumpy, spotted or striped, each one is a unique larval form of a moth or butterfly. You might be surprised at the adult it will become.

Identification is key in understanding whether a caterpillar is a friend or foe to your vegetable patch. Note that caterpillars have stinging hairs or other irritants, so itâ€™s a good idea to use gloves when handling ones that you don’t recognize.

Letâ€™s investigate four common caterpillars and what they mean to your garden. 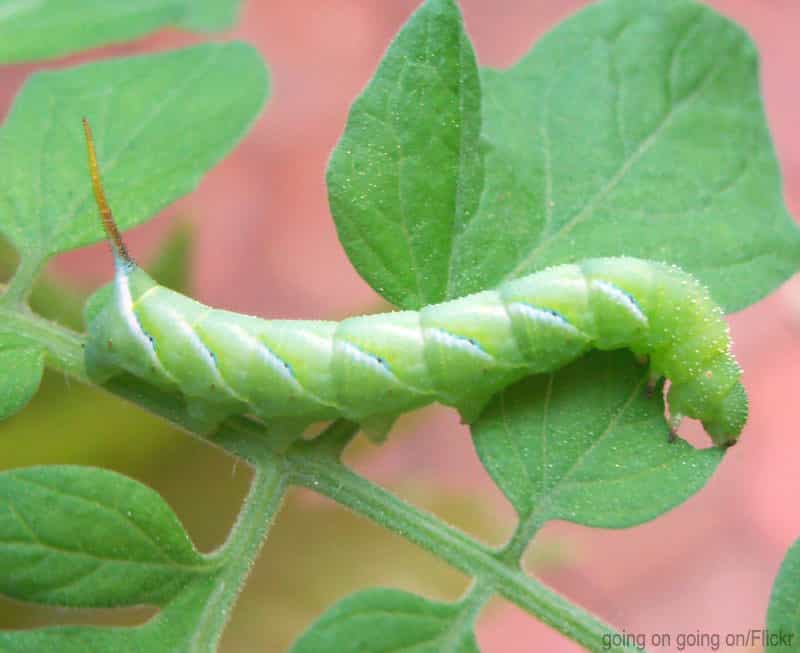 As expected from their names, these caterpillars devour leaves of tomatoes, potatoes, tobacco, peppers, eggplants and others in the Solanaceae (nightshade) family. However, the adult moths pollinate night-blooming flowers. The tobacco hornworm becomes the Carolina sphinx moth (Manduca sexta) and the tomato hornworm becomes the five-spotted hawk moth (Manduca quinquemaculata). Large, strong fliers, with a wingspan up to 5Â˝ inches, their scientific names give clues to how many pairs of yellow-orange spots decorate the body (six on the sphinx moth, five on the hawk moth).

The moths resemble hummingbirds. Each has a long proboscis perfectly suited for reaching inside tubular flowers, such as morning glories, sweet potatoes, moonflowers, petunias, Datura, and four-oâ€™-clocks. As they drink deeply of the flowerâ€™s nectar, the moths spread pollen and help these plants develop fruits. The moths themselves pose no risk to the nightshade family, other than laying their eggs on them for the larva to enjoy.

To limit their population in your garden, encourage parasitic braconid wasps. They have an insidious technique for destroying the caterpillars after theyâ€™ve used them up. The tiny, stingless wasp injects the caterpillar with its eggs and after hatching, the wasp larva chow down on the caterpillarâ€™s innards, avoiding major organs to prolong the slow death, until they work their way out to the surface. On the hornwormâ€™s skin, they spin tiny cocoons, pupate and emerge as adult wasps by the time the caterpillar dies. 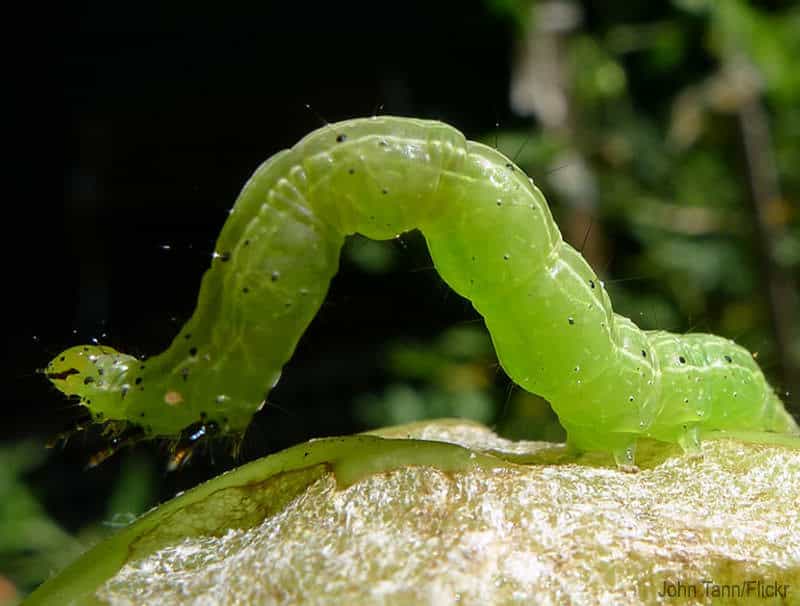 Turn over a cabbage or broccoli leaf in mid-summer, and youâ€™re likely to find a little worm, perfectly matched in color to the underside of the leaf. Upon closer inspection, a thin white line runs the length of each side. This tiny inchworm-like critter has prolegs and hindlegs and no legs in between, so it moves in a looping motion.

Commonly confused with other cabbage-eating caterpillars that metamorphose into white butterflies, the looper becomes the ni moth (Trichoplusia ni), also well-camouflaged. The mottled brown moth with about a 1-inch wingspan resembles a knobby dead leaf or tree bark. The ni moth belongs to Noctuidae, the largest moth family that includes other agricultural pests, cutworms and armyworms.

The looper eats most varieties ofÂ brassicas (aka cruciferous or cole crops), such as collards, kale, radish, turnip, broccoli and cauliflower. However, their taste isnâ€™t limited to the cabbage familyâ€”theyâ€™ll eat the leaves of nearly every vegetable available in your garden. In nature, specialists have less chance of survival; as generalists, loopers are annoyingly successful.

To protect your crops, you have to outsmart the looperâ€™s schedule. Row covers provide a physical barrier and extend the growing season by adding a layer of weather protection. Try planting early maturing varieties to beat the munching looperâ€™s lifecycle. Diversify your garden and experiment with multiple varieties of brassicas to see which are more looper-resistant. Understanding the soil ecology at the base of the host plants will also help control pests, as the pupae are formed in the soil and crawl up to the leaves.

As with the hornworm, you can let another insect do the dirty work of extermination. Create habitat for parasitic wasps and tachinids, flies that not only feed on cabbage loopers but also destroy stinkbugs, gypsy moth larvae and Japanese beetles. In short, plant more flowers to support beneficial insects. 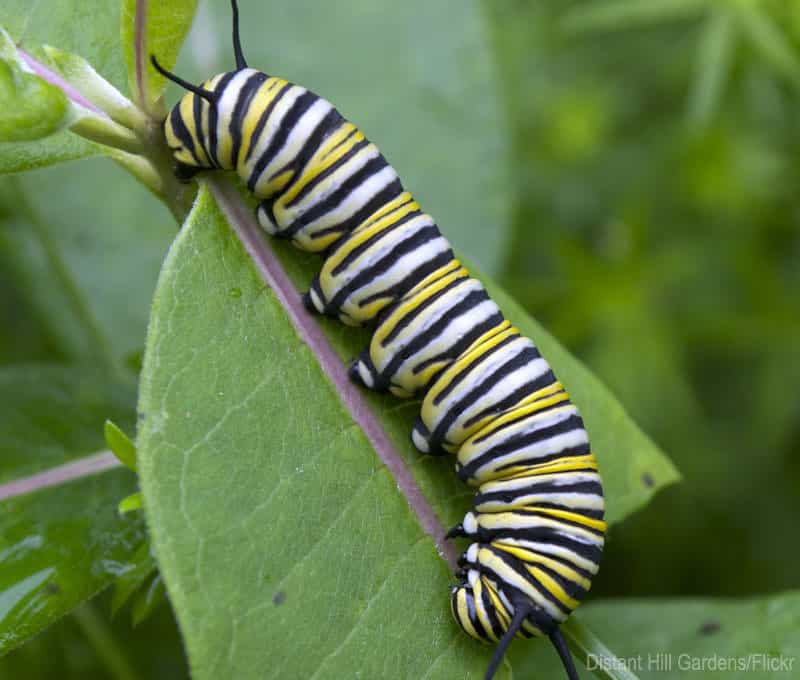 One of the most recognizable caterpillars is that of the Monarch: black-, yellow- and white-striped, with black antennae on the head and a body that stretches up to 2 inches long. Monarch caterpillars munch on milkweedâ€”and lots of it!â€”not only for food but also for future protection. The milky sap from the leaves stays in their system even after metamorphosis and makes the adult butterfly taste offensive to predators. Birds will actually avoid them once theyâ€™ve learned their lesson.

The adult monarch butterfly is one of the most recognizable butterflies, keeping the same color scheme as the larva, with a stained-glass appearance to its pumpkin-orange wings, black veins and margins adorned with white spots.

Monarchs are the only butterflies that truly migrate, moving thousands of miles north to feed, depositing eggs along the way. In some cases, their offspring complete the journey for them. Returning south across the span of the United States, millions of monarchs head to Mexico to spend the winter huddled on massive pines and eucalyptus trees.

In recent years, a dramatic decrease in monarch populations has caused concerned groups to rally for their rescue. In addition to deep cultural ties to the Dia de Muertos traditions in Mexico, the monarch has recently become a symbol of pollinator conservation and appreciation for migration.

Because Monarch caterpillars only eat milkweed, they pose no threat to your garden. In fact, gardeners across the country go to great lengths to attract them. Historically, farms that let milkweed grow up along fences or between rows were a reliable nursery for caterpillars. The practices of using pesticides and fence-to-fence planting of monocrops are among the top reasons for the monarchâ€™s decline.

Attractive flowers of blooming milkweed provide much-needed nectar for the migrating butterflies. Several varieties are available, producing colorful bouquets of rosy pink, lavender and orange. Other edible and medicinal herbs that attract butterflies include bee balm, catmint, Echinacea, comfrey and dandelion. In exchange for the sweetness, the butterflies provide pollination services for the plants.

A great list of butterfly host plants can be found on Monarch Watch, a source of information and supplies for all things monarch. Create a Monarch Waystation by planting the right amount and variety of host plants, which will attract other great pollinators and predatory insects. You can register your waystation and be included in a growing database of butterfly bed-and-breakfasts. 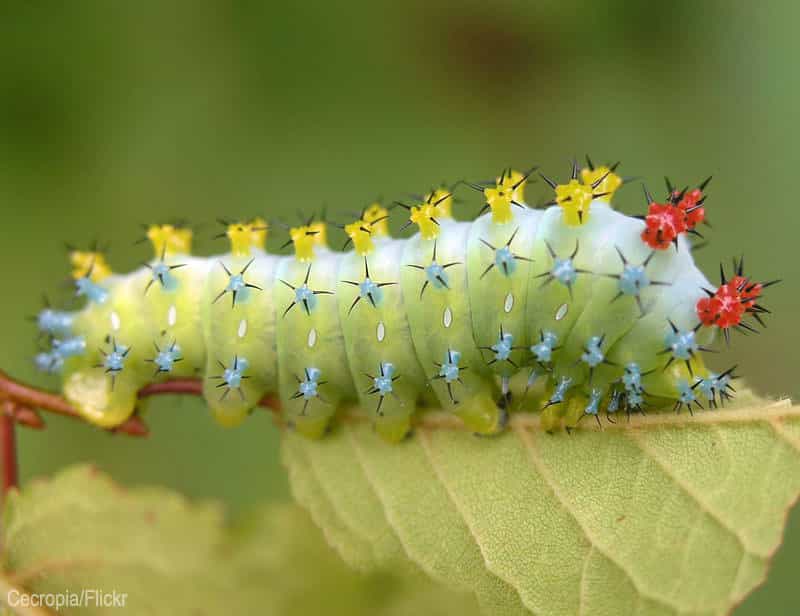 A punked-out circus clown is the first thing that comes to mind when you see this caterpillar. Itâ€™s about as long and thick as your finger, neon green with multi-colored spiked knobs. Surprisingly, the spikes arenâ€™t harmful to the touch. Many go through different stages, known as instars, so you may see the same caterpillar at a wide range of lengths as they molt and leave behind their old skin.

You might also be surprised to know that this hearty caterpillar poses no threat to your vegetables. If you have fruit trees, watch for them on apple and cherry leaves. They also go for maple and birch leaves. Despite their tough appearance, they have enough predators that they donâ€™t normally become a pest.

If you find them and want to help them out, you can protect them as they spin their cocoon of leaves and provide a safe place to spend the winter, metamorphosing into an impressively huge moth. The cecropia is North Americaâ€™s largest moth, with a wingspan up to 6 inches. These moths sport furry, russet bodies and wings that fool predators with four white crescent shapes that resemble eyespots. The adult has no working mouth parts, so its only mission is to mate. Eat, have sex, and dieâ€”thatâ€™s the life!

All gardens need animals. Besides bringing interest and fun, they create fertilizer, aerate soil, disperse seeds, regulate growth, decompose waste and pollinate flowers. Keep in mind that caterpillars are animals, too, and they do their part, as immature life forms and as adults, to maintain balance in the predator-prey dance that happens while we think weâ€™re the ones gardening.