4 Egg Experiments (Or Egg-Speriments) To Try At Home

Stuck at home with an abundance of eggs? Why not conduct these four egg experiments (egg-spiriments?) at the kitchen table? 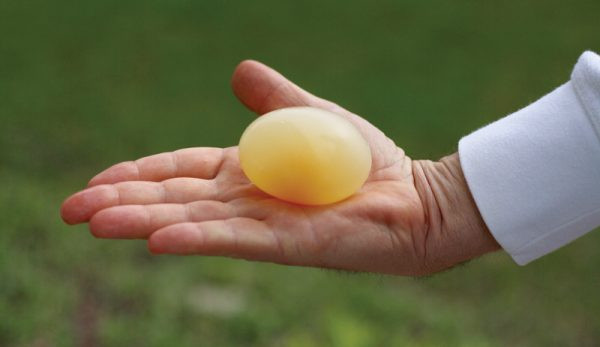 Egg experiments provide an egg-cellent opportunity to spark curiosity about the natural world in your children (and curious grownups) while also explaining some of the principles of physics and chemistry.

There are many different STEM (Science, Technology, Engineering and Math) projects that can be done using eggs. Here we present four of our favorites that use materials you likely already have around the house. So grab an egg carton or two, and letâ€™s see if these science experiments are all they’re cracked up to be!

Warning: While there are no specific diseases associated with heavy exposure to puns, this article on experiments contains high levels of egg and chicken puns. If you donâ€™t like puns (especially egg puns), this article may stress your hen-durance and make you a little cuckoo.

Note: Aside from a few household items, these egg experiments are easy, fun and safe. While there are no egg-splosions in the following egg-speriments, itâ€™s always better to have an adult do them with little ones.

This experiment provides a demonstration of density and its impact on buoyancy. Following the steps here, youâ€™ll find that adding salt increases the density of the water in the glass, until its density exceeds that of the egg, at which point the egg will begin to float.

Add 6 to 10 tablespoons of salt to one of the glasses of warm water, and stir until mixed thoroughly. Place an egg into each glass of water. If the egg in the saltwater sinks, remove it for a moment, and add more salt, stir, then try again!

Wash your hands and cups after handling raw eggs.

Buoyancy is a force acting upward that is responsible for keeping the egg, as well as boats, afloat. According to Archimedesâ€™ principle, the strength of the buoyancy is equal to the weight of the displaced fluid.

In this experiment, the salt-water is denser than pure water, which means the weight of the salt water that is displaced is greater than pure water, and its buoyant force is stronger. Because the salt water is denser than an egg, its buoyancy is actually strong enough to keep the egg floating, while the less-dense, salt-free water doesnâ€™t generate a buoyant force stronger than gravity on the egg, so it sinks.

If you want to do an more egg-sotic version of this experiment, go to the Dead Sea, a salt lake bordering Jordan to the east and Israel to the west. The human body can float in its salty water.

Next, try the Spinning Eggs experiment to learn about the physics of rotational motion. Through this experiment, you can demonstrate how an eggâ€™s center of gravity affects rotation, and a bit about Newtonâ€™s First Law of Motion.

Place the eggs on the table and spin them, observe the differences in speed.

Try stopping the eggs by gently placing one finger on the spinning eggs for a moment.

Wash your hands and surface after handling raw eggs.

The raw egg rotates slowly because its interior is a liquid, which moves inside the shell as the egg rotates, causing the center of gravity of the egg to shift, creating a wobble that slows down its spinning.

Conversely, the hard-boiled egg spins faster and more smoothly because the entire egg is solid. Its center of gravity is fixed, and the egg can rotate efficiently around that without a wobble.

Stopping the eggs is an opportunity to introduce Newtonâ€™s First Law of Motion, which states that an object in motion stays in motion until acted upon by an outside force. Though friction between the shell and table slows down the raw egg eventually, the momentum of the swirling interior of the egg tends to keep the egg in motion longer.

The reason is that the outside force (friction) acting on the eggshell is weaker on the liquid egg contents (because they can move within the shell) than on hard-boiled eggs where the entire egg is subjected to the force of friction.

Check out these 7 science facts about the egg-ceptional egg.

Finally, itâ€™s time to make some Bouncy Eggs! One of the most popular experiments with eggs takes only a little vinegar and a lot of patience to demonstrate a remarkable chemical reaction.

Wait two to three days, or until the entire shell has disappeared from each egg, then drain off the vinegar.

The eggshell should be gone; try lifting the egg up a few centimeters and letting it bounce.

Be aware: The egg is still raw so if it drops from too high, the membrane will break and spill the eggâ€™s contents

What youâ€™ll observe over the course of a few days is a reaction between acetic acid in the vinegar and calcium carbonate in the eggshell to produce calcium acetate (which dissolves away from the egg into the liquid), carbon dioxide (bubbles) and water.

After this chemical reaction is finished, the eggshell is dissolved, leaving a protein-based membrane behind, allowing the egg to bounce.

As an extension to the bouncy eggs experiment, you can also take your shell-less eggs and try this fun demonstration of osmosis.

Place bouncy eggs into two jars. Cover one completely with water and the other with corn syrup. Try adding a few drops of food coloring to each jar.

Wait one to two days, and then examine the eggs again. The egg in water should have grown substantially while the egg in corn syrup will shrivel up.

Through the process of osmosis, water is able to move across the semipermeable membrane surrounding the egg now that the shell has been removed. This membrane allows small particles like water to cross the barrier in either direction but wonâ€™t let larger molecules, such as the proteins in the egg or the sugars in corn syrup, to move through it.

Osmosis moves water from an area of higher concentration to an area of lower concentration, and eggs are about 90 percent water while corn syrup is about 25 percent water. As a result, water molecules move from the jar full of water into the egg in one jar, making the egg grow larger, while water moves out of the egg to the corn syrup in the other jar, causing the egg to shrink.

However, in both cases, individual water molecules move in both directions across the membrane, just more frequently from high water concentration to lower water concentration. This is why, if you used food coloring, the shriveled egg will also have changed colors, because water is moving freely across the eggâ€™s membrane, and overall more water leaves the egg than enters.

We hope the egg experiments were all they were cracked up to be. Please donâ€™t call fowl on any of our puns.

This article originally appeared in the May/June issue of Chickens magazine.