4-H Students Get ‘Wired for Wind’

As part of National 4-H Week and National Youth Science Day, students learn how wind technology can be implemented on the farm. 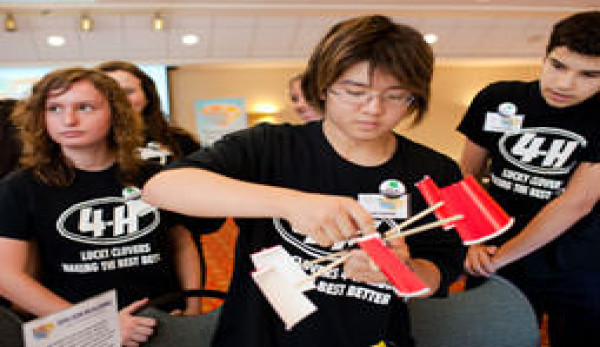 On Oct. 5, 2011, millions of youngsters from across the United States experienced the thrill of innovation and experimentation during the 2011 4-H National Youth Science Day. An annual event currently in its fourth year, NYSD seeks to spark an early youth interest in science and science careers. Each year, NYSD participants gather in their local communities to carry out 4-H’s National Science Experiment.

This year’s project, titled Wired for Wind, encouraged youngsters to consider wind as an alternative energy option. The experiment was developed by Nebraska 4-H and was the brainchild of University of Nebraska-Lincoln Extension educator John Hay. While Hay knew that a wind-energy project would meet NYSD criteria for an experiment that connects hands-on lessons in science, engineering and technology to civic engagement, he worried initially about the volume of materials windmill projects usually require. Through a partnership with KidWind, a private company specializing in educational wind-energy kits and curriculum design, Hay was able to overcome this obstacle. In addition to putting together a scaled-back, affordable turbine-building kit, KidWind pitched in on the NYSD curriculum, as well.

Participants used the kit to build horizontal- and vertical-axis wind turbines in order to determine the more efficient design. They also explored the effectiveness of various blade pitches and used wind-speed and population maps to determine how and where a wind farm could be implemented in their individual states.

Wired for Wind carried on the NYSD tradition of encouraging innovation for the sake of bettering students’ communities and local ecosystems. Previous NYSD experiments have covered such topics as water quality, biofuels and hydrogels. NYSD is also a cornerstone of 4-H’s “One Million New Scientists, One Million New Ideas” campaign, an effort to engage 1 million new young people in science, engineering, technology and applied math programs by the year 2013.

“Our nation is falling behind other countries in the fields of science, technology, engineering and math,” says Donald T. Floyd, Jr., National 4-H Council president and CEO. “Participation in 4-H NYSD and other year-round 4-H science programming offers youth and adults the opportunity to engage in scientific exploration and work together to build the next generation of our nation’s scientists, engineers and mathematicians.”

Once again, this year’s 4-H NYSD events were scheduled to coincide with National 4-H Week (Oct. 2 to 8, 2011), a week devoted to community service and promoting 4-H’s misson of teaching youth leadership, citizenship and life skills. With 6 million members throughout the U.S., 4-H is the largest youth-development organization in the nation. It’s implemented at the local level by land-grant colleges and universities and the Cooperative Extension System.