Raising pigs is pretty simple—but these ingenious pig tricks make it even easier. 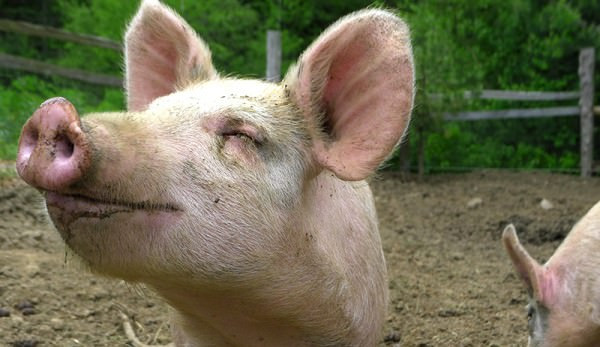 I never set out to be a pig farmer, but the day we closed the sale of our suburban house, my wife and I visited a farmer friend who implored us to take a few piglets to our new homestead. And so it was then that we found ourselves with two rowdy Berkshire gilts and absolutely no idea how to raise them.

Farming pigs is, it turns out, not that hard: You feed them and they grow into a marketable commodity. A new pig farmer will, however, be faced with a number of decisions during those six or so months of homing a porcine presence, some large and others small. I’ve found the small questions to be both frustrating for their sheer preponderance and the corner of farming where creativity is most welcome. In facing challenges, scratching my head and arriving at an ah-ha moment, I’ve felt connected to previous generations of hog farmers who also stared at at a herd of porkers and mumbled, “Well, now what?”

One of the biggest challenges I’ve faced is feeding a herd of hungry hogs in an efficient manner. I’ve long understood the ideal solution to my problem was a large-scale hog feeder, the likes of which hold upwards of a ton of food and boast chutes for 12-plus mouths—and I also knew that with a few litters a year, I’d never recoup the cost. Over the years, I’ve purchased my fair share of farm-store pig feeders (all destroyed by curious snouts), cut apart scores of food barrels for makeshift feeders (quickly turned into unusable pig toys), and once even built a beautiful, 12-foot wooden trough, bolted in every conceivable area for maximum reinforcement (turned to splinters within the first month of use). Pigs are generally destructive, and that’s never more true than when food is involved.

One day while watching my pigs, however, I realized something: When not wrecking my doomed feeders, the hogs spent most of their time with their faces buried in the soil, and that’s when it occurred to me: Why not just dump feed on the ground? Our twice-a-day feeding method and pasturing practice supported the notion, so, one fateful morning, I dumped a line of feed across the ground that allowed everyone a place at the table. And that’s what I’ve done ever since.

There are some challenges to this practice, like keeping an area of dry ground when it rains, as well as some surprising advantages. Where stationary feeders left the ground scarred from spilled feed, I can now move around the pasture at feeding time, distributing the nutrient load for a quicker recovery time.

I love pig huts, but I’ve never owned one (again, price point). Pigs need shelter from the sun and the elements, though, and that’s where cattle panels come in. Bent into an arc, anchored to a solid point and draped with a cheap tarp, cattle panels make the perfect solution for temporary hog housing. Recently, I overwintered nine pigs in a portable chicken coop with the door removed, but the bent cattle panels continues to be my favorite.

Bend two cattle panels, side by side, between six T-posts. Secure them with wire and cover the top with a dollar-store tarp. I orient the makeshift shelter to provide shade from southern sun and a windbreak from cold, northern winds. Then I toss in some straw for bedding and watch my pigs get cozy in their new home. When it’s time to move pastures, teardown and setup is only a half-hour project.

3. Gardening: Let Pigs Do The Cleanup

The end of garden season presents a budget buffet for growing pigs, but getting garden waste from plot to pigs requires both effort and the removal of nutrients provided by decaying plant matter. Easy solution? Put pigs in the garden.

Requiring little more than a makeshift shelter and a few lines of electric fencing, putting pigs in the garden clears garden waste, plows tired soil and efficiently breaks down plant matter into nitrogen-rich fertilizer. Just move the pigs out when they’ve cleared the area, and then till/harrow to distribute the manure.

Note: For market gardens, check with state laws regarding the application of fresh manure for commercial products before letting pigs loose in the area.

I’ve never tried this pig hack, so it comes without my explicit recommendation, but an elder farmer shared it with me once as an “old way.” I’ve never suffered the treacherous effects of lice in any of my pig herds—they muddy themselves up to control that—but if body parasites become a problem, farmers of old had an ingenious solution: Soak a piece of carpet in used motor oil and tie it around a tree. The itchy pigs will rub themselves against it, oiling up their skin and killing the lice. My wife commented that we might opt for canola oil instead of an automobile mix, but we keep the carpet trick in mind should we ever need it.