4 Reasons Black Vultures Are On the Rise

Black vulture populations are increasing in the U.S. What does this mean for livestock and wildlife? 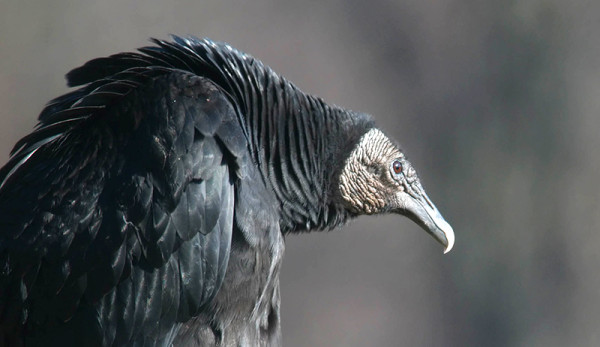 My first up-close and personal vulture experience was with Sol. â€śHere, Solly bird, Solly Sol,â€ť sang aÂ volunteer at a wildlife rehabilitation center, sweetly chatting with the bald-headed scavenger that boastedÂ a 6-foot wingspan. Sol was an ambassador whose job it was to help volunteers educate people about her own species’ survival and relationship to humans. The name Sol stood for “short on looks,” thoughÂ I preferred to see the beauty in Sol. That name also referred to the sunbathing pose she would strike in the New Mexico high desert, basking in the morning sun.

Solâ€™s captive life began when she and her sibling were just hatchlings, and some boys bird-knapped them from their cave nest. Wildlife rehabbers tried to trainÂ them to imprint on another turkey vulture, with the goal of releasing them back to the wild. This didnâ€™t work for Sol, and she got too accustomed to humans to be released. She would be in danger of approaching the wrong human for a handout, only to be shot.

I wondered if Sol missed riding the thermals and flocking with her family at night. Vultures are excellent soarers, though they are bit heavy and awkward on the ground. They make up for it in their grace and ease once they get up in the air. Turkey vulturesÂ forage on carrion independently throughout the day, and then gather with large groups of fellow vultures at night.

I met Sol more than 10 years ago, and I think of her outstretched wings soaking up the sun whenever I watch the V-shaped floating silhouettes that circle the sky. Iâ€™ve been noticing similar shapes in the sky in a big way lately, as I drive down the Kentucky River valley in the early morning and late evening. I can expect to see at least 100 huddled in the treetops in their communal roost, overlooking the river along a narrow, winding road. Oddly, I donâ€™t see the signature red heads on these vultures. Many, perhaps all, are black vultures.

Thereâ€™s some concern about the trend of black vultures moving northward. Some say they are more aggressive, possibly taking animals before they have died. Local farmersâ€™ anecdotes recount black vultures pecking at the eyes of newborn cattle or lambs or elderly livestock that are not quite gone from this world. As horrible as that sounds, the presenceÂ of any type of vulture could also be a clue for the perceptive farmer. Check your fields for newborns, or worse, a miscarriage that could go unknown without a scavenger tipping you off. Vultures are attracted to birthing sites for the afterbirth, so they arenâ€™t necessarily a cause for concern. However, if you want to scare them off, use a loud noise to disperse them.

Black vultures have been joining the turkey vultures farther north, a steady creeping that could be due to a variety of factors.

Toxicity in the natural food web has changed over the past few decades. Following a major decline in scavenger populations across North America due to DDT and lead poisoning (from hunters leaving carcasses), the numbers of both turkey and black vultures are back to a stable and healthy number. This is thanks to less harmful pesticides in the food web and federal and state regulations requiring the use of lead-free ammunition.Â In addition, the changing landscape of agriculture could have decreased the black vultureâ€™s choices in southern states, forcing them to move northward to find food. Small family farms with free-ranging animals have been replaced with large spans of monocrops; confined animal operations with industrial disposal techniques could put a vulture out of a job.

AccessibleÂ Food On The Road

As goes the highway, so goes the vulture. Scavengers eat what is available, and road kill is very available. Over the past 50 years, the highway systems have changed the face of our landscape in variousÂ ways, disturbing natural wildlife corridors while opening up a roadkill buffet for scavengers. Overpopulation of deer in many areas is a logical connection to an increase in black vultures, thoughÂ deer make up only a small percentage of what vultures are eating. The majority of their food is smaller wild animals, such as opossums, skunks and woodchucks, along with farm animals, such as pigs, sheep and chickens. Even insects like mayflies and beetles, along with cow manure and rotten pumpkins have been identified in vulture pellets.

Black vultures historically have lived where they can find food year-round without having to migrate very far, mainly South America and Mexico. With warmer winters, vultures are just one of many wild animals that are finding they can expand their range as the climate changes. Black vultures are now spotted as far north as New England.

Black vultures donâ€™t have quite theÂ keen sense of smell thatÂ turkey vultures do. That sniffer helps them locate the day-old deceased, which they prefer to rotting, stinking flesh. Black vultures follow turkey vultures to a food source and then bully their way into the feast. They will communicate to their own family members where to find the food if some werenâ€™t successful with their ownÂ foraging. If youâ€™ve got to be a scavenger, you might as well be an expert opportunist too.

Sol taught me that humansâ€™ relationship with vultures is full of misunderstandings. They are not dirty animals at all. In fact, they are equipped with digestive enzymes that can nullify any worry of spreading disease. Thereâ€™s no need to kill a vulture to protect livestock. In fact, itâ€™s illegal without a federal permit. If we can understand that these animals are serving a great purpose in the ecosystem, cleaning up the remains that weâ€™d rather not deal with, and then watch them gracefully glide, we may then realize that they have a complex life of their own to contend with.