Chicks and ducklings are adorable together, but they pose dangers to one another until they're older. See why it's best to raise them separately. 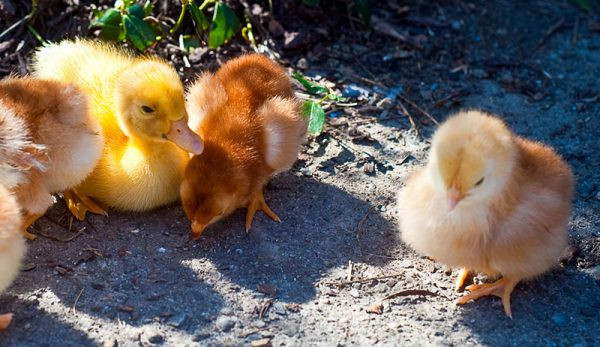 Thereâ€™s no denying that baby chicks are adorable, all fluffy and lovable. Many flock owners also know that baby ducklings are just as cute and endearing. Chickens have often been considered the â€śgatewayâ€ť farm animal: the one that leads to the rearing of other livestock, with ducks being an extremely popular second choice. A drive through the countryside almost always results in the sighting of at least one farm with ducks and chickens roaming in a run or near a barn.

Despite this appearance of idyllic farmyard togetherness, chicks and ducklings do not make the best brooder companions. It might be tempting to house the two types of babies together, for the sake of either cuteness or convenience. Yet multiple reasons exist why this pastoral pairing should be avoided, at least until the birds are fully feathered juveniles or adults. Read on for four of them.

Even when they’re just a day old, ducklings are drawn to water. They might not swim yet, but they can definitely splash. Not only can they thoroughly soak the shavings, they might also douse any chicks wandering by the waterer. Getting drenched or nestling down on wet bedding can chill a baby chick and lead to hypothermia, as the bird is too young to regulate its body temperature.

During their first week of life outside the shell, baby chicks require a constant brooder temperature of 95 degrees. This temperature should be dropped by five degrees each week until room temperature (approximately 70 degrees) has been reached. Ducklings, however, require less heat; their brooder temperature starts at 90 degrees, then reduces by 10 degrees each week until 70 degrees is reached. Housing both types of infant poultry together would mean that either the ducklings would overheat or the chicks would become chilled. Fluctuating temperatures during this crucial stage of life can result in poor growth, respiratory issues and increased susceptibility to disease.

While baby chicks do seem to grow up right before our eyes, a ducklingâ€™s rate of growth exceeds that of a chickâ€™s. Ducklings at three weeks of age dwarf standard-size chicks, with ducklings from meat breeds such as PekĂ­n and Rouen easily three times the size of a chick. Because of the size difference, ducklings can accidentally step or sit on their smaller brooder mates, causing them injury. Ducklingsâ€™ quick growth rate also means that a brooder can change from spacious to overcrowded within a week.

Ducks have few natural defenses; their main way of escaping predators is to swim out into bodies of water where land-based carnivores canâ€™t reach them. While baby ducks can nuzzle and nip with their rounded bills, thatâ€™s about the extent of the damage they can do. Chicks, however, have sharp beaks that, during the first few days of life, feature the hornlike egg tooth used to break out of the shell. Armed with these pointy natural weapons, chicks can peck eyes, puncture webbed feet and cause other unintentional injury to defenseless ducklings.