Cast iron is great when it comes to longevity, so needing to replace a pan is rare, but here are situations where you might want to consider it. 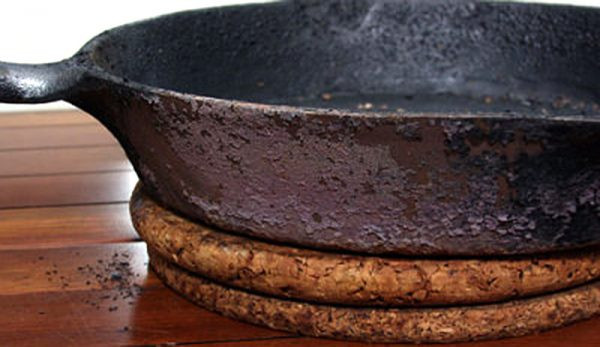 The enduring cast iron skillet completes every homesteaderâ€™s kitchen collection. Sturdy, resilient and iconic, these cooking vessels are hardy enough to withstand the tests of time, tarnish and high temperatures. When maintained properly, cast iron pans can be passed down through many generations of cooks and serve a multitude of cooking purposes, from searing steaks and braising greens to baking cakes and simmering gravy.

American cowboys of the Pony Express carried cast iron pans in their saddlebags for campfire cooking. Cast iron cookware is displayed in historic homes like Thomas Jeffersonâ€™s Monticello estate. While cast iron pans are traditionally associated with Colonial America, versions of cast iron were also used for wok cooking in China as early as the 16th century. Even with many modern types of cookware on the market today, old-fashioned cast iron remains unrivaled in its cooking versatility and conductivity.

According to Mark Kelly, marketing director at Lodge, a longtime leader in cast iron crafting, the more a cast iron piece is used, the better it gets. Oils cooked in the pan become carbon particles, which add to the panâ€™s gradually developed seasoning. There are very few cases when a cast iron pan canâ€™t be revitalized or repairedâ€”even a rusted or molded pan can be refurbished and re-seasoned back to working order.

Still, there are a few cases to consider retiring Grandmaâ€™s old cast iron pan for a newer version. Here are four:

A sudden drastic temperature change is the Achillesâ€™ heal of cast iron, Kelly says. Shocking a scalding hot pan in cold water can compromise the panâ€™s ability to conduct heat and causes the molecules to constrict quickly, resulting in warping. The disfigured pan becomes impractical to use; if yours wobbles or tilts on a flat countertop, consider purchasing a new one.

Itâ€™s easy to avoid thermal shock of your cast iron. If you choose to clean your pan with water, use warm water after the pan has cooled down. When deglazing a pan with a wine, make sure the wine is room temperature.

If you inherited an old pan with unknown origins, it might be worth considering an upgrade to a newer version. Older cast iron pans could be constructed from a combination of miscellaneous metals, including recycled steel and pig iron, Kelly says. Manufacturers of newer cast iron pieces, such as the campfire stoves, Dutch ovens and skillets, guarantee the source of their metals, so cooks can rely on optimal heat conductivity. As an added bonus, todayâ€™s cast iron makers pre-season their products, so theyâ€™re ready to use upon arrival.

If youâ€™re not interested in scrubbing your pan every time you spot rust, consider purchasing a skillet with heat-enhanced iron. An extra heat treatment discourages rust so the iron endures through uses.

Perhaps thereâ€™s a budding young cook in your life who would like an heirloom gift during the holiday season. Your handed-down skillet can serve as a memorable and meaningful gift to someone who appreciates the tradition of cast iron cookingâ€”just make sure you replace it so you can continue cooking, as well.

Elizabeth Troutman Adams is a public-relations specialist and freelance writer based in the Bluegrass region of Kentucky. In addition to gardening, cooking and homesteading, she loves riding horses, practicing yoga, and spending time with her French Bulldog, Linus, and husband, Shawn.