Here are facts about what causes the rash in poison ivy, how to rid yourself of the reaction and how to eradicate the plants without using harsh chemicals. 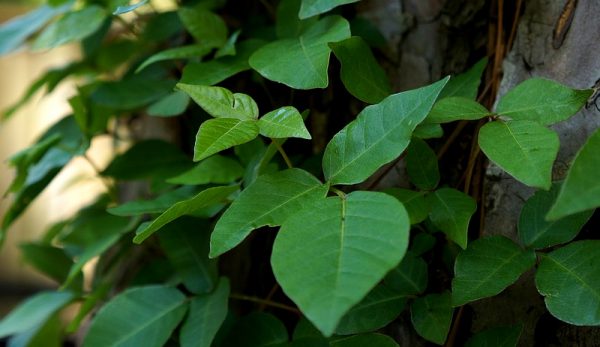 This is the time of year that during hikes in the woods or walks on the farm you’ll notice lots of poison ivy leafing out. If your farm hosts poison ivy of its own, and you wonder how best to eradicate the plants without resorting to nasty chemicals, you might find the following information useful.

1. The Rash Is Caused by Urushiol Oil

About 80 percent of the population is susceptible to the urushiol oil contained in poison ivy plants. Contact with this oil causes skin to break out in a red, bumpy, itchy rash. Even if you haven’t developed a rash in the past, new exposures can always bring about an allergic reaction. In fact, repeated exposures increase the odds of susceptibility.

That’s why it’s crucial to wash up with a poison-ivy soap (such as Tecnu or Ivy Off) immediately after possible exposure to the plant. This goes for spring and summer as well as fall and winter. These products break up the urushiol so you can readily wash it off your skin. Urushiol residue remains potent on exposed clothing, tools, shoes and pets for several years, so carefully washing all these items is a must, as well.

2. Your Rash Can Spread—But It’s Not Contagious

A rash from poison-ivy exposure initially develops right where the urushiol contacted the skin; this can happen in a few hours or as long as a few days after contact. The really bad news is that the poison ivy allergen can then be carried systemically within your body, causing rashes to “pop up” on other parts of your body. It’s not, however, contagious to other people who contact the rash on your skin, even if the rash is oozing. The initial exposure must come from direct contact with the urushiol itself.

3. Poison Ivy Is a Year-Round Problem

Unfortunately, it’s possible to contract poison ivy year-round. You can contract it from exposure to the leaves for sure, but you can also get it from touching the dormant stems and even the root system. Because of this, be careful when handling firewood from trees that might have had poison ivy vines growing up them. The vines and exposed wood remain poisonous for as long as five years after being cut down. Plus, the smoke produced from burning poison ivy is also dangerous; you can end up developing the rash all over your body and even in your lungs.

4. Protect Yourself by Going to the “Root” of the Problem

To successfully get rid of small to medium-size poison ivy plants, dig them out. As I am highly allergic myself, I have a dedicated “poison ivy shovel” in my shed that I use only to dig out poison ivy plants. I wear an old raincoat and chemical-resistant gloves for the task (these items are also dedicated as “poison ivy gear”). Once the plant is dug out, I put a large plastic trash bag over my arm and then pick up the plant and flip the bag down over it so it’s encased (kind of like picking up after a dog). I then tie the bag closed and throw it in the garbage.

Larger vines are a tougher issue. I’ve hired a landscaper to remove them in the past and would probably do the same again if the need arose. You can also saw off the “trunk” of the ivy and allow the top portion to die off on its own (but remember, the urushiol can remain potent for as long as five years). You can dig out the root or continue to regularly remove any new growth as soon as it sprouts. This will eventually serve to starve the roots of carbohydrates and kill the plant.