4 Things You Didn’t Know About The Blue Ash

As many ash trees become victims of the emerald ash borer, this particular species may have a better chance of survival. 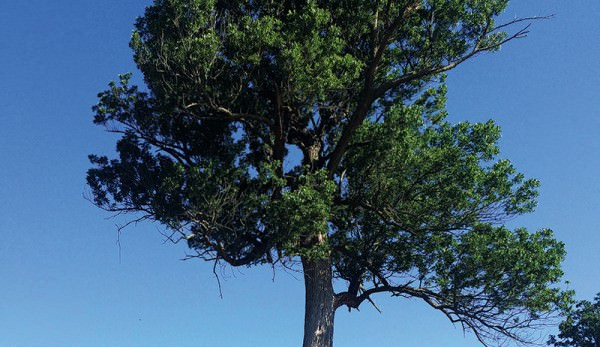 Rising high above a grazing pasture of Elmwood Stock Farm, an organic farm in Kentucky, stands a majestic blue ash. Its trunk and limbs are prominent against the open landscape, conjuring up images of the African savanna, and according to Rob Paratley, curator of the University of Kentucky Herbarium, its story might not be all that different from those distant trees. Although experts debate what the farm’s landscape might have been like prior to its settlement in the 1800s, some guess that this particular tree may have seen more roaming buffalo than human activity in the early years of its development, perhaps contributing to its grandiose stature.

The blue ash (Fraxinus quadrangulata) is an iconic tree of the region, preferring the alkaline soil typical of the area’s limestone outcroppings. Along with other ash trees, it’s a member of the olive family, meaning it’s related to other well-known plants, including forsythia and lilacs. To the naked eye, this species is fairly difficult to distinguish from its ash tree cousins, though it has some rather unique differences.

Although it’s still susceptible to the emerald ash borer—which is terrorizing ash trees from New York to Georgia and creeping west—blue ash tends to have less of a problem with it. The lilac borer, on the other hand, seems to be its major enemy.

The bark of the blue ash is typically a lighter color and is more plated, as opposed to the white ash, which has more fissures.

One of the easiest ways to identify a blue ash is by holding a twig in your hand. It will have a more square shape to it than the typical rounded twigs of other trees.

The blue ash received its name thanks to the blue dye it left on the hands of its first handlers. Underneath the tree’s inner bark is a gelatinous substance that turns blue when exposed to air. It was used by the early pioneers as a dye, predominantly for textiles.