Getting good pork to market starts with loading pigs into a trailer. 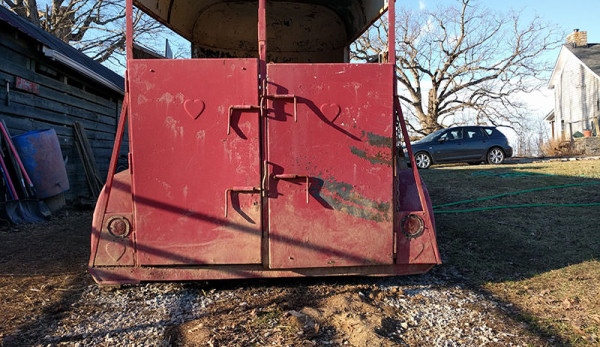 When we, the three generations of farmers on our land, first brought pigs onto the 12-acre homestead, the venture was equal parts hare-brained and considered: It was a rash decision, prompted by the provisionÂ of two piglets by our farming friends, but these friends also offeredÂ free, on-call advice whenever we needed itâ€”and we needed it often, like when the pair escaped and went for a walk down the driveway or when we suspected our feed supplier of misrepresenting protein levels.Â But what neither we nor our mentors figured out in time was the best way to load a hog onto a trailer.

When it came time for our pair of pigs, grown and ready for their trip to the processor, to take a ride in our little new-to-us livestock trailer, we figured we could wing it. How hard could it be? These pigs knew and trusted us, and we’d surely be able to coax the animals into the trailer without too much fuss.

It took fussâ€”too much fuss.

For starters, the sudden presence of our new red trailer tipped them off to something being up. Their suspicion wasn’t abandoned when food was offered, and they were generally disinclined to board the trailer. When a pig is disinclined to move, a pig will sitâ€”and when a 300-pound creature sits, there is little a farmer can do to move that creature. For about three hours of the coldest day of our first year farming, my wife, father and I pushed, poked and prodded our pigs to no avail. We’d heard tell of a farmer riding a hog into a trailer, so my dad tried thatâ€”and ended up sitting on the frozen ground himself.

Finally, we askedÂ my mother to call the processor and alert them we’d have to miss this dateâ€”that we’d never get the task done in timeâ€”and while she was on the phone, we mustered up one last burst of willpower and pushed aÂ hog into the trailer, prompting the other to race inside behind him. Slamming the doors on ourÂ animals, we breathed a sigh of relief and vowed to figure this out before the next delivery.

We didn’t. With each subsequent load, we tried something new, settling for a while on a 5 a.m. rise time for an of hour chasing pigs through muddy fields. We often received painful shocks when a hog bumped us into electric fencing. Our team grew adept at wielding pushboards and muscling pigs through particleboard loading chutes, but it was never easy work, and we were often dead tired before we embarked on the hour-plus drive to the processor.

Our current loading technique, though, is a lot different and takes just 5Â to 10 minutes. No one gets shocked, lands on the ground or even breaks a sweat. Most loads border on easy. Here are some tips for loading pigs from someone who’s done almost every wrong thing in the book and finally learned a better way.

1.Â Bring The Trailer Around Sooner

I donâ€™t know why it took us so long to figure this out, but rolling a large piece of equipment into pigs’ familiar habitat and expecting them to waltz inside is a bit impractical. Now, we build our pastures with a removable section of electric fencing, providing a space we can back the trailer into well in advance of processing day. Pigs adapt to its presence so that when we need them to enter it, they donâ€™t view it with fear. We typically introduce the trailer a few weeks before the scheduled slaughter date and, as we deliver our litters in batches of two or three, reinstall the trailer upon return from the processor.

2.Â Feed The Pigs Inside

Pigs love to eat, but not so much that they’ll blindly follow a bucket into a trailer. We now install a feeder inside the trailer and deliver rations inside. (Establishing feed times, rather than using a continuous feeder, helps with this, too.) The pigs are hesitant at first, and they often forgo a meal when the change is introduced, but soon enough, a few brave pigs will venture inâ€”at which point, we resume feeding the outside-lingering pigs after the trailer pigs. When the day arrives for the door to close behind a few of them, they’re already where they need to be. And when the trailer returns to the now-smaller herd, the next-bravest pigs replace the missing for in-trailer meals.

Many livestock trailers can be cranked up to bringÂ the back of the trailer close to the ground. Animals in general, and pigs specifically, don’t like to step up into something, so cranking the back fender down as close to the ground is essential for easy loading. The upward-angled floor does give hogs pause, but they’re less concerned with it than that initial step.

For the longest time, we believed it necessary to load pigs in the early morning hours to avoid overnighting them in the trailer, but once we finally tried it, we never went back to 5 a.m. loads. I’ll admit it’s nerve-wracking to leave pigs in a trailer overnightâ€”they can move it around a bit, and the noisier ones may prompt a middle-of-the-night hog checkâ€”but we’ve never had one escape the metal boxâ€”and it’s not for lack of trying. Livestock trailers are built to contain animals, and allowing the pigs a night to acclimate to the trailer generally results in calmer pigs when you arrive at the processor and need to coaxÂ them into a holding pen.