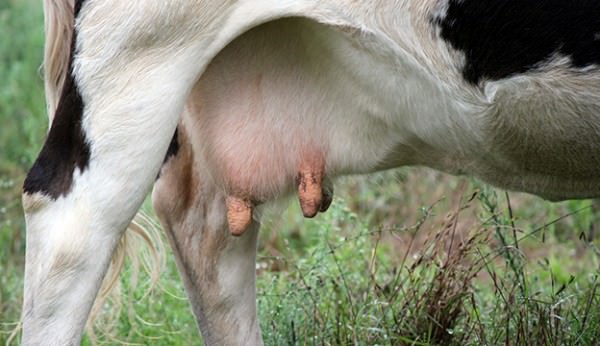 If you’re a dairy farmer, it’s your business to know your animals’ udders and teats as well as you know your own body. However, when you’re breeding animals, udders and teats don’t get as much attention: You don’t handle them twice each day, and you might even forget they’re down there doing an important job.

Livestock species have varying udder and teat anatomy, but the basic premise is the same for each. Their udders can support tremendous weight—milk weighs 8 pounds per gallon—using a system of ligaments that attach to bones, membranes and tendons. The udder’s external placement and delicate, relatively hair-free skin leaves it vulnerable to physical problems, such as scrapes and lacerations, and the anatomy of the small teat canal invites internal issues, such as mastitis. For body parts that don’t get much consideration, the udders and teats have a lot that could go wrong.

An infection of the mammary glands is the most common udder issue a farmer will experience, and all lactating animals are susceptible. “[Mastitis] begins where you are housing the animals,” says Dave Scott, a former dairy farmer, a sheep farmer and a livestock specialist for the National Center for Appropriate Technology in Montana. “You want to have them clean and dry. … Anytime you have mud, you are predisposing the animal to mastitis.”

Particularly during the winter and early, the barn lot might not be the cleanest, driest place for a lactating animal. A well-maintained pasture or clean, well-­bedded barn is a good place to get animals out of the muck, though Reid Redden, Ph.D., a sheep and goat specialist for Texas A&M AgriLife Extension, cautions against crowding animals into small areas, as this can increase disease transmission.

“The only way the mastitis organism can get into the udder is through the teat end,” Scott says, meaning mastitis-­inducing bacteria—including Staphylococcus spp., Streptococcus spp. and Enterococcus spp.—can’t cause mastitis via a scrape or a food source.

Once infection sets in, the udder might become red, swollen, hot and painful, so the animal will probably push away its baby—a bad situation for the adult and the offspring. If left untreated, mastitis complications include:

Mastitis is treated with antibiotics, which are not allowed under USDA certified-­organic rules, so organic operations need to place their emphasis on preventing mastitis.

Mastitis-causing bacteria are always present, but there are a few times when mastitis incidences spike. After birthing and after weaning are prime times for mastitis to set in, says Redden, who suggests talking about mastitis treatment options with your veterinarian before birthing begins on your farm. You can help prep your mama livestock for weaning by feeding less to reduce milk production starting about a week before.

“After weaning, maintain dams on a marginal diet for another week,” Redden says. “Low-quality hay without any grain or other supplement is recommended.”

Additionally, he recommends avoiding the handling of dams after weaning to limit trauma to inflamed udders.

In the summertime, flies can be major mastitis carriers. Scott explains that the flies will land on the animal, walk across the tip of the teat and deposit bacteria that can work its way into the teat canal. This is yet another reason why reducing the fly population is important.

Hardbag is caused by ovine progressive pneumonia, a viral disease that affects sheep. Redden says OPP is relatively common, and according to Neil Dyer, D.V.M., director of the North Dakota State University Veterinary Diagnostic Laboratory, OPP typically occurs in 2- to 3-year-old sheep but can be seen at any age. The animals may not show symptoms at all or may present a range of symptoms, including:

The virus is transmitted via colostrum, potentially in utero and through nose-to-nose contact. Vaccines and treatments are not available, and the best means of guarding against OPP are biosecurity and testing sheep before they join your flock.

In the wintertime, frozen teats can be an issue in the weeks just before an animal is due to give birth, Scott says. Frozen teats are like a burn on the skin. A scab forms, and the skin is extremely sensitive. As you might guess, that animal will want nothing to do with being milked or nursed. The scab, too, can harbor bacteria, placing a source of mastitis infection very near the teat opening.

Preventing frozen teats is the goal, as once damage sets in, the skin has to heal from the inside out, which could take two to three months, Scott says.

For animals that are nursing, frozen teats aren’t an issue.

“[The baby] keeps that udder supple, and it’s milked out quite a bit,” Scott says. “When they’re dry and not milking, there’s really no danger of frost in that state because there’s no edema, no swelling.”

Keep an eye on animals due to give birth as their udders develop and tissues receive additional blood flow. Scott explains that dairy breeds would be most susceptible to frozen teats because of their significant udder development. Beef cows and horses, while they do start making their udders two to three weeks ahead of birthing, don’t have the same edema as a dairy animal so they’re probably going to do OK. Sheep, too, are fairly well-protected, as long as they have their wool coats.

Animals’ udders are best protected by warm, dry places with deep, dry straw bedding when the temperature is below 10 degrees F. Dairy animals benefit from having a frost protectant applied to their teats after milking, but that’s less practical for breeding animals. Still, a protectant dip or salve is an option if your winter is rough and your breeding animals are sensitive.

Scott’s recommended salve contains one part petroleum jelly and one part scarlet oil, combined just before applying to the teats. If using this on a dairy animal, this will wipe off when you clean the teats before milking. A little goes a long way: 1 pint of each ingredient should last 10 years for a single animal.

All livestock species have a ligament that divides the udder into left and right halves. As the udder fills, the space where these halves come together traps bacteria and moisture, which is a great recipe for skin issues. Udder sores and fungal infections are not uncommon, especially in the first 90 days after birthing, Scott says. These, of course, increase the risk of mastitis because of the harboring of bacteria.

Keeping your breeding animals clean and dry will help prevent udder sores and fungal issues. If these do creep up, your veterinarian can offer a remedy, which might include a prescription ointment.

The future of your herd or flock is on the line with udder and teat health. This season, turn your attention to these parts that are so often overlooked, and keep them in the best condition possible.

[…] is an inflammation or infection of the udder, aka mammary gland, of dairy animals. It can have different causes, but the most common is […]