Are you looking for unusual chicken breeds to beautify your backyard flock? Check out these four exotic birds from across the Atlantic. 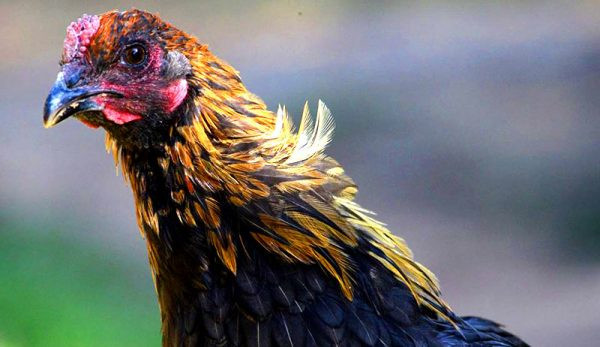 Ask any 10 chicken owners what their favorite breed is and you’ll probably get 10 different answers. Factors such as foraging ability, egg color and production, temperament, and hardiness all influence a chicken-keeper’s personal preference. Still, chances are you’re bound to hear such breed names as Rhode Island Red, Plymouth Rock, Wyandotte and Brahma, some of the most popular breeds developed and raised in the United States. Chicken breeds you might not hear about too frequentlyâ€”or at allâ€”include the mysteriously monikered Deathlayer and Liege Fighter, the tenacious Orust, and the charmingly dubbed Dumpy, all developed in other countries. Read on to learn about more about these four unusual European chicken breeds you might want for your flock.

Given its name, you’d think the Deathlayer is the chicken of choice for Goth and punk-rock poultry farmers. In fact, this stunning, centuries-old breed would beautify any flock with its fancy pencilling, vivid coloration and bright black eyes. Available in silver and gold varieties, the Deathlayer is a fabulous free-ranger whose highly productive hens are said to lay an egg a day until the day they die. While this hasn’t been officially documented, Deathlayersâ€”the name is a literal translation of this German breed’s name, Totlegerâ€”do produce a prodigious number of white eggs.

The roosters are especially eye catching, with a luxurious plume of iridescent-black tail feathers and cherry-red wattles and cushion comb. As adults, Deathlayers average about 4 pounds in weight (female) and 5 pounds (male), the perfect size for a backyard flock.

Originally bred to dominate the European cockfighting ring, the Luikse Vechter or Liege Fighter is a powerful fowl with an upright, intimidating appearance. Its slightly hooded eyes and sleek game-bird profile give this Belgian bird an almost predatory look, and its sizeâ€”roosters can surpass 2.5 feet in height and 12 pounds in weightâ€”make it one of the largest chicken breeds around.

Although the Liege Fighter seems fierce, it is very friendly toward its humans. Hens tend to be tranquil and productive, laying an abundance of cream-colored eggs. Roosters make excellent flock guardians and, with their enormous feet and heavily muscled legs, prove extremely effective against avian predators.

Also known as a Creepie and a Crawler, the Dumpy dates back more than a millennium to a time when Pictish warriors battled for supremacy in what is now Scotland. Back then, Dumpies were kept in battle camps to warn the Picts of approaching enemies. Today, this beloved heritage birdâ€”one of two chicken breeds traditional to Scotlandâ€”is considered rare and endangered. Its decline in part can be blamed on its unusual physiology: The Dumpy has extremely short legs that are a serious mismatch for its very low, heavy body (adults average approximately 7 pounds). As a result, the Dumpy noticeably waddles, cannot outrun predators and has great difficulty navigating any kind of slope, obstacle or uneven terrain.

The Dumpy does best as a backyard bird, happily ranging and foraging in a protected, well-tended yard and garden. Its quiet, docile demeanor make it ideal for families with children. Dumpy hens are prolific layers of tinted eggs and make wonderful broodies and mothers. Dumpy chicks require special care, however, as their tiny legs can keep them from accessing standard infant-poultry waterers and feeders. The Dumpy is considered to be very cold hardy, despite its inability to move easily in snow.

From the harsh, windswept coast of western Sweden hails a bird that seems more fairytale than farmyard. The rare Orust chicken originated along the rocky shores of Orust Island, where it hunted along the desolate coastline for the fish it needed to survive. Its exotic coloration originally served the Orust as protective camouflage, hiding it from predators as it scavenged amongst the rocks. These days, the Orust’s striking black-and-white mottled patternâ€”which extends into its leg scalesâ€”make this one of the showiest of all chicken breeds. Ideally suited for cold climates, the Orust is an excellent forager and a prolific layer of white eggs. An unusual trait of the Orust rooster: Its wattles turn iridescent violet whenever the bird becomes agitated, a condition that frequently occurs because males are very protective of their hens.