Save yourself some money feeding your livestock this winter by setting up a hay feeder that reduces waste. 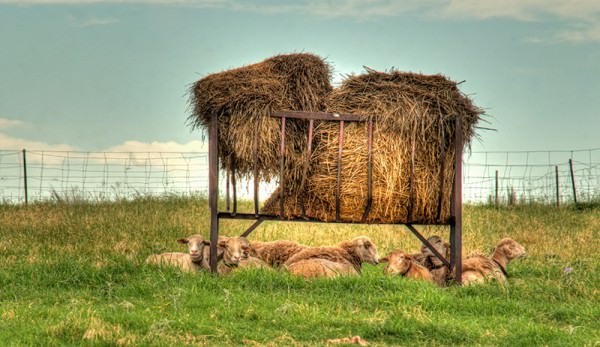 Hay can be the most expensive element of keeping livestock over the winter. Depending on your climate and property, itÂ may even be a pricey piece of your livestock budget all year long. Finding a good deal on hay or learning to make it yourselfÂ are ways to maximize your hay dollar. Then you need to feed it efficiently, as every mouthful of wasted hay adds up to wasted money.

How you feed hay will depend on the amount of time you have to devote to your livestock, your hay-storage capabilities and your farm’s setup. The location of your hay feeding routine has an effect on how much hay your animals waste. The University of Missouri Extension suggests that if you’re feeding hay in the same location all the time, you should provide some kind of footing, such as crushed gravel or concrete, to reduce mud. Consider building a sacrifice lot for this purpose. If an area with improved footing isn’t an option and you have enough land to do so, regularly move your hay-feeding area to different parts of the pasture so one part doesn’t get too torn up.

The quality of your hay, of course, also has an effect on hay waste. Horses should never be offered moldy hay. Some horses have no inclination to eat moldy hay, but others definitely will, and the mold can cause colic and respiratory issues. Ruminants are less affected by mold but still can be made sick from it. Cattle and sheep generally will steer clear of moldy portions of hay, pushing it aside and trampling it. Look at your hay production and storage methods to reduce the amount of moldy hay that you have on hand.

There are a number of ways that you can feed hay to your livestock, including these four ways common on small-scale farms.

This may be the most common way hay is fed to livestock, though it’s also the most prone to waste. You can just set a round bale in the pasture and let the animals go after it, or you can cut the strings and unroll the bale, spreading out the forage. Unrolling the bale doesn’t cause such significant compaction of the ground around the hay, and it spreads out the nutrients from the animal waste and the hay waste to fertilize the pasture.

Feeding round bales requires the use of a tractor or a well-planned means of situating bales so you can roll them where you need them.

Whether feeding round bales or square bales, a feeder will reduce the amount of hay that gets trampled, soiled and ruined. This is especially true if you’re feeding more than one day’s worth at a time.

You need to offer 1 foot of outside bale diameter per cow per day so that everyone can have their turn eating, according to UM Extension estimates. Take into account that cattle at the top of the pecking order will bully their way to the best-quality hay first, so you might need to provide more feeding space to give less dominant animals a shot at better nutrition.

You can assemble round-bale rings and square-bale feeders yourself if you have welding skills; they can also be purchased new or found used online and at farm sales. Be sure used feeders are sound so they won’t collapse after one winter’s use, and keep them free of sharp points that could injure your animals.

Square bales are the easiest hay to handle, requiring no equipment to stack, move or feed, though handling and feeding costs are two to four times more expensive for square bales than for large, round bales, according to the UM Extension, because making them is a very hands-on process. The small size of the square bales makes it easy for you to stack and store them to maintain quality, and it makes it easy for you to feed them at more frequent intervals. Both of these advantages leads to less hay loss come feeding time.

Horse owners might feed fromÂ hay nets or bags. (Generally, the hay is pulled from square bales.) These nets and bags are small and generally only hold one feeding’s worth at a time. The horse may pull hay out of the bag and drop it on the ground, but it will also usually clean up this little bit that is dropped, so there isn’t much waste.

These nets and bags pose another issue, though: A horse can get a leg caught in a net or bag and injure itself. If you are using one, tie it high and tight enough that the horse cannot yank it down and is unlikely to reach it with its hooves.

As winter approaches, get your hay-feeding plan in order. Any investment you make in feeding infrastructure will likely result in a forage-loss savings over time.