4 Ways To Go Wild With Your Diet

Think about what living off the land could truly look like with these wild-game meat alternatives. 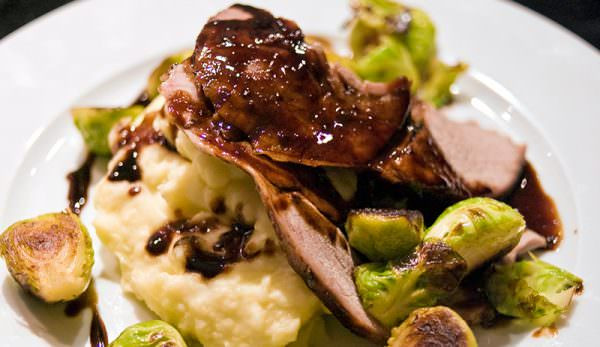 Have you ever wondered what the American diet would be like without domesticated animals as meat sources? What would it be like to rely on what is locally abundant and legally permitted for hunting? Because Iâ€™ve never hunted, my experience preparing wild game has been pretty limited and Iâ€™ve relied on others to do the crucial act of tracking down a creature and processing it into the meat that I can cook at home.

While many people immediately think of deer, rabbits or wild turkeys when it comes to hunting, Iâ€™ve come across several interesting recipes that have expanded my imagination on how to serve up lesser-known wild game. Hereâ€™s some food for thought, so to speak, if youâ€™re seeking a more off-the-land eating experience.

For most Americans, especially those who are beginners to cooking with wild game, something small and close to home might be a realistic place to start.Â Slow Cooker Squirrel and VeggiesÂ is perfect for beginners. Itâ€™s hard to mess up any meat if you put it in a slow cooker. I had my first taste of rabbit this way, and it was surprisingly tender, moist and delicious. Most people would say squirrel, with its dark, lean meat, tastes similar to rabbit. The downside to consuming these smaller animals is the number of little bones, which are hard to remove, and the lower meat-to-bone ratio. It could take a few squirrels to fill a large crock for a stew, but they are certainly abundant.

Abundance is name of the game with wild pigs, whose U.S.Â populations reach about 5 million. Feral swine are an introduced species running rampant across most of the country, especially in the Southwest. I first learned of them while I worked as a park ranger in Texas and couldnâ€™t believe the immense destruction they cause to the landscape. Theyâ€™re extremely intelligent and, like raccoons, can quickly figure out theÂ devices people use to try to trap or contain them.

While population control is an understandable motivation for hunting, itâ€™s also an opportunity to provide an abundance of meat to local consumers. The flavor of a wild pig will depend on what the animal was eating, which, as Hank Shaw, writer of Buck, Buck, Moose (H&H Books, 2016), explains on his website, could be anything from juniper berries to barley sprouts. A safe bet for good flavor is his recipe for a spicy chorizo sausage.

If poultry is more your thing and you love the idea of contributing to native prairie restoration, you might consider wild bobwhite quail on the grill. Like deer, elk, turkey and trout, farm-raised quail is commercially available, but in some natural areas focusing on quail habitat conservation, populations have reached a stable enough point where hunting is carefully managed. The more I understand about where these birds live, the more I care about conservation of grasslands, one of North Americaâ€™s most threatened ecosystems. Also, the refreshingly simple little call of the quail, bob-white!, is a sound I equate with wide open spaces and fresh air.

Did you think that the muskox was a thing of the past, gone with the last ice age? Not quite. In Alaska and northern Canada, this distant relative of the goat has been reintroduced after being hunted to near extinction. It’s massive, long-haired and can survive on the mosses and lichen of the tundra. The dense and sublimely soft undercoat is one of itÂ secrets toÂ survival. Interestingly, for a cold-climate animal, itÂ has very little fat in itsÂ meat, which means the burgers will not shrink much and you may need to add oil to muskox meat as you cook it. Try these recipes if youâ€™re looking for a place to start: Muskox Burgers or Stuffed Musk Ox Tenderloin with Cranberry.

Are you really tired of eating the same old chicken and beef, and your palate is ready for something wilder? Iâ€™m not advocating for switching to an all wild game diet … yet. But maybe itâ€™s time to take a moment to think about their origins, their landscape and why regulations are in place to allow us to hunt them. For the pigs and squirrels, consider why it is that there are so many of them and that humans have replaced the top predators, keeping their populations in check. For the muskox and quail, think about how we have realized our own destructive practices before almost completely exterminating their populations and restored their habitat to a point that we are now responsible for maintaining and monitoring their health.

Wildlife is more than â€śgame.â€ť They connect us to wild lands and remind us we are all connected and all rely on access to land, air and water that is safe and clean.