4 Ways To Handle & Use Loose Hay

What's the best way to handle and use loose hay? There are a surprising number of options. Here are four to get you started. 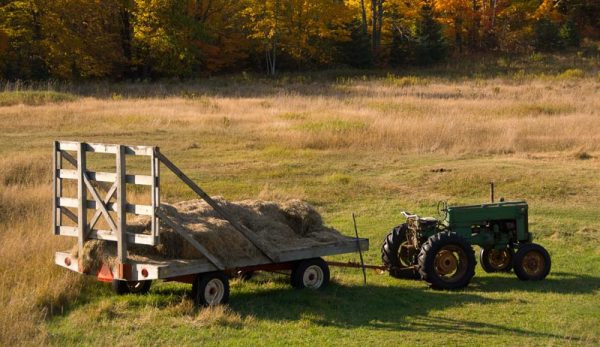 During a recent stretch of hay baling on my farm, both the primary hay baler and the backup baler ran into issues, forcing us to gather raked hay by hand before a rainstorm could strike.

This got me to thinking about loose hay in general, and the best ways to handle it and use it.

Maybe youâ€™re like me and youâ€™re rescuing forage hay off a field when a baler malfunctions. Maybe the twine snapped or slipped off a bale during transport, and youâ€™re left with a (surprisingly large) mess of loose hay far from where you intend to feed it. Or maybe youâ€™ve been feeding hay for months and your barn has accumulated a lot of loose bits along the way. (Hay bales do tend to shed, and those small amounts can add up.)

Regardless, if you have loose hay on hand, take heart. There are plenty of options for dealing with it and putting it to good use. Here are four to get you started:

1. Return Loose Hay to Your Fields

If youâ€™re dealing with a small amount of hay and itâ€™s largely dust, perhaps the simplest solution is to sweep it up, load it into a trailer (a pitchfork and large shovel work great together), and spread it on one of your fields.

You might as well return the nutrients to the soil. Just be careful to spread it thin enough so it doesnâ€™t kill the grass underneath.

Read more: When making square hay bales, make sure they’re not too loose.

2. Gather It in Boxes & Feed Loose

Last winter, I had to deal with a large amount of loose hay generated when small square bales kept bursting free of their twine. It was mostly in the form of bale flakes, so I found I could place the flakes in boxes and transport the boxes around like hay bales.

It was, I admit, a little awkward. But at least the hay stayed in a convenient form for feeding.

I elected to box up loose hay last winter because I couldnâ€™t access my hay baler, which was trapped under a lean-to blocked by snowbanks and related pieces of seasonal equipment. But during the spring, summer, and fall, Iâ€™m happy to spread loose material on the ground and bale it back up with the speed and convenience of my baler.

The effort isnâ€™t necessarily worthwhile for a small amount. But if youâ€™ve found yourself with a large volume of loose hay, baling it can save time and effort compared to other solutions.

Read more: Think ahead about equipment accessibility this coming winter!

If you donâ€™t want to feed your loose forage, consider putting it to use in a different manner. Hay can be suitable as mulch in garden beds and around trees, boosting water retention and providing insulation against winter cold.

A word of warning, though. Hay may contain seeds that can germinate in your soil, so pay attention if strange plants start growing where you laid down hay mulch.

One thing is certain. There are plenty of ways to use loose hay. And youâ€™re bound to find an option that makes sense for your situation.