In researching an article I recently wrote, I came across some interesting information about preventing Japanese beetles in the garden. I thought I might share the advice with you now so you'll be better prepared to battle them next season. 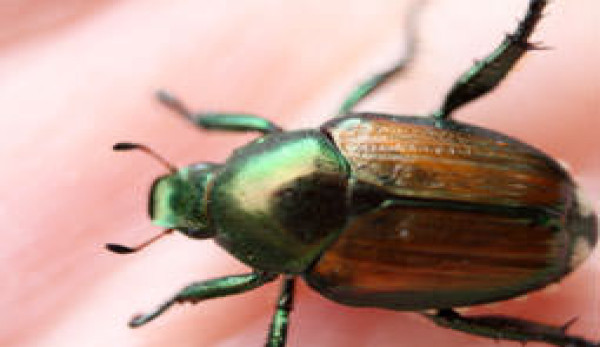 In researching an article I recently wrote, I came across some interesting information about preventingÂ Japanese beetles in the garden. I thought I might share the advice with you now so you’ll be better prepared to battle them next season.

1. Don’t ignore the newly emerged adult Japanese beetles.
Although they live for only 30 to 45 days, the adult Japanese beetles can cause significant damage in that short amount of time. They feed and mate in groups, and as they feed, they release attracting pheremones to lure more beetles to feed and breed on choice plants. This means that early and frequent hand-picking goes a long way toward preventing massive population levels. Knock the adults into soapy water or squash them.

2. Forget Japanese-beetle traps.
Research at several universities shows that pheremone and floral scent-based beetle traps lure in far more Japanese beetles than they actually trap, causing heavier feeding in areas where the traps are located. Either donâ€™t use them, or place them several hundred feet from the yard and garden.

3. Quit watering.
Not only do the female Japanese beetles need soft, damp soil to tunnel down and lay their eggs, but the eggs and young grubs themselves need moisture to thrive. Donâ€™t water your lawn when the females are laying eggs in mid to late summer. Instead, allow your lawn to go naturally dormant in summerâ€™s heat. Youâ€™ll be reducing next yearâ€™s beetle population.
Â
4. Don’t overdo lawn care.
Japanese beetle grubs tend to cause the biggest problems in lawns that are fed excessive amounts of chemical fertilizers and are frequently but shallowly irrigated. Egg-laying female beetles are attracted to the lush, green growth of over-fertilized lawns, and both excessive fertilizer applications and shallow irrigation encourage the roots of turf grass to remain only within the top few inches of soil. Such a shallow root system is far more prone to damage from grub feeding than lawns with deeper, more extensive root systems.