4 Ways to Protect Your Pumpkins From Vine Borers

If squash vine borers are on your farm and protection isn’t in place, don’t count on growing your own Halloween jack-o’-lantern this year. 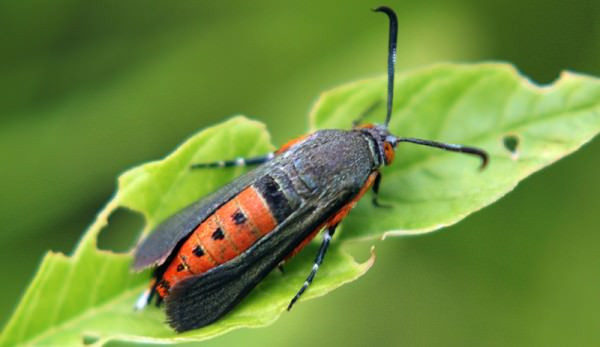 It has happened to many a gardener: We have a beautiful zucchini or pumpkin vine that is growing strong, and all of a sudden it withers and dies. If your beloved cucurbit showed no other signs of disease, the squash vine borer is a likely culprit.

About the size of a wasp, squash vine borers are moths that lay eggs in the vines of squashes and pumpkins, favoring summer squash and zucchini in particular. The eggs hatch into larvae that look like white grubs, which bore into the stems of the plant, often killing it. Next the larvae burrow into the ground, build a cocoon, pupate, and settle in for the winter, emerging the following year to start the cycle over again. It’s possible to have the squash vine borer on your crop and not be aware it if only a few plants here and there mysteriously die early in the season.

The University of New Hampshire Cooperative Extension has been studying this cucurbit pest for eight years as part of its Integrated Pest Management Program, funded by the New Hampshire Department of Agriculture, Markets and Food. The program, which started in the southern part of the state, expanded north in 2013 due to additional funding. The goals of the IPM program are to see how insect pests are operating in New Hampshire and gain valuable information to help growers manage insect pests with fewer insecticides.

Working with 11 farms and IPM scout Michelle Aurelio, the NH Cooperative Extension has been tracking the squash vine borer, as well as four additional insect pests that attack sweet corn, berry and pumpkin crops. On a typical day, Aurelio ventures out armed with a magnifying glass, a stash of lures and baits, and a clipboard to check the traps set at participating farms, count trapped insects, and report those numbers back to the farmers and the project.

Squash vine borer lures look like little rubber stoppers and fool the insect into thinking a potential mate waits for them in the trap. In the weeks after placing the traps, Aurelio found the squash vine borer at seven farms throughout the project area.

Once a bane to southern farmers, the IPM project shows the squash vine borer is slowly making its way north, but according to the NH Cooperative Extension, no matter where you are, there are several things you can do to protect your pumpkins and other cucurbit crops from squash vine borer damage.

Moving your crops to different plots makes it more difficult for the squash vine borer, as well as other pests and diseases, to attack your crops. If you don’t have the space to move them more than a few feet, growing cucurbit plants every other year yields the same effect.

Deep tillage in the fall or the spring will also help as long as the infestation isn’t severe.

Another option is to grow butternut squash instead of other squashes, pumpkins and zucchini. According to the NH Cooperative Extension, the squash vine borer prefers other cucurbit crops to the butternut, and larvae that are laid in butternut vines are less likely to survive.

A final option is to use row cover, which prevents the squash vine borer from landing on your plants. Once the plants begin to flower, remove the cover so pollination can occur. While the floating row cover is not a fool-proof solution, it can minimize the damage from the borer, as well as other pests, like the striped cucumber beetle.