5.5 Garden Chores You Can Skip This Year!

OK, maybe “skip” isn’t the right word, but we can definitely help make those dreaded garden chores much easier. 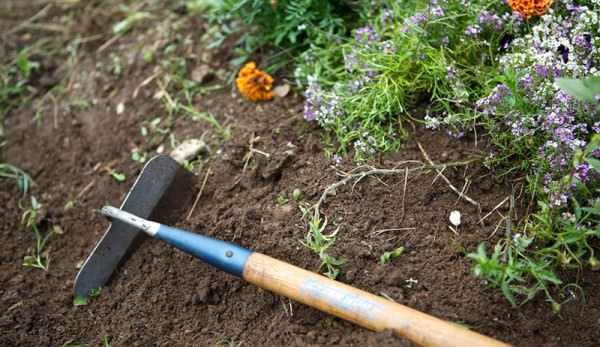 Most people who garden love it, and some who don’t really love it do it from necessity, but it’s probably fair to say that if you truly hate gardening, you’re not doing it. Still, there are those chores we all dread. What if I told you there are ways to get out of a lot of them?

Probably No. 1 on most people’s list of hated garden chores is weeding. Repeat after me: “Mulch is my friend.” Even if you start with a weed field, you can layer enough heavy mulch—truckloads of straw, spoiled hay (watch for sprouting seeds, though), leaves, grass, chips from the city tree trimmers, old newspapers and flat cardboard boxes—at least 2 feet deep, leave it there for a year, and get great garden soil underneath. That’s the slow way, but it works if you can get your hands on enough truckloads or only want a small garden. More quickly, you can till—or hire someone to till—the field several times over a month or so and then mulch with less.

As for me, I use a combination of the above methods. In late summer and fall, as areas of the garden are emptying, I wheelbarrow donkey, goat and chicken manure from my barn and dump it in small piles around the garden. In late fall, I till this all in with my Mantis tiller (worth its weight in gold). Then I cover the garden with the immense contributions of two massive oak trees nearby. By spring I can pull back leaves and find lovely soil. This is not weed-free, in my experience, but it hugely reduces the job. And when things like onions, garlic, or carrots are close together, I still get down on my hands and knees. Truth be told, weeding isn’t so bad—unless it’s horribly hot!

OK, you can’t really get out of this one, but it’s worth noting that a heavy, organic mulch will also cut down hugely on your watering chores. If Mother Nature doesn’t completely cooperate, then you will still have to help. Make it as easy on yourself as you can, with strategically placed rain barrels. And don’t water the garden; water the plants! This means aiming for the roots under biggest drinkers, like fruiting tomatoes, cukes and melons. When I plant a hill of melons or squash, I put a tall, bright stake at the center of the hill, so that after they’ve turned into Cretaceous Period jungle, I can still see where to put my water.

If you have access to a barn, your own or that of someone nearby, that offers free Black Gold to those who help muck out, then you have fertilizer, and you can find a jillion articles online about making your own compost, but you might not know you have a constant source of fertilizer that is always available, wherever you are, whoever you are, free of charge: pee!

Human urine is bacteria-neutral and contains the Big Three: nitrogen, phosphorus and potassium. You don’t use it straight, as it would burn plants the same as any fertilizer. Instead, dilute it with 10 to 20 parts water, (the lower amounts being for acid-loving plants, like blueberries and azaleas) and water with it. You can also use it in homemade fertilizers, compost teas and so on, and it’s said to be a great compost starter. I’ve just begun with this and am eagerly waiting to see if I get more blueberries this year!

If you are interested in organic pest control, there are endless books, magazines and websites about it. Every one of them will tell you step one is growing healthy, resistant crops. However, since I moved to Kentucky 10 years ago, I’ve been stunned at the plague-level swarms of two particular pests: Mexican bean beetle and Colorado potato beetle. They aren’t affected in the slightest by any organic practice I’ve ever heard of, let alone tried, but I figured out how to foil them, just the same.

Warning: This tip actually creates more work, but only at first.

I grow potatoes, beans, and all cabbage crops (because cabbage moths are almost as bad) under cover. This means building the frame—that’s the hard part—and covering and uncovering it at the beginning and end of the season, which doesn’t take as long as fighting pests!

I found the best source of fine netting that is strong enough to hold up under several seasons of use is the kind of crinoline used for ballerina tutus. I bought a whole bolt at least eight years ago and will just now have to get more for my low frame. It’s easy to raise while you’re working, but watch out for bugs sneaking in!

My “screenhouse,” as I call it until I cover it with plastic for the cold monthsis covered with metal screening. I ordered a 125-foot roll of it at a local hardware store, cut it with a utility knife, and “sewed” it onto my frame of bent cattle panels fastened to fence posts with the fine wire the roll had come wrapped in. My doorways are pretty haphazard. I need to make real ones, but I’ve grown a lot of food in here, with very few pests!

This is my own particular dreaded chore. I usually put it off until it’s pointless. Lettuce and other greens are fine—you just eat the thinnings—but everything else seems like such a waste! Carrots are the absolute worst.

Last year, I finally gave in and disciplined myself to actually take the time to place individual carrot seeds. Oh, what a job … except, it really wasn’t. It took maybe 10 minutes, if that, and later, it was easy to pull out the inevitable few that got too close anyway. Best of all…I got the best carrots ever in all my years of gardening. I just ate the last ones in March. Completely worth it!

One way to help you space small seeds easily is to lay down an old scrap of chicken netting. Put one seed in the middle of each hole, and don’t cover until you’re done, so you can see where you’ve been. Take away the netting, sprinkle dirt, and voila! A neat carrot bed you won’t have to thin. I won’t mention the lazy way I planted corn last year—and the way the entire bed blew down because they were all weak and spindly.

You don’t even have to harvest! There are plenty of birds, rabbits, raccoons and crows who will happily do that for you.

OK, no, I’m not really going to suggest not harvesting those hard-won crops, but there are plenty of ways to share the work. Gleaning is an ancient practice that is seeing a revival. In old agricultural societies, landowners were to leave edges and corners unharvested and not go back for what they dropped during grain harvests, giving those with few resources a chance to help themselves while retaining their self-respect. You can “adopt” a local individual or family who is having a hard time and offer to share both the work and the bounty (and some education, as well). Or, if you have space, you can offer a plot for someone else to work. I take 10-percent of all my produce to a local food bank. You could partner with a local human services department to find out who needs help. Or, you could bribe a kid or two!