5 Dangerous Chicken Diseases (And How To Avoid Them)

Keep your flock healthy and lower the chances of menacing maladies. A clean coop and common-sense hygiene can protect against these five diseases. 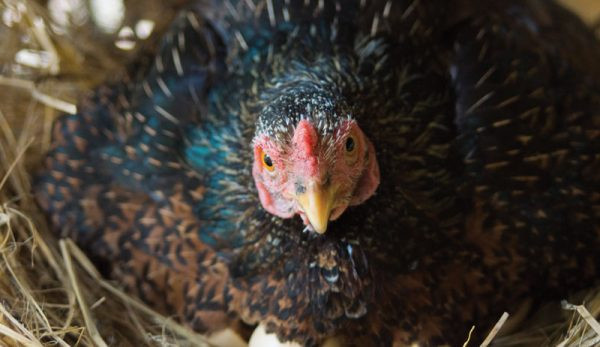 For most of us, our chicken coops are a point of pride and are as much a part of our landscape as the barn or garden. Innovative coop designs, roofs topped with weather vanes, comfy nest boxes and colorful decorations add to the fun of keeping chickens. But it‚Äôs easy to forget about the less-than-lovely reality: The same organisms that cause diseases in large-scale commercial poultry houses and hatcheries can inhabit our coops, too. No matter how charming our henhouses are, diseases can lurk right under the surface.

Several living organisms that occur with poultry affect people as well as chickens, and several affect only poultry. Many are easily preventable with common sense and good hygiene. Some are naturally occurring within the birds or are found in the environment and thus require additional treatment through vaccination or medicated feed.

By far, salmonella is the No. 1 disease that poultry keepers need to be concerned with. There are many strains of salmonella‚ÄĒtoo many for the scope of this article‚ÄĒbut the three we need to know about are Salmonella pullorum and gallinarum, which can sicken chickens, and Salmonella enteritidis, which can sicken us from the food-safety standpoint

Chickens carry salmonella naturally, and select, few strains can be passed from the hen to the chick through the egg, including enteritidis. It can also contaminate the coop through feces.

Chicken manure doesn‚Äôt remain on the floor like that of other livestock. It becomes aerosolized; in other words, the feces become dust, which coats everything in the coop, including eggs. Therefore, it‚Äôs incredibly important to refrigerate your eggs as soon as possible because the longer each egg sits out at room temperature, the more the salmonella is pulled into the core of the egg.

However, it doesn‚Äôt really matter if your eggs are contaminated, so long as you cook them. Cooking destroys salmonella. You can, however, still get sick from eating products that include raw eggs in the recipe, such as mayonnaise, Caesar salad dressing, raw cookie dough or uncooked meringue.

‚ÄúIf you‚Äôre making scrambled eggs, make sure to use one utensil to whisk the raw egg and a clean one as the eggs are finishing,‚ÄĚ Wakenell says. ‚ÄúThe heat isn‚Äôt going to happen fast enough to kill salmonella on the first utensil, so you‚Äôll be carrying salmonella into your scrambled eggs.‚ÄĚ¬† ¬†

Wash your hands thoroughly after handling poultry, and, as tempting as it is, don‚Äôt hug or kiss baby chicks. ‚ÄúThere have been many cases of people getting salmonella through hugging and kissing baby chicks,‚ÄĚ Sato says.

Salmonella can also infect your own house through the aerosolized fecal dust, so Wakenell suggests using a designated set of clothing and changing into clean clothes before you enter the house. And if you get fecal matter on yourself, wash it off as soon as you can. If you have an indoor chicken wearing diapers, treat the diapers with the same biosecurity you use when cleaning the coop. Discard the diaper where dogs, cats or children can‚Äôt access it. And use a dust mask when cleaning the coop.

Commercial poultry houses vaccinate their birds against Salmonella enteritidis and regularly screen for it by taking swabs in the environment, among other preventive steps. ‚ÄúHowever, there can be random salmonella species‚ÄĒfor example, [Salmonella] braenderup‚ÄĒthat are not passed on from hen to chick [and do not] cause disease in chickens but are present in the environment,‚ÄĚ Sato says.

Every 30 days, commercial hatcheries test everything that can be exposed to salmonella, such as machinery or hatch baskets. This isn‚Äôt necessary for backyard coops. Just remember that salmonella is common around chickens, and always use common sense and clean yourself after handling poultry.

Some states have programs where poultry owners can send a dozen eggs to a laboratory once a year for free to test for salmonella.

‚ÄúLabs check for antibodies, but that doesn‚Äôt mean you have salmonella,‚ÄĚ Wakenell says. ‚ÄúIt means your chickens may have been exposed months ago. Labs can use serum in the blood, but it‚Äôs easier to check using egg fluid. If the hen has been exposed, she will put antibodies into the egg.‚ÄĚ

It‚Äôs best to retest the chicken via a blood test to confirm that it isn‚Äôt a false positive. If it‚Äôs positive again, you need to culture for the salmonella itself‚ÄĒusually with feces. During this time, refrain from selling raw eggs because people can get sick from them.

Coccidiosis is caused by coccidiae, tiny single-cell organisms called protozoans that cause diarrhea in chickens. It‚Äôs difficult, if not impossible, to eradicate because it lives in the environment. If you see diarrhea or bloody diarrhea, the first step is to take a fecal sample to your vet to be checked.

‚ÄúCoccidiosis is animal specific,‚ÄĚ Sato says. ‚ÄúChickens will not swap coccidia with other bird species or animals. For instance, guinea fowl have their own coccidia.‚ÄĚ

The best way to control a coccidiosis outbreak is by prevention. One route is to feed chicks medicated chick starter feed. Sato says the feed includes the medication called amprolium. Chicks are most susceptible to coccidiosis in the first week of life up until about 8 weeks old, so it‚Äôs important to keep using the feed to that age.

A second option is through vaccination. In this case, the chick is given a small, attenuated dose of the actual parasite. ‚ÄúIn the first 10 or so days of life, chicks don‚Äôt have enzymes in them to break apart the parasites, so when the parasites from the vaccine cycle through them, they will go through a challenge and immunize themselves,‚ÄĚ Sato says. ‚ÄúMany organic producers have to use this choice because they can‚Äôt use medicated feed.‚ÄĚ

It‚Äôs important to understand that you can‚Äôt use medicated feed if you apply a vaccination because the medication will kill the introduced parasite.

To treat your older birds, use the same medication that‚Äôs in the starter feed. You need a higher dose for treatment. Amprol liquid for poultry is a good choice. Mix it straight into the water. Figure out how much water your birds drink each day and follow the dispensing instructions. Make sure that the calculated dose is correct because overdosing can be fatal.

Mix it fresh every day for three to five days.¬† There is no egg withdrawal when using this medication.

Avian influenza is probably the second most-known of the poultry diseases, after salmonella. However, the chance of exposure in a backyard flock is slim.

‚ÄúIf you lose half of your flock in 24 hours, that‚Äôs code red,‚ÄĚ Sato says. ‚ÄúIf you‚Äôre losing a bird here and there, it‚Äôs probably not AI. The best thing you can do if you suspect AI is to call the emergency hotline at the state vet‚Äôs office, and they can walk you through what to do.‚ÄĚ

People can get AI; however, it‚Äôs not likely. It‚Äôs more of a disease that can wipe out flocks, which is why testing is good. Testing for AI is required for competitions and fairs. Some states might require AI testing if you transport birds across state lines. The test is either a blood test or a swab of the mouth or throat. Eggs can also be tested.

Pasteurella multocida, also called fowl cholera, best known for causing sniffles in rabbits, can affect humans as well as chickens. ‚Äú[You can catch fowl cholera] by giving your chicken mouth-to-beak resuscitation or kissing a chicken on the beak, because there it will be covered with aerosolized fecal material or snots; or by co-feeding, such as using the same dropper for people and birds without cleaning it,‚ÄĚ Wakenell says. ‚ÄúRodents also carry fowl cholera into the coop, so don‚Äôt let a hen kill mice and eat them.‚ÄĚ

If you see any respiratory infection, promptly call your veterinarian. ‚ÄúThe veterinarian can test for the causative organism(s) and recommend treatment,‚ÄĚ Wakenell says. ‚ÄúFowl cholera can be treated with penicillin, but it will not be effective late in the disease as often the bacteria is walled off by [things such as] dead cells and pus.‚ÄĚ

Marek‚Äôs is a fatal disease that is very distressing for the chicken keeper. It‚Äôs caused by a herpesvirus that brings about paralysis, contraction of the toes and legs that stretch forward or backward. ‚ÄúIt can take six to 12 weeks for a chicken to develop symptoms and die and so it‚Äôs devastating for the backyard owner,‚ÄĚ Sato says.

The solution is to vaccinate the chick as soon as it hatches. The vaccination costs around 20 cents a bird, so it‚Äôs not worth skipping. In some of the bigger producers, the chicks are vaccinated in the egg.

Some breeds are more susceptible to Marek‚Äôs than others. For instance, Sebrights and Barnevelders must be vaccinated, whereas others, such as Marans and Sumatras, never or rarely get Marek‚Äôs. It‚Äôs worth noting that even vaccinated chickens can contract Marek‚Äôs if the vaccine wasn‚Äôt given properly or if the virus overpowers the vaccine, but at least most of your flock will be safe.

You can‚Äôt eliminate the risk of diseases in poultry, just as you can‚Äôt in humans and other animals, but knowing what might strike your coop and taking steps to reduce the chance will help give you peace of mind and allow you to enjoy and appreciate your beautiful chickens and coop.

This story originally appeared in the January/February 2019 issue of Chickens magazine.