Kombucha-making is a fairly simple fermentation process, but sometimes, your brew doesn’t turn out exactly how you planned. 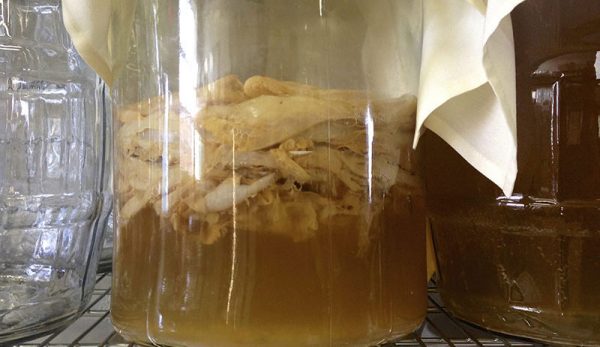 Fermentation is a natural part of life. This chemical process is what brings us yogurt, wine, vinegar, sauerkraut, pickles, tempeh, miso, sourdough bread and so much more. The trick to successful fermentation is harnessing this process to cultivate the beneficial bacteria that promote digestive health while suppressing the pathogens that can ruin your efforts.

Kombucha—fermented sweet tea—is a straightforward ferment to try, yet even with its simple approach, just about every kombucha brewer will run into a roadblock now and then. If you find yourself looking at your brew and wondering “What the …?!”, know that you’re not alone. Let us help you troubleshoot five common kombucha problems.

As kombucha ferments, the symbiotic culture of bacteria and yeast—what you know as the SCOBY, mother, mushroom or starter—digests the sugar and caffeine from the sweet tea. The longer it sits, the more sugar it digests, so the less sweet the taste becomes.

Solution: “Ferment for a shorter time, and make sure to refrigerate after it reaches the desired flavor, unique to your taste buds,” explains Tara Whitsitt, founder of the traveling food-education organization Fermentation on Wheels. “Refrigeration will keep the fermentation dormant. It’s good practice to taste kombucha regularly through the fermentation process.”

It’s also important to remember fermentation speeds up in warmer weather and slows down in cold weather, she continues. If your kombucha is sitting in a warm place, such as on top of the refrigerator, and you find it’s fermenting faster than you’re able to consume it, try moving it to a cooler place, such as in a closet.

Problem 2: My Kombucha Tastes Too Sweet

As explained in Problem 1, the SCOBY will digest sugar as the tea ferments.

Solution: “Let your brew ferment at room temperature longer, until the taste is to your liking,” Whitsitt suggests. You might also move your kombucha to a warmer location in your house to move the process along.

“CO2 [carbon dioxide, the stuff that makes kombucha carbonated] is produced in natural fermentation—the idea is you want to trap that production in your brew vessel,” Whitsitt says.

Solution: “To encourage effervescence, finish fermentation in an air-tight bottle, such as a sling-top, at room temperature,” Whitsitt says. Just be sure to keep on eye on your second ferments and burp them regularly so carbonation doesn’t build up too much and send your kombucha soaring champagne-style across your ceiling and walls.

Problem 4: My Second Ferment Exploded Like Champagne Out Of A Bottle When I Tried To Burp It

Because fermentation occurs in a vessel that’s closed up tight, the carbon-dioxide gas builds up and wants to escape. When the pressure builds up to an extreme amount, the results can be disastrous.

Solution: “Shorten the length of time you ferment in an air-tight container,” Whitsitt says. “I ferment for 24 hours at room temperature.” You might need a longer period of time to get the carbonation you want, but you should check your kombucha’s progress with a daily burping to release the built-up pressure created by the carbon dioxide.

Problem 5: My SCOBY Is Moldy

Mold is a tricky diagnosis because when you look into your kombucha brewing vessel, you’ll see all manner of things floating. There’s the SCOBY, which should take on the shape of the vessel, and there are strands of yeast, which tend to be stringy and brown. Mold on your SCOBY, though, is bad news. Mold distinguishes itself as being dark or fuzzy, Whitsitt says.

Solution: “Throw out your kombucha and SCOBY,” Whitsitt says. There’s no fooling around with mold, which can be dangerous to your health. Even if you remove the mold from the SCOBY, there’s nothing to say that mold isn’t floating somewhere in the tea, so it’s best to not take chances. Clean out and sanitize your brewing vessel, get a new SCOBY, and begin again.

The acidity of kombucha should prevent a fungus from growing, but if part of your SCOBY is not immersed in the tea—as can happen when your brew gets low—mold spores can really enjoy this environment. It’s possible there were bacteria or fungi in your vessel to begin with, which allowed an unwanted colony to reproduce.

Don’t be discouraged by a few bumps in the kombucha-brewing road. When you’re working with live cultures like these, something is bound to go wrong now and then, but this is a process that’s been taking place for thousands of years around the world and still going strong.

About the Author: Freelance writer Lisa Munniksma met Fermentation on Wheels’ Tara Whitsitt at a Get Cultured! Potluck in Louisville, Ky. Lisa blames Tara for the seven fermentation projects going on in her kitchen, and it all started with kombucha. Lisa blogs weekly about ag news and opinion for HobbyFarms.com as The News Hog and every now and then writes about her own adventures farming and traveling around the world at www.freelancefarmerchick.com.