5 Funky Eggs You Can Still Eat

Courtesy .brioso./Flickr Odd eggs are par for the course in the world of backyard chicken-keeping and are usually still fine for the frying pan, as well as a little laugh. On the whole, egg abnormalities should usually not cause any concern. Sometimes, though, bizarre eggs may indicate a deficiency in vitamins or a hereditary anomaly […] 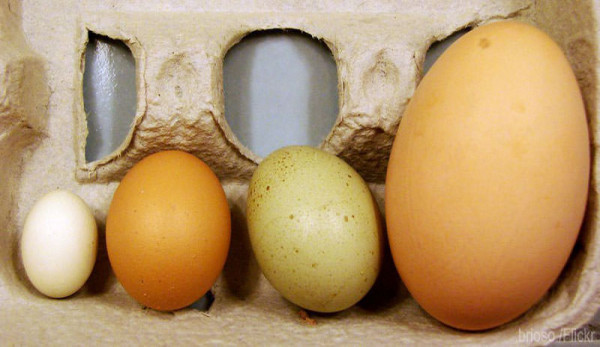 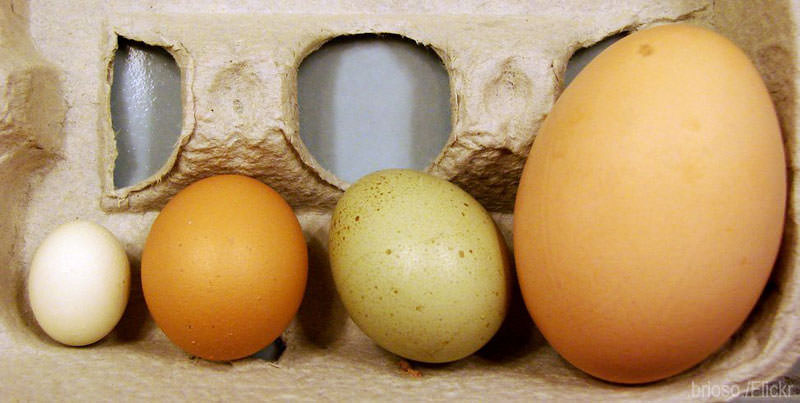 Odd eggs are par for the course in the world of backyard chicken-keeping and are usually still fine for the frying pan, as well as a little laugh. On the whole, egg abnormalities should usually not cause any concern. Sometimes, though, bizarre eggs may indicate a deficiency in vitamins or a hereditary anomaly you need to be aware of, but thereâ€™s no need to be alarmed! If you take a few easy steps, you can help your hens along.

Sometimes called dwarf, wind orâ€”my personal favoriteâ€”fart eggs, an egg without a yolk is usually a young pulletâ€™s first attempt at laying. These oddities are characterized by their small size, round shape and resemblance to grapes or marbles. Not to worry: As a henâ€™s reproductive tract matures, her eggs will become larger and more consistent in the size, color and shape for her breed. For these no-yolkers, the shell may also be thin, so handle with care.

Another antiquated term for these wee orbs is “cock eggs.â€ť Folklore leads us to believe that eggs with no yolks were laid by roosters, and if hatched, would produce a terrifying, serpent-like creature! Naturally, those eggs were destroyed. Luckily, we have a bit more information on the elusive, tiny eggs these days and can enjoy a good laugh instead!

Like tiny, yolkless eggs, soft or shell-less eggs are usually laid early in a pulletâ€™s reproductive maturity and are distinguished by a paper-thin or malleable shell. These eggs may be the result of several stressors, such as water shortages, drastic changes in lighting or even loud noises. Minimize the disturbances in and around the coop when itâ€™s time to lay, as auditory scares (such as a chain saw or leaf blower, for instance) could unduly stress your birds.

If a flock is just starting to lay, these eggs are very common and are nothing to worry about. Soft eggs are to be expected from older hens, too. If your birds have been in production for several years, soft or shell-less eggs may be an indication of a mineral or vitamin deficiency, usually calcium. Be sure to provide oyster shells as a calcium supplement to your henâ€™s daily diet, offered free-choice at all times.Â Laying hens will sense their deficiency and only take what they needâ€”no more, no less.

If you do find a bird that consistently lays soft eggs, despite calcium supplements and general good health, it may be a hereditary trait that is out of your control. Consider culling the bird from the flock, and avoid hatching any chicks from the hen so as not to pass on the trait.

Finally, take care not to break a thin-shelled egg when collecting it from the nest box, and remove it from the coop as soon as possible. Accidental breakage could lead to your birds discovering the tasty yolks and developing egg-eating habits, which, when established, are nearly impossible to breakâ€”no pun intended!

Rough spots, or calcium deposits, can manifest on a shell in a number of ways: coarse bumps, large or bulbous calluses or discoloration. Sometimes, you may find that a hen lays a shell-less egg just before or after an egg with added calcium deposits.

Roughness on an eggshell is usually the result of a calcium or calcium-to-phosphorus imbalance. Without phosphorus, a hen isnâ€™t able to absorb and metabolize the calcium available to her. Hens receive phosphorus by eating bugs with exoskeletons, such as beetles, so allow them to free-range to find their own sources.

Typically, rough spots that occur once in a while from a hen or two are nothing to worry about. Do keep an eye on the flock should the symptoms manifest in many birds at the same time. The flock may be receiving too much or not enough calcium, particularly if the weather has been extraordinarily hot or humid. These conditions can increase a henâ€™s metabolism and reduce the level of calcium available for suitable shells.

As always, provide oyster shells in a separate container in addition to plenty of fresh water, and see if the deposits subside.

However, continued spots or textured shells might be a result of disease, such as Newcastle or infectious bronchitis. If this is the case, the majority of the flock would demonstrate symptoms, and they would occur with frequency. Should your flock show other indications associated with those diseases, consult a veterinarian immediately.

When ovulation happens quickly, sometimes two yolks are released simultaneously and become encased in the same shell. This results in one of the most thrilling breakfast discoveries of all time: a double-yolker!
Usually much larger than your henâ€™s normal eggs, double-yolkers make great eating but arenâ€™t the best for hatching. On rare occasions, two chicks have hatched from one egg, but the conditions arenâ€™t ideal, so you may not want to risk it.

Overall, double-yolkers themselves are nothing to be concerned about. If a particular bird is prone to laying many of these abnormally large eggs, watch her closely for signs of egg binding or internal laying, as some birds have difficulty passing such bulky eggs.

Incredibly rare, double-shelled eggs occur when a completed egg receives a second albumen and shell, usually after reversing direction in the oviduct. This results in a fully formed egg encasing a smaller egg (usually yolkless) or two fully formed eggs nested one inside the other. It is unknown what causes this phenomenon, but the results remain bizarre and shocking!

Far less eccentric (but still not considered top “gradeâ€ť for the grocery store) are misshapen eggs, such as flat or torpedo-shaped eggs. Occasionally, misshapen eggs may be the result of a frightened or stressed bird. Torped-shaped eggs, despite their interesting form (and their tendency to pop up the top of the egg carton), they are normal and tasty.

Blood spots on the shell or meat spots in the yolks and egg whites are also no cause for concern. Blood spots can be washed right off the shell, and meat spots within the egg can happen whether it is fertilized or not, and either way, the egg is still fine to eat.

Itâ€™s easy to be wooed into the illusion that all chicken eggs are bright-white, perfectly formed and the same size and that they magically appear on our grocery store shelves, but nature thrives on imperfection. Flaws are unique and interesting, just like our birds. Enjoy each egg, perfect or not; itâ€™s what makes chicken keeping (and life!) so much fun.Â

About the Author: Freelance writer Kristina Mercedes Urquhart tends to her flock in the mountains of Candler, N.C., where she lives with her husband, dogs, chickens and bees. Follow her adventures in chicken-keeping, homesteading and more on her Tumblr page, The Rocking Horse.