5 Gardening Books I Can’t Live Without

I gave a lecture to our local Master Gardener group a week or so ago, and afterwards a small group of them approached me and asked if I have a favorite gardening book. 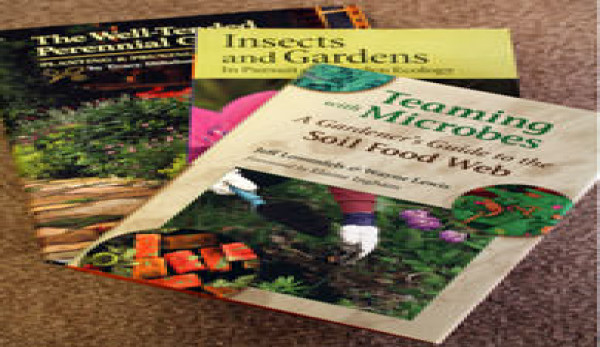 I gave a lecture to our localÂ Master Gardener group a week or so ago, and afterwards a small group of them approached me and asked if I have a favorite gardening book. After staring at them blankly for a few moments in sheer and utter disbelief that they would actually expect me to have just one, I began to rattle on and on about several of my favorites and why it is that I like them so much.

Surprisingly, some of the MGs in the group began to fish around in their handbags, pulling out pen and paper and writing down the titles. Clearly Master Gardeners are my kind of people (which I already knew, of courseâ€”this was just further confirmation). Iâ€™m not sure what they expected me to say, but I got the feeling that they were surprised a bit by some of my answers. Iâ€™m hoping that my list encouraged a few of them to hit the local bookstore sometime in the near future.

Insects and Gardens: In Pursuit of a Garden Ecology
by Eric Grissell; Timber Press, 2001
This bookâ€™s a favorite for its eye-opening look at all the intricate connections between insects, plants and people. Science-based but incredibly fun to read, Grissel hammers home the importance of diversity in our landscapes and the impacts we humans have, both knowingly and unknowingly, on the insects all around us.

Teaming with Microbes: A Gardenerâ€™s Guide to the Soil Food Web
by Jeff Lowenfels and Wayne Lewis; Timber Press, 2010 (revised edition)
Groundbreaking stuff here! Lowenfels and Lewis describe the 9 billion organisms residing in every tablespoon of garden soil and go on to tell us how we can nurture these creatures to the betterment of our gardens. This book is the reason I have gone no-till in my own vegetable garden. Yes, itâ€™s sciency, but itâ€™s also super-funâ€” and often downright humorous.

The Botany of Desire: A Plantâ€™s Eye-View of the World
by Michael Pollan; Random House Trade Paperbacks, 2002
Although itâ€™s not a gardening book per se, it is an incredibly interesting read. Pollan makes a strong case for a plantâ€™s ability to manipulate the human race by highlighting four different species and what a major role they have played in human history. From the potato to the tulip and the apple to the cannabis plant, itâ€™s a fascinating ride through humanâ€”and plantâ€”history.

The Well-Tended Perennial Garden: Planting and Pruning Techniques
by Tracy DiSabato-Aust; Timber Press, 2005
This is, hands down, my favorite practical gardening book. With cultural information on growing and maintaining dozens of different perennials, this book comes off my shelf many times during the growing season. There is no other like it.

Four-Season Harvest: Organic Vegetables From Your Home Garden All Year Long
by Eliot Coleman; Chelsea Green, 1999
So full of terrific information on growing backyard veggies, itâ€™s hard to put down. Coleman speaks from years of experience and is happy to share his lifeâ€™s lessons with humor and wit. Especially useful is his advice on building a cold frame and succession planting. The icing on the cake: Itâ€™s all done organically.