In certain situations, bees need food to help the colony survive. Here are some tips—when, how, what and how much—for feeding honeybees. 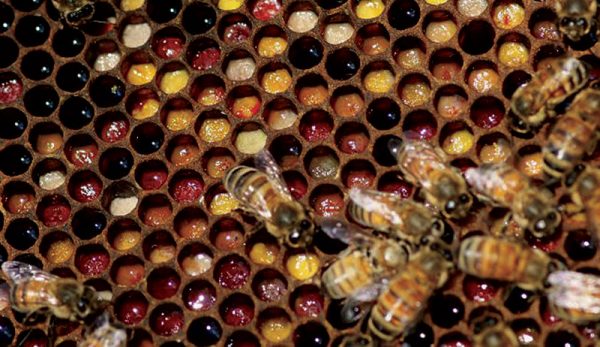 Hobby farmers are accustomed to feeding and caring for animals, but sometimes it’s difficult to think of honeybees as livestock. After all, they’re basically wild creatures we give temporary shelter in exchange for honey and pollination. Yet, research has shown that even before they faced the threats of varroa mites, loss of native forage and widespread pesticide use, unmanaged colonies in the wild suffered losses as great as 50 percent a year. As caretakers, we can do better than that. Making sure that our bees have adequate nutrition at the proper times is one way to improve the odds.

More is not always better. Nectar and pollen provide not only the calories but also the proteins and minerals a colony needs to thrive. With natural sources available, we should avoid artificial substitutes when feeding honeybees.

Early spring feeding—before plentiful floral sources are available—stimulates brood production and helps a colony start building up its population in preparation for the spring nectar flow. Because bees continue to make honey as long as the flow lasts and storage space exists, that means more honey for the beekeeper.

In the Midwest, dry summers often create a dearth, which usually yields to an autumn bloom. This is natural, and feeding honeybees should be done only if no honey is stored in the hive. Goldenrod, asters and other late-year flowers provide the honey that must maintain the colony through the cold months. Some parts of the country escape the summer dearth but might also suffer longer, more severe winters.

Even mild climates experience rainy seasons or periods of low bloom. The quantity of food stores that a hive requires for overwintering depends on region, climate and number of bees. As a general rule, a two-deep hive in a moderate zone should have at least 55 pounds of honey; in northern states, as much as 125. A full deep frame holds about 6 pounds and a full shallow about 2 1/2, or you can get an idea of the weight by hefting one side of the brood box. The important thing is to gauge winter stores and feed if necessary in the fall—if there are insufficient food stores in the hive, and well before cold weather begins.

2. Know What to Feed

Most late fall feeding is done with a thick syrup made with a 1:2 ratio of water to white sugar, which the bees tend to store. In spring and early fall, a 1:1 mixture stimulates brood production. Some beekeeping-supply companies sell high fructose corn syrup formulated for bees, but don’t use the corn syrup sold by grocers or, for that matter, syrup made with brown sugar, molasses or other sweeteners; they can be harmful to bees. Honey, dark from long storage or otherwise deemed unacceptable for human consumption, is always welcomed by bee colonies.

But honeybees don’t live by nectar and honey alone. A number of protein supplements can augment natural pollen sources. You can buy these as patties—placed on the top of the hive—or in a powder, which can be made into patties or sprinkled dry on top of the frames.

Pollen is essential to the development of larvae, and its presence stimulates the bees to produce brood, so pollen substitutes are best in the early spring and early fall. That’s when colonies need to build up their populations to take full advantage of the nectar flow in the one case, and to create a critical mass of long-lived winter bees in the other.

Fondant, or bee candy—easily made at home from recipes available online—is a solid form of sugar designed for emergency winter-feeding. Use it only as a last resort when a colony is at risk of starvation. In that circumstance, it can be a lifesaver.

Beekeeping-supply companies sell a variety of feeders, all with advantages and disadvantages. The entrance feeder is one common type. It consists of an inverted jar on top of a shallow plastic tray, which fits in the entrance of the hive. It’s fairly inexpensive and the most convenient for the beekeeper. It’s easy to see how much syrup is left and easy to refill. Unfortunately, it’s also easily accessible to bees from neighboring hives, which makes it vulnerable to robbing. Foragers from a stronger hive might be attracted by the syrup, approach the entrance to feed, then enter the hive and rob it of all its stores.

Frame feeders are much less susceptible to robbing because they sit within the hive. In fact, they are deep, narrow containers that fit in the space of a brood frame. They can be messy to refill, and of course, you must open the hive to refill them or check their levels. Because these feeders are deep and entered from the top, bees tend to drown in them unless given flotation devices. (Small sticks dropped on top after the syrup goes in will do.) This type is also costs more than other kinds.

Top feeders are convenient, though more expensive, but homemade versions are cheap and easy if the beekeeper has a few extra hive bodies around. Needed materials are a couple of popsicle sticks or twigs placed over the inner cover, an inverted jar with some holes punched in the lid, and a hive body with a cover. You can check and refill top feeders by lifting the cover, and they do not invite robbing unless the boxes are in bad shape. (A little duct tape covers any holes that might serve as a clandestine entry to marauders.)

4. Know What to Avoid

Here are a couple of things not to do:

Never feed with honey supers in place. What you get from your harvest will be sweet, but it won’t be honey.

Don’t keep feeding only because bees keep taking the syrup. They usually quit when the nectar flow is on, but even bees can be lazy. Watch for foragers returning to the hive with full pollen pouches, then pull the feeders.

Never practice open feeding. This is filling an open tub or bucket in or near your apiary with sugar syrup available for all comers. It leads to a feeding frenzy, which leads to robbing, which leads to dead bees and even dead colonies. It can all happen in just a few hours. If extracted honey supers need to be cleaned up before storing, set them out at least several hundred feet from the apiary, not more than hour or so before dark.

Don’t offer pollen substitutes in late fall. Though stimulating brood production in the month before cold weather helps the colony achieve the numbers it needs to survive, doing so during winter is counterproductive. It just increases the demand on finite food stores.

Too many variables exist in knowing when, what and how to feed; doing it by the calendar just doesn’t work. Succeeding at beekeeping requires inspecting hives frequently in order to understand the situation at any given time. That applies not just to feeding honeybees but also to assessing whether a colony is queenright, mite-infested, weak or diseased. Besides, it’s fascinating. Isn’t that partly why we became beekeepers in the first place?

Phil Craft keeps bees in the country near his home in Lexington, Kentucky, and served as the Kentucky Department of Agriculture’s state apiarist from 1999 through 2011. He is also the Ask Phil columnist for Bee Culture magazine. Learn more at www.philcrafthivecraft.com, or ask him a question at phil@philcrafthivecraft.com.