5 Natural Disasters and How to Rescue Your Garden

You can’t prevent a natural disaster, but you can take steps to protect your garden and even rehab it once damage is done. 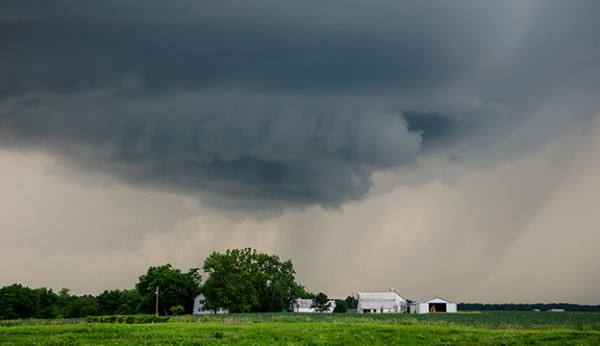 Approximately half the people in the U.S. live within 60 miles of the coast and are vulnerable to storms, floods and other natural disasters, creating untold destruction to lives and property. Vegetable gardens, with their crops of tender annuals, can be particularly susceptible to a storm. Although gardeners cannot prevent all damage, there are measures that any gardener can take to minimize harm.

Hurricane season takes place between June 1 and Nov. 30, though a few have occurred outside this period. Since 1851, about 250 Atlantic storms with wind speeds greater than 74 mph have hit either the Atlantic or Gulf coasts, resulting in inestimable costs in damages. Five storms have reached Category 5, reserved for storms with sustained winds greater than 157 mph.

Vegetables, fruit and nut trees, and fruiting vines are some of the first victims of hurricanes. Wind averaging 100 mph can shred and uproot plants. Accompanying pelting rain can shred leaves and stems. Salt water, whipped up from raging seas and carried up into the storm clouds can linger in the soil and kill plants after the storm has passed. Flooding can cause fruits and vegetables to become contaminated with harmful bacteria, making them unfit for human consumption.

However, modern weather forecasting makes it possible for gardeners to protect and salvage some of the garden. Here are some ways you can protect your garden from hurricane damage:

Flooding can leave behind chemical contamination and disease-causing organisms, which pose the greatest risk to gardeners. It can also cause soil erosion, unwanted silt deposits and damage to plants. Floods bring in waste. Sewage; animal feces; contamination from animal corpses; living organisms, such as E. coli, parasitic worms and inorganic compounds; and heavy metals, such as petroleum products, insecticides and herbicides, can all be carried by flood waters.

Unfortunately, there’s little a gardener can do to save plants when 200-plus mph winds are barreling your way. In fact, in the face of a tornado, the first and foremost thing on your mind should be getting to a storm cellar or some other place of safety.

Whether or not your garden will be missed by a tornado is a matter of pure chance. If it does happen to hit your garden, you can always replant if it’s early enough in the season.

For those who live in tornado-prone areas, minimize the number of pots and other garden items that can become missiles if a tornado strikes, and keep tools securely stored indoors.

Many gardeners use row coverings over their plants, supported by hoops that create a tent. While a row cover will not offer 100-percent protection from hail, it can minimize the damage. Row covers also protect plants from frost and freeze damage and are an organic insect-pest barrier. However, hail is oftentimes a precursor to a tornado. In tornado-prone areas take that into consideration when putting up garden structures of any type.

In the wake of an earthquake, it would seem that vegetable gardens would be the last thing on a person’s mind. Citizens are more concerned about navigating through collapsed infrastructure, health and safety issues, and providing for immediate food and water requirements.

Gardens tend to be neglected after an earthquake, exactly when they should become more important. If there’s a failure in infrastructure and rescue doesn’t arrive soon enough, vegetable gardening might provide the only source for safe and nutritious food. Even after infrastructure has been restored and food supplies become available, fresh produce might still be difficult to come by. A healthy garden, maintained with good organic practices, has the potential to be quite significant after an earthquake.

To ensure that stability of your garden, build raised beds in earthquake-prone areas. Better still, grow part of your garden in containers. Containers can be moved away from overhead dangers, areas in danger of flooding, or nearer to sources of water.  They can also be taken with you in case of evacuation

After any weather event except flooding, apply first-aid to the garden.

Bob Dailey has lived (and gardened) through seven hurricanes, one earthquake, several floods and a tornado.