5 Nervous System Disorders In Chicks (& What You Can Do) 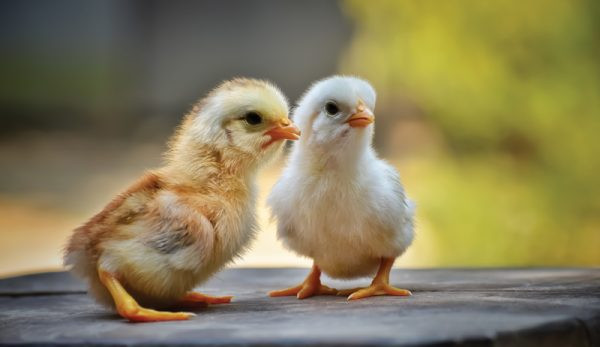 Disorders of the nervous system can cause chicks to act in abnormalŌĆöand often scary-lookingŌĆöways. Typically, you’ll see the head turned or twisted in an odd direction, a condition commonly referred to as ŌĆ£crookneckŌĆØ or ŌĆ£wry neck.ŌĆØ

The technical word for twisted neck is ŌĆ£torticollis,ŌĆØ from the Latin words ŌĆ£torquere,ŌĆØ meaning to twist, and ŌĆ£collum,ŌĆØ meaning neck. When torticollis is not a steady pull, but occurs in painful muscle spasms, the technical term is ŌĆ£opisthotonos,ŌĆØ a Greek word meaning ŌĆ£drawn backward.ŌĆØ

Chicks experiencing nervous systems disorders also may appear uncoordinated, weak, staggery or paralyzed in one or both legs.

If left uncorrected, the neurological disorder may lead to trampling of the unfortunate chick by brooder mates or loss of the ability to eat and drink. The five most common conditions that cause torticollis in chicks are:

Congenital loco is an inherited disorder caused by a recessive gene. It appears in chicks at the time of hatch.

Unless you hatch your own eggs, you are unlikely to see this condition. An affected chickŌĆÖs neck twists backward. This throws the chick off balance and leaves it unable to consume food or water.

Although this condition appears to result from an inability to control the neck muscles, a few studies have indicated it may be caused by a defect in the ear structure. Chicks experiencing congenital loco rarely survive more than a few days.

A mysterious condition also called ŌĆ£congenital locoŌĆØ occurs sporadically over a period of a few days, then disappears as mysteriously as it came.

This condition looks identical to congenital loco. But the fact that it doesnŌĆÖt appear at the time of hatch and isnŌĆÖt lethal indicates it may be a separate and unrelated issue, with an as-yet unknown cause.

Stargazing is a nervous system disorder that will causes a chick to bend the neck so far backward that the head touches its back. The beak will point skywardŌĆöhence the name ŌĆ£stargazing.ŌĆØ

The epileptic-like muscle spasms that pull the head back typically cause the bird to tip over. After a few days of struggling, the chick will die from lack of food and water.

This condition typically appears in chicks less than 1 week old, caused by vitamin B1 (thiamine) deficiency in the diet of the chickŌĆÖs parents. Depending on the severity of the deficiency, the chick may recover if given a vitamin B1 supplement.

Read more: Here’s what you need to do to care for your chickens in cold weather.

Encephalomalacia is a softening of the brain tissue that, if not treated early, results in permanent brain damage. An affected chick may stargaze or pull its head down between its legs, often twisting the head to one side.

This position puts the chick so far out of balance that if it tries to walk it tumbles over.

The primary cause of this disease is a deficiency in vitamin E, giving the disease its other formal name, ŌĆ£hypovitaminosis E.ŌĆØ The vitamin may actually be present in the diet but unavailable for metabolism.

For example, when vitamin E is furnished in the form of polyunsaturated fatsŌĆösuch as cod liver oil, corn oil, soybean oil or wheat germ oilŌĆöthat have become rancid, the vitamin oxidizes and is no longer available for absorption.

A breeder flock ration deficient in vitamin E results in chicks that exhibit crazy chick disease within a week of hatch. If chicks develop this condition because their starter ration lacks sufficient metabolizable vitamin E, signs will appear within two weeks of being fed the deficient diet.

Without treatment, the chickŌĆÖs brain eventually deteriorates to the extent that the chick can no longer function, whereupon it dies.

When started early enough to avoid serious damage to the brain, an effective treatment is to add 1Ōüä2 teaspoon vitamin AD&E powder per gallon of drinking water until signs disappear.

Torticollis is not always caused by disease but may result from a blow to the head or neck. Head injuries that lead to nervous system disorders are common in crested breeds. These tend to have skulls that are less bony than noncrested breeds.

If the crested skull bone doesnŌĆÖt entirely enclose the brainŌĆöbecause of genetics or an injuryŌĆöa blow can cause the brain to swell and press through the skullŌĆÖs gap.

A chick with such a head injury may tuck its head down between its legs and perhaps move backward until the bird backs into the brooder wall or other obstacle. Depending on the extent of the injury, the condition may be temporary or permanent.

When raising chicks of crested breeds, providing a safe brooding environment is essential.

Read more: Learn about 5 dangerous chicken diseases (and how to avoid them).

Unlike other nervous system disorders of chicks, MarekŌĆÖs disease is caused by herpesviruses that replicate in feather follicles, are shed in dander and survive for a year or more in coop dust. Chicks acquite this highly contagious disease (which doesnŌĆÖt affect humans) when chickens inhale contaminated dust or dander from infected birds.

The diseaseŌĆönamed after veterinarian J├│zsef Marek who first described itŌĆöis the most common viral disease of backyard chickens. ItŌĆÖs so common you can safely assume your chickens are infected, even if they donŌĆÖt appear sick.

MarekŌĆÖs disease infects primarily young and growing chickens. But it can also affect aging birds. This complex disease can take on many forms, including a nerve form that results in incoordination, muscle spasms and progressive paralysis of neck, leg or wing.

A transient nerve form that affects chicks 2 to 3 weeks of age appears as temporary limp paralysis of the neck or legs. This leaves birds with a twisted neck upon recovery from paralysis.

Fatality of MarekŌĆÖs disease depends on the virulence of the virus strain, as well as on the presence of any other debilitating conditions.

The first few weeks of a chickŌĆÖs life are the most critical time for infection. Chicks that are isolated from mature chickens until they reach the age of 5 months develop a natural immunity.

Strains of some chicken breeds are genetically more resistant than others. Fayoumis are resistant to MarekŌĆÖs, while Sebrights and Silkies tend to be particularly susceptible, as are some strains of Polish, among other exotic breeds.

No known treatment will cure chickens of MarekŌĆÖs disease. But there is a vaccine. Most hatcheries offer the option of vaccinating chicks. If you hatch your own chicks, you can purchase the MarekŌĆÖs vaccine and administer it yourself.

Because the vaccine does not work in chicks already exposed to MarekŌĆÖs disease, administer it as soon after hatch as possible. Keep vaccinated chicks in isolation while their immunity develops.

Vaccination doesnŌĆÖt prevent the possibility that the chickens may become infected by and spread MarekŌĆÖs disease. But it does prevent the viruses from causing tumors and paralysis. And it reduces shedding of viruses by infected birds.

Seeing any of these nervous system disorders in baby chicks can be a decidedly disturbing experience. By learning to recognize each of these five neurological conditions you will stay equipped to rapidly deal with treatable conditions.

You can also prepare yourself for the inevitable regarding those that are not.

The following four management practices will help you reduce the risks of MarekŌĆÖs disease.

Gail Damerow lives on a farm in Tennessee where she and her husband keep poultry and dairy goats, tend a sizable garden, and maintain a small orchard. Gail has authored more than a dozen books, including StoreyŌĆÖs Guide to Raising Chickens and The Backyard Homestead Guide to Raising Farm Animals. She blogs at gaildamerow.com.