5 Of The Most Fun Farm Animals To Keep

Looking for an animal that brings a big dose of amusement to your farm? Here are a few we recommend. 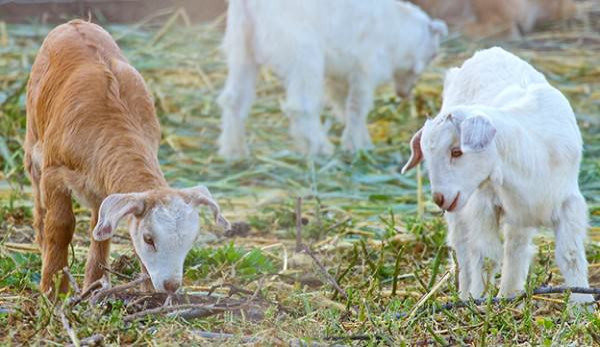 The fun thing about keeping a small farm‚ÄĒparticularly if you aren‚Äôt out to start a farm business‚ÄĒis that you can keep a variety of animals for the mere pleasure of having them around. Although animals can offer your farm sustenance in the form of meat or milk, as well as various services, including guardianship, waste removal and manure, finding farm animals that bring a smile to your face will make their extra care and upkeep worth it.

Here are five animals we‚Äôve had a blast keeping on our farm. If you‚Äôre looking to add a new one to your menagerie, perhaps you‚Äôll consider keeping them, as well.

Well, duh. I‚Äôm a goat farmer, so of course I am going to say goats. But you don‚Äôt have to be a professional to enjoy the ridiculousness of goats of all ages.

From about 3 days old, goats are the clowns of the barnyard. Babies will jump on anything and everything, including other goats, dogs, people, housing, tires, file cabinets‚ÄĒwhatever you purposely or mistakenly leave lying around. As they get older and more sedentary, that behavior is thankfully somewhat curbed, but still, don‚Äôt ever park your car in their space‚ÄĒask how I know.

Goats are incredibly intelligent, yet not particularly inclined to do things to please you. They know their names, but only periodically answer to them. In this respect, they are like big, vastly more social cats. In all other respects, they are like big dogs. Or big toddlers. They thrive on routine, love treats and head scratches, enjoy snuggling with their friends, and want to eat whatever you‚Äôre eating. The very best part of my job is just hanging out with our herd, watching them be goats and giving in to their demands to be pet and loved. Goats rule.

So, this gets a little technical. Female turkeys are fun; male turkeys, particularly after they reach sexual maturity, are absolutely not. And baby turkeys purchased mail order or at a feed store often are not fun either. Let‚Äôs break it down:

Turkeys have a reputation for being dumb, and I shall do nothing to dispel the rumor. Baby turkeys being raised without their mom often need to be taught how to eat. If you have chickens around, they can usually do the job, but I have‚ÄĒmore than once‚ÄĒspent time showing poults how to peck by stabbing bits of feed with a pencil. They‚Äôre just dumb. You can’t leave open water for them to drink, or they could lean forward when they‚Äôre done, fall in and drown. You have to always stay a few steps ahead of their pea brains to avoid them getting into trouble. We have never successfully raised an entire order of poults without some deaths‚ÄĒand that isn‚Äôt fun‚ÄĒbut once they get bigger, they‚Äôre a hoot.

We had a female turkey who successfully raised her own 10-poult hatch, and after they were raised and gone, she remained a loyal pet. She would follow us on chores, ask to be pet, and even let kids pick her up and hold her on tours. She was like a feathered puppy‚ÄĒthe absolute best.

Then we had male turkeys, and inevitably every male turkey we ever owned reached a point where they began to attack us. The best I can tell you about male turkeys is that they‚Äôre made of meat, so after the fun of making them gobble when you make a loud noise or watching them puff up and strut to impress the ladies, you can‚ÄĒwhen the fun and games turn to terror and tears‚ÄĒeat them.

Piglets are among the cutest of all baby animals. I know, I know‚ÄĒall baby animals are cute. But piglets are way up there. And it‚Äôs a good thing because piglets, when picked up by humans, make a sound that is anything but cute. The squealing of an unhappy/scared piglet is almost enough to put a first time owner off, but bear with it. They‚Äôre worth it.

Pigs are absurdly easy to keep. We start ours out in a pen made of hog panels with a dogloo for shelter and move them into moveable pens made of just one or two strands of hot wire when they get bigger. Pigs will eat just about anything. We actually use them to dispose of the whey from our cheese-making business, and routinely grow them out on nothing but whey and pasture for a diet.

Pigs are social by nature, and with patience and regular handling, become so tame they‚Äôll flop over for a good belly rub. How can you not love any animal that asks you for a belly rub? Pigs love to play, and ours really love to race each other around their enclosure. They are just so fun to watch when they get silly.

I love ducks. Baby ducks are a super-messy endeavor, but worth every bit of cleanup and every ounce of stink they make. (Can we measure stink in ounces?) And full grown ducks, depending on the breed you‚Äôve chosen, have so many ways to entertain you. Here are some notes on some of our favorites:

We once had a Pekin named Loretta. Loretta liked to come inside the house and hang out. We played a game that was kind of like fetch but with cat food, which she obviously never brought back. She would come up to me, ask me to toss the food, run to eat it, and then come back to ask again. Silly cute. Pekins are super social.

We‚Äôve had mallards off and on in varying flock sizes. The very best thing about mallards is that they fly just for the fun of it. We call this the ‚Äúair show.‚ÄĚ They‚Äôll often take laps in the sky above the farm before hovering in for a landing, and then acting cool like nothing spectacular just happened.

Muscovy ducks are an entirely different species and unrelated to all the rest of the ducks, which are mallard derivatives. Muscovies are giant and quiet‚ÄĒthey don’t quack!‚ÄĒand they waddle around making funny hissing noises. With their faces covered in red caruncles, they aren‚Äôt exactly pretty, but they‚Äôre pretty amazing looking. Fun fact: They can breed with the other ducks, but the offspring are mules (aka, sterile).

We are new to donkeys, and I‚Äôll admit that I haven‚Äôt quite figured them out. Ours are rescues and not very people-oriented, but they have two habits that I find ridiculously endearing:

One is their love for treats. Even though they don‚Äôt love us yet, they love getting treats. Our girls are super jazzed about Frosted Mini-Wheats, but will take any kind of cookie. They both take them so gently, and I‚Äôm a big fan of their weird, fleshy donkey lips.

The other thing about them that cracks me up about miniature donkeys is that they like to ‚Äútalk‚ÄĚ to emergency vehicles. Donkeys have great hearing, and ours seem to hear sirens before we do. The bray out enthusiastic greetings to first responders of all stripes.

The donkeys are still a bit of a mystery to us, but even as newcomers, they have made my top five list.

If your favorite animal is not listed here, please don‚Äôt send me angry emails. The most fun animals for your farm really are whatever animals you love to share time with. But still and all, if you don‚Äôt have goats, you‚Äôre missing out.

Lisa Seger is one half of Blue Heron Farm, a humane goat dairy in Field Store, Texas. Like all dairy farmers, she has no free time and few actual hobbies. When she‚Äôs not farming or making and selling cheese, she can usually be found rescuing and fostering stray dogs‚ÄĒor posting ridiculous things on social media. Follow her on Instagram: https://www.instagram.com/blueherontexas/