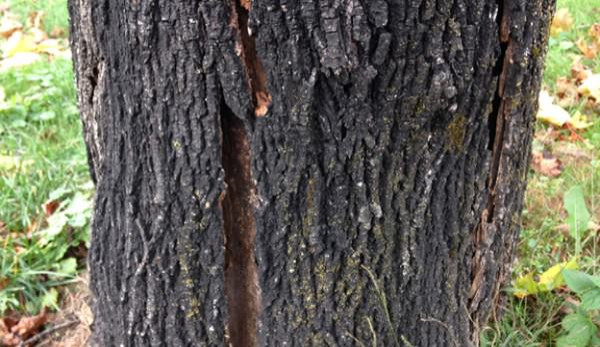 A short drive through suburbia quickly illustrates that we humans make lots of mistakes when it comes to trees. I see trees that are planted and pruned incorrectly every single day. And, sadly, it often takes years of slow decline before the tree eventually dies. By the time we figure out what we did wrong, it’s too late to remedy the situation. Following a few simple tree-care rules when planting and managing trees means we’ll all have healthier, happier trees for generations to come.

The power companies have every right to trim the trees around electrical lines to ensure the safety of our power supply. Trees should never be planted under electrical wires or within 20 to 30 feet of them. Conversely, you should also be sure to consider underground utilities, including septic tanks and gas lines, before planting any trees.

If you follow a tree trunk down to its base, you’ll notice that it flares out just before it meets the soil. When planting new trees, be sure that this root flare is located above the soil surface. Planting a tree too deeply will not result in immediate death, but rather a gradual decline in health, branch dieback, peeling bark, and a slow but certain death.

Never ever pile mulch into a mound up around a tree of any age. Instead, make a donut of mulch around the base, being careful to avoid touching the bark with the mulch. Burying the base of the trunk with mulch is the same as planting it too deeply. It will result in the same slow decline and bring eventual death.

4. Don’t let vines grow up into your trees.

Plants like English ivy, poison ivy and Virginia creeper “grab” onto tree bark with finger-like aerial roots that penetrate down into the bark. As they grow, they exude an acidic compound that weakens the bark, enabling them to keep a grip on the tree. Vining plants, such as wisteria, bittersweet, and grapevines, which climb by twining around the branches, should also never be allowed to grow up trees. The added weight of these vines can readily crack branches or smother trees.

Topping a tree involves hacking off the main leader branches of the tree, leaving only ugly, flat cuts. This pruning technique is detrimental for several reasons. First and foremost, topping opens wounds that are prone to various bacterial and fungal infections. Secondly, removing the leader of certain species of trees encourages the growth of water-sprouts (often called suckers). These are weak, twig-like branches that tend to crack and spit. And because a tree will always want to grow to its genetically determined height, a topped tree will often form a new leader. This new leader grows from a side bud and always has what’s known as a “weak crotch.” The “crotch” is the place where the branch meets the main trunk, and the crotches of secondary leaders have a tendency to split down the center and severely damage the tree.