5 Sheep Books Off The Beaten Path 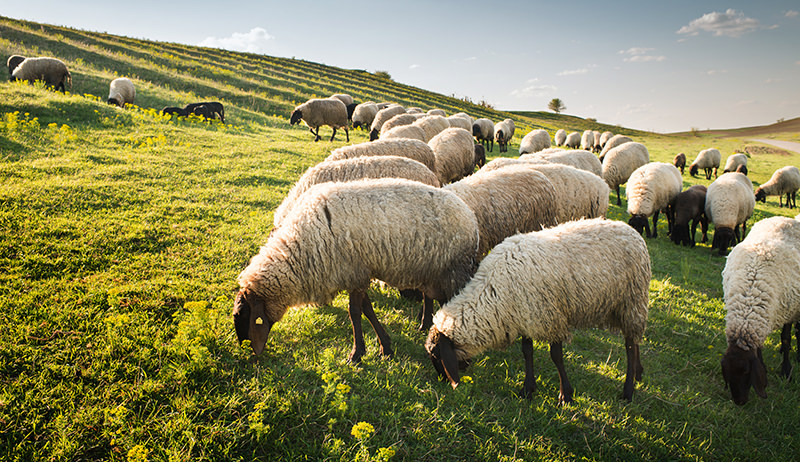 Austin wrote beautifully about the American West in the late 1800s and early 1900s. The Flock is an account of Austin’s time—as a lone woman, no less—spent following Basque and Mexican herders and their flocks through the California Sierra. Even at the dawn of the 20th century, the shepherds are engaged in a losing battle against a growing tourist industry.

Austin’s infuses the brief record of her incredible, enviable journey with romance, and certainly knows how to turn a phrase: “The reward the trail of the wool wagon bears evenly and white. Over it, preceded by the smell of cigarettes, go the shearing crews of swarthy men with good manners and the air of opera pirates.”

The Flock is available in full and for free in many formats, courtesy of the Open Library.

Fortunately for us, someone thought to capture the oral history of Sarah Bixby Smith, born in California in 1871. In her words, she was “born on a sheep ranch in California, the San Justo, near San Juan Bautista, an old mission town of the Spanish padres … and about a hundred miles south of San Francisco.” Bixby Smith’s father was one of a few men who drove approximately 2,400 sheep overland, from the eastern U.S. “to California and brought across plains, mountains, and deserts to this Pacific Coast some of the first American sheep, and thus were instrumental in developing an industry that for many years was of great importance.”

Her story features such anecdotes as a woman chasing off Indians with a hatchet in order to save some Mormon lives, which later results in a welcome from Brigham Young that includes giving the traveling sheep grazing access to gardens.

Bixby Smith’s complete chronicle is available for free via the Library of Congress.

3. Dreaming of Sheep in Navajo Country, by Marsha Weisiger (2011)

The glorious pioneer treks and open grazing described by Austin and Bixby Smith had a dark, disturbing side. In the 1860s—as sheep were being driven west—the U.S. government sought to eradicate the Navajo-Churro sheep that had inhabited the West for centuries. Cattle, goats and sheep were destroyed as part of an effort to subjugate the Navajo people, because livestock enable independence. Later, during the Dust Bowl years, New Deal conservation programs that sought to control rangeland erosion led to the further slaughter of Native American Churro flocks.

The Churro breed evolved from the Churra (Spanish for “common”) sheep brought to the American Southwest by the Spanish during the 1500s. By the mid-1930s, very few “purebred” Navajo-Churros remained. Today, the Navajo-Churro is a rare breed with Threatened status by the Livestock Conservancy, and federal policies of the past are to blame.

Given this history, it is refreshing to read Dreaming of Sheep, a book about all of this and much more from a Native American perspective. Weisiger goes beyond past tragedy to more deeply explore the relationship between the Navajo people, the Churro breed, the brittle desert landscape and fiber culture. She is remarkably fair in her assessment of how little everyone, native people and conservationists alike, understood (and understand) about sheep, managed grazing and soil health.

Unsurprisingly, this small book describes how to shear sheep, but it also unveils the mystery of why we shear in the style and manner that we do—the style Godfrey Bowen himself (or more accurately, his far more introverted brother) invented. It is so much more, though. Bowen is an irreverent, eminently professional, record-breaking New Zealand sheep shearer. He once sheared 559 sheep in a single work day. His voice is short, direct and funny.

One chapter is titled, simply, “Difficult Sheep,” and its contents bring smile of recognition: ‘

“There is the odd tough sheep in the mob, the one that makes the ‘sheepo’ unpopular when a shearer finds it in his pen. It is amusing to hear the remarks of a shearer when he gets a too liberal share of these cobblers.”

As for the shearer’s diet, Bowen recommends “plenty of good greens to keep the blood right” and is clear that “plum duff is not good to shear on.”

Pessoa, a prolific Portuguese poet, was an unusual fellow. Over the course of his literary life, he created at least 72 literary alter egos, a popular technique during the early 20th century. One of these alter egos belonged to Alberto Caeiro, an ostensibly ignorant, uneducated and often unemployed rural resident, and a heteronym of Pessoa. As Pessoa no doubt intended, the voices of those described as ignorant turn out to be anything but. The Keeper of Sheep is not just for sheep lovers and shepherds, but anyone who appreciates nature poetry:

I take myself indoors and shut the window.
They bring the lamp and give me goodnight,
And my contented voice gives them goodnight.
O that my life may always be this:
The day full of sun, or soft with rain,
Or stormy as if the word were coming to an end,
Watched with interest from the window,
The last friendly look given the calm of the trees,
And then, the window shut, the lamp lit,
Not reading anything, nor thinking of anything, not sleeping,
To feel life flowing over me like a stream over its bed,
And out there a great silence like a god asleep.

Recent years have brought popular and successful sheep-centric books like The Yorkshire Shepherdess, Sheepish and The Shepherd’s Life, a New York Times Bestseller. Be sure to add these to your list if you haven’t torn through them already.