5 Things You Need To Know About Africanized Honey Bees

Would you know an Africanized honey bee if you saw one? 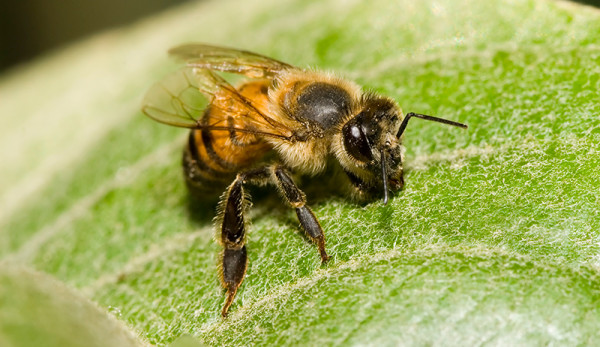 In the 1950s, Brazilian scientist Warwick Kerr traveled to southern Africa to seek out a subspecies of Apis melifera. In an attempt to combine the European honeybee’s temperament and honey-making abilities with the breeding vigor of African honey bees, Kerr produced something akin to a Marvel comic super villain: a strong yet aggressive honeybee hybrid.

In 1957, upon returning to Brazil, Kerr’s assistant accidentally released the hybrid to the wild, where it mated with feral honeybee populations and has been moving northward into the U.S. ever since. To further secure its comic-book creation story, the Africanized honey bee has since been dubbed “The Killer Bee.”

As a North American beekeeper, here’s what you need to know about the Africanized honey bee.

At least to the lay person or naked eye. Unless you’re an expert, or have access to labs to conduct DNA tests on suspected AHBs, you likely won’t be able to tell your own bees from the AHBs. They are rather similar in ways under the surface, too.

Like the EHB, the AHB produces honey and creates and lives in identical colony structures. The AHB doesn’t produce as much honey, as itsÂ genetics doesn’t call for itâ€”the EHB has evolved to adapt to winters, which require storing large amounts of honey for long periods when there aren’tÂ blooming flowers.

In contrast, the AHB produces more comb, more rapidly, and itÂ tends to put more energy towards rearing young. It’sÂ also excellent at pollination. Most importantly, the Africanized honey bee’s stinger is identical in size, and its venom is identical in potency to the European honey bee. The difference is made up in the number of bees that join an attack when it is launchedâ€”they sting in larger numbers.

They’re very strong, very defensive and very aggressive. A disturbance that might send out 10 or 20 European guard bees to provide warnings to a potential intruder, would send out thousands of Africanized guard bees to defend the hive, and they will simply do so with more fervor. What’s more, the AHBs will remain agitated for up to 24 hours. (EHBs usually calm down within a few hours tops, depending on the severity of the disturbance.) It’s likely that these highly aggressive traits are a result of extensive predation by animals, birds and reptiles during their evolution.

This is naturally due to their warm-weather loving genetics, however, it’s a small silver lining for those of us located in the northern North America. Their expansion into our geographic region has been slower than their expansion through the rest of Africa, South America and the southern United States.

There’s evidence thatÂ suggests AHBs are also more resistant to honeybee ailments, such as the foulbroods, nosema and even varroa mites, though this is mostly anecdotal and requires more research. However, it’s possible that AHBs could hold a key to fighting CCD in our domestic honeybee populations. Researchers in Tucson, Arizona, have reason to believe that Africanized honey bees could even be domesticated while retaining the ability to resist collapse.

Remain hands on with your colonies as long as you’re a beekeeper. As my beekeeping mentor says, “Be a beekeeper, not a beehaver.” Monitoring your hives is your best defense agains AHBs commingling with your hive, especially if you live in a state with confirmed AHB populations, such as Texas. Replace queens, mark them, and keep good records. Tune into your colonies’ personalities, watch them for changes, and be mindful when collecting wild swarms in those states.

There’s certainly reason to exercise caution around bees suspected to be Africanized, and it’s certainly prudent to educate yourself about the Africanized honey bee in general. However, as a beekeeper and honeybee advocate, the best thing you can do to help the cause is to not further any alarm that AHBs cause. Educate others with the facts, and, killer though it may be, perhaps even refrain from using its goofy nickname.