5 Trees That Shouldn’t Be Planted Near Livestock

Keep your animals safe from the potential harm of some trees by not planting them in or around your grazing pastures. 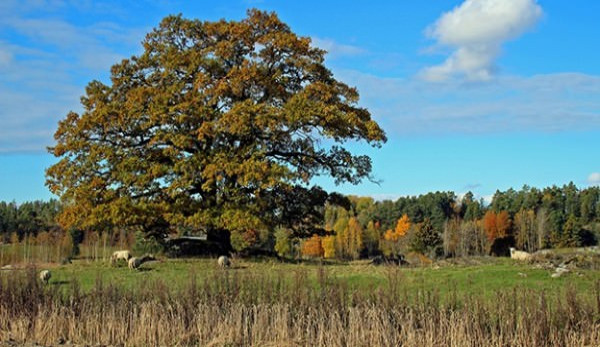 One of the most satisfying aspects of living on a farm is having the ability to plant trees whenever and wherever you want. With lots of open spaces, you can grow a wide variety of native or ornamental trees around your farm without concern about planting them too close to buildings or power lines.

If you have livestock on your farm, such as cows or horses, it‚Äôs a nice idea to plant shade trees¬Ýin their pastures to protect them from the sun. In fact, if you‚Äôre carving your pastures out of a lightly wooded area, there may already be some large and suitable shade trees available. However, it‚Äôs important to keep in mind that while shade trees are good, some tree species can be toxic to livestock and are best planted somewhere else on your farm. Here are five trees you want to avoid planting to keep your livestock safe.

It might come as a bit of a surprise, given that oak is one of the most common, widespread and popular trees, but it‚Äôs actually not the best to have near your livestock. The growing leaves and acorns contain tannin and can be toxic to livestock if eaten in large amounts. That‚Äôs not to say that oak trees can‚Äôt be somewhat near to your animals as long as there is plenty of grass or other food on hand, but if your animals have a tendency to munch on things other than grass, or if there‚Äôs a chance they‚Äôll find acorns appealing in the absence of a better food supply, you might want to take steps to move your livestock or remove the oak tree. In any case, if you‚Äôre looking for a spot to plant an oak tree, choose a location that isn‚Äôt in or right next to your livestock pastures‚Äîit‚Äôs better to be safe than sorry.

The buckeye family, which includes horsechestnut, yellow buckeye and Ohio buckeye, as well as some smaller shrubs that may grow to the size of small trees, is another group that you won‚Äôt want to plant near your livestock. Found primarily in the lower half of the eastern and central United States, Buckeye trees have leaves, nuts and twigs that are poisonous to farm animals. As with oak trees, a buckeye tree or two near your pastures probably won‚Äôt cause a problem, but placing them where your livestock could easily munch on the leaves or branches is not a good idea.

While oak and buckeye trees aren‚Äôt a huge concern when it comes to livestock, much more caution should be taken when dealing with walnut trees. Walnuts, which includes the butternut tree, aka the white walnut, release a substance called juglone¬Ýfrom their roots, which is toxic to many other trees and plants. Juglone is also found in the leaves, branches and nut hulls, and horses standing in wood shavings made from walnut trees can develop laminitis, a serious and sometimes fatal hoof disease. There is also evidence that simply being around walnut trees may be enough to trigger laminitis in some horses.

In addition, walnut husks can also become toxic to livestock in general‚Äînot just horses‚Äîas they deteriorate on the ground, and while some people might find that walnut trees don‚Äôt cause an issue, to be on the safe side it‚Äôs best to keep livestock‚Äîespecially horses‚Äîaway from them.

Cherry trees of one type or another grow throughout much of the country and well into Canada, and while their fruit is generally edible‚Äîand eaten by humans and many animals‚Äîother parts of cherry trees, such as their leaves, branches and the seeds inside the fruit, possess hydrocyanic acid, which can be toxic to livestock and occasionally cause death. As with other trees, having a cherry tree near your pastures might not cause any problems, but because wilted cherry leaves are particularly toxic to livestock, it‚Äôs best to keep cherry trees away in case leaves or broken branches should fall into your pastures.

This is another tree that you should be very, very cautious about. Unlike other maple trees, which pose little threat to livestock, the wilted leaves of red maple are highly toxic to horses and can kill them within a day or so if ingested. The live green leaves of red maple have not been known to cause issues, but the wilted leaves can remain a threat for as much as a month. Avoid planting red maple trees in or near your pastures, and if there are already red maple trees in the area, consider removing them to ensure the safety of your horses.

Of course, this is not a complete list of trees that are toxic to livestock‚Äîother notables include black locust and box elder‚Äîbut fortunately, the majority of trees are safe to plant around livestock, and as long as you do a bit of research before planting, you should be good to go!

HELP!!!!!
If I keep acorns picked up is that ok? We have 2 scottish highland calf steers.

We dont have horses…..under Red Maple Trees ……..it says wilted leaves.
We have some sort of hybrid Maples. Are they bad?