5 Ways I Fight Powdery Mildew in My Garden

A wet summer means my bee balm is infected with the fungus powdery mildew. Here’s what I’m doing to control it and you can try, too. 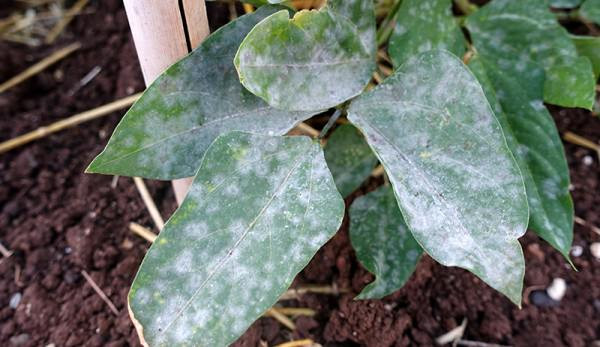 We’ve had an incredibly wet summer this year here in Pennsylvania. That combined with our cooler temperatures has created the perfect recipe for fungal diseases. Although my tomatoes have yet to develop blight (knock on wood!), my bee balm is absolutely smothered in powdery mildew. Sadly, this hardy perennial is notorious for its susceptibility to this fungal issue. And though the mildew isn’t likely to kill my plants, it sure does make them look miserable by covering the leaves with a heavy white dust. Severe infections can limit photosynthesis, and impede growth and yield in vegetable crops.

Powdery mildew is the result of several different species of fungal organisms that live on the leaves of certain plants. Lilacs, phlox, cucumbers, grapes, squash, melons and several other species are prone to attacks. Yes, it’s largely an aesthetic issue, but there are some things that can be done to help keep powdery mildew at bay.

1. Choose Varieties Wisely
In the vegetable garden, be sure to choose varieties of squash, cucumbers and melons with an innate resistance to powdery mildew. Read seed catalogs carefully and look for varieties with a proven resistance to the pathogen. You can also look for a “PM” on the seed packet itself—that’s the code seed sellers use to designate a particular variety as powdery mildew resistant. On these members of the squash family, powdery mildew appears as a white dusting on the leaves that can eventually cause the leaf to turn brown, dry up and drop off.

2. Water Properly
Powdery mildew tends to develop when water rests on the leaf surface, so irrigate near the root zone—not overhead—if possible. Watering during the morning is a good idea, as well. This allows the foliage to dry before nightfall. In years like this one, though, Mother Nature is taking care of the watering and her timing has been less than perfect; it’s been raining a few nights a week almost all summer long.

3. Give Plants Space
Allow plenty of room around susceptible plants to increase the air circulation. I divide my bee balm every four or five years to keep the plant from getting too dense. Be sure to provide plenty of room for vining crops in the vegetable garden, as well.

4. Use Organic Fungicides
Like many other fungal infections, powdery mildew is best managed preventatively because once the organism strikes, it’s difficult to control. If I bother to do anything at all, I use a biofungicide based on the active ingredient Bacillus subtilis. Bacillus subtilis is a bacterium that attacks many fungal organisms, including powdery mildews, rusts, anthracnose, blights, brown rot and several others. It’s applied as a foliar spray and is certified by the Organic Materials Review Institute. Ideally, you should begin to use it early in the season according to label instructions and make regular applications to keep the fungus from taking hold. Although several name brands exist, the one I see most often at my local nursery is Serenade.

5. Remove Diseased Plants
Someday I will dig out all the susceptible bee-balm varieties at my house and replace them with mildew-resistant varieties. Some good options include Marshall’s Delight (a medium pink), Claire Grace (lavender), Prairie Night (purple), Aquarius (pale pink) and Stone’s Throw Pink.

Do more to help combat disease in your garden: