5 Ways I’ll Avoid Another Encounter With a Copperhead

Even when things get busy on the homestead, it's important to keep your head on your shoulders or you might just find yourself face-to-face with a poisonous snake. 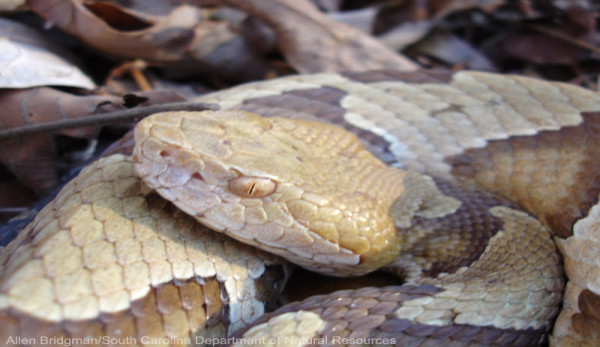 When I worked outside the home full time, I remember the Monday morning flurry of chatter through the office.

“You wonâ€™t believe who I saw!â€ť

Well, I no longer have an office to report to on Monday mornings. Instead I have a computer on a tiny desk, crammed into the corner of a hodge-podge room and next to a mountain of laundry that never seems to get folded and actually put away! Where once was a tizzy of bustling phone lines and fax machines, my milieu now consists of SpongeBob episodes and a washing machine banging against the wall.

“So, Kristy,â€ť you politely ask. “How was your weekend? Anything exciting happen?â€ť

Why yes! Yes it did!

Last week was a particularly busy week for me, and therefore the lionâ€™s share of the animal care fell on the kids. After only spending sporadic moments through the week with the chickens, I went to check on the crew Saturday night as they were going to roost. I realized immediately I was missing a lot of hens! Thinking they had decided to “sitâ€ť in one of their unorthodox spots again, I checked where I could until darkness forced me inside.

Sunday morning,Â my husband woke early and set out looking for the girls with no luck. After hearing the news, I rushed out of the house snatching only a pair of boots. Taking a dog with me, I began to walk the paths through the wooded areas of the property. It took roughly 30 or 45 minutes to circle around the densest part of the property. About 20 yards from the tree line closest to the house, I came across a large pile of feathers roughly 6 feet off the path and partially hidden by briars. Bending down, I realized the pile was actually the first of several piles.

Breaking away from the path, I pushed my way through the briars and thick brush until I came to a small clearing littered with feathers. Suddenly fearing for my own safety, as well as an overwhelming urge to throw up, I called the dog and started pushing my way back out. Getting tangled in a massive thorny vine, reality began setting in that I had just lost most of my flock. It was in that moment that Mother Nature decided to show her full force and authority. Crying, trapped in the brush a mere 20 yards from my front yard, I looked down to see a copperhead directly in front of me, and obviously agitated at my thrashing around!

It is no secret that I have a massive fear of snakes. It is also no secret that in my overactive imagination, all snakes are poisonous and are usually rattle snakes. However, once I was able to locate the head of this perfectly camouflaged serpent, his reddish tones glistened in the tiny rays of sunlight peeking through the tree canopy. And I began to scream. And scream! And yes, scream some more!

I screamed for what seemed like hours, though in reality it was mere minutes. By the time someone heard me inside the house, I was in a full fledge panic/hysterical/sobbing type of scream, which was agitating the snake that much more. Unable to go backwards because of the briars and unable to go forward because of the snakes unwillingness to back down long enough for me to pass, I was stuck in my very own version of hell.

Once my husband arrived with his superman cape and shotgun, it still took several minutes before I was able to get out of the damn woods. Because of my entanglement, he did not want to come from behind the snake and scare him towards me, and the briars on either side made a clear shot nearly impossible, at least when you have a hysterical wife screaming “GET ME OUT OF HERE!â€ť and crying uncontrollably. So, making a wide circle around, he was able to come up behind me, help remove the thorny vines, and step between me and my 2-foot aggressor.

Once all was said and done, I broke into a full meltdown, after which I spent the rest of the day going over the many errors I made along the way that placed me in that situation. While my mistakes were numerous, there are a few things I plan to do better in the future.

1. Maintain Consistency in Daily Chores
While summer brings longer days and hours spent in the dirt weeding and harvesting our beautiful gardens, itâ€™s also the perfect time to become more relaxed in other areas of the homestead. In my case, I failed to provideâ€”and diligently maintainâ€” adequate protection for my flock.

Consistency is key in protection of the homestead. While we will still have losses, being consistent allows us to spot problems early and potentially minimize their effect. Not only would I have probably noticed one or two missing hens, I would have also seen the small chunk of missing feathers on theÂ roosterâ€™s throat.

2. Walk the Woods with a Buddy
I went into woods alone, without telling anyone which direction I was heading or taking any form of communication with me.

3. Take Along Protection
I left the main path on my, completely unarmed, to pursue an unknown predator; again, alone, and without informing anyone of my whereabouts or at minimum a way to call for help if needed.

4. Keep Calm
Failed to keep a level head, and therefore escalated the problem. My thrashing and screaming agitated the snake that, while still poisonous, is typically considered nonaggressive.

5. Learn More About the Farm and Its Inhabitants
I failed to educate myself and my family adequately about our surroundings and its inhabitants. While I was pretty certain my hens were taken during daylight hours, I mistakenly believed fox only hunt at night. And while 2 feet does not seem large for a snake, I mistakenly thought it was merely a juvenile. (Although that thought was not comforting either!) I have since found out through researching copperheads that the type I ran across this weekend only reaches 2 feet or so. I have also found out they range drastically in coloring, where they typically reside, what they eat and their demeanor. All of these things I should have known already, at least in part.

I realize loss is a reality we all face as homesteaders.Â Losing an animal is always hard, and losing your flock is the type of pain that reaches down into your soul and twists your innards. It makes you question your resolve to push forward; to start over. Chickens were my “win.â€ť They were my beginnings down this homesteading path, and I arrogantly placed them in the “successâ€ť category as I pushed on to the next phase.

I am humbled now and heartbroken, but tomorrow morning I will get up and start over with my four remaining hens and the fuzzy chicks they protected, as well as one very edgy rooster! I will still be scared stupid of snakesâ€”all snakes!â€”but I will feel better educated about identification, behavior and treating bites. And I will never again make the mistake of traipsing through brush in search of chicken assassins unarmed, or at least without a cell phone to call someone armed!

Get more of Kristy’s homesteading advice: