Tomatoes seem to be everywhere you look at late-summer farmers markets, but with these tips you can sell more in times of abundance. 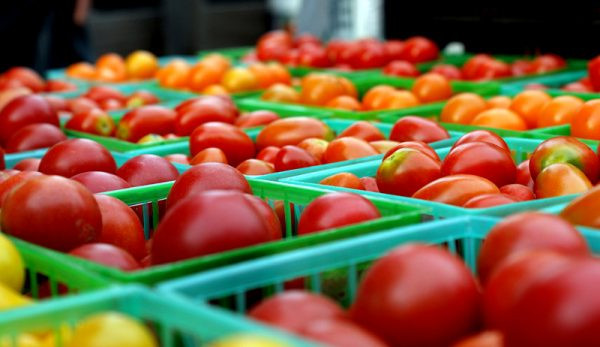 Throughout July and August, farmers markets are jammed with tomatoes of many shapes, sizes and colors. For customers, this is the best time of year. Deals abound, and the fruits are at the peak of their nutrition. But for farmers, this can be among the most frustrating times, as entire market tables can be filled with tomatoes that just aren‚Äôt selling.

With that conundrum in mind, let‚Äôs consider a handful of creative ways‚Äîsome figuratively “outside the box,” some literally inside of one‚Äîto market and sell tomatoes in peak season so you don’t return home with some, or any, of those hard-earned fruits.

Some customers might enjoy having the option of picking out all of their tomatoes and having you weigh them, though there is always a subset of busy shoppers who love to have their products already packaged. One can often find packages of vegetables and fruits in the grocery store, why not the same at market? The size and price is up to you, but whatever you use for packages should be rigid. A berry box or clamshell works, or even a heavier bag. Of course these packages can include more than tomatoes‚Äîthese grab-and-go boxes can also contain a mix of ingredients for a recipe or a prepackaged salad. Some folks might love the option of getting a few cucumbers and lettuce as well. Or maybe a pre-portioned ratatouille that also includes eggplant, garlic, zucchini, peppers and anything you might want to add. You have lots of options here.

Tomatoes are most commonly sold by the pound, but consider the power of selling the fruits individually. It could work this way: Tomatoes are simply paired together by size. So, smaller ones might be $1 each while larger ones go for $1.50. Farmers benefit because they can still get a reasonable price per pound from each tomato, while customers get the advantage of knowing exactly how much money worth of tomatoes they have picked up. Certain customers will definitely appreciate this.

It would take a little forethought, but serious tomato eaters might be interested in the early part of the season in a tomato CSA. In this setup, customers could pay for part or all of their tomato season up front and then pick it up as the season continues. This could even include a certain amount of canning tomatoes. Make sure this CSA-style option is priced to make sense, but also try to land the majority of your tomatoes in the main season so that your tomatoes are already sold when all the other farmers are competing for customers. Also, you should have a lot of experience growing tomatoes before offering this so you don’t let customers down.

Selling your ‚Äúseconds‚Äù in boxes or bags as ‚Äúcanning tomatoes‚Äù is a great way to move the tomatoes on the table that are too ripe, too odd or won‚Äôt generally sell. Add this to your mix of sales techniques to sell even the less desirable tomatoes.

Freshness is a big concern to customers who shop at the supermarket, so seeing tomatoes on the vine has come to represent a sort of nod to how recently those items were harvested. Perhaps placing some on your table still on the vine could be a fun way to sell tomatoes or, at the very least, draw in more customers to your table. Of course, certain varieties work better for this than others‚Äîin particular the determinate tomatoes‚Äîso keep that in mind.