6 Causes of Swollen Abdomen In Chickens

Before heading to the vet, learn what diseases and disorders could cause your chicken's abdomen to bloat. 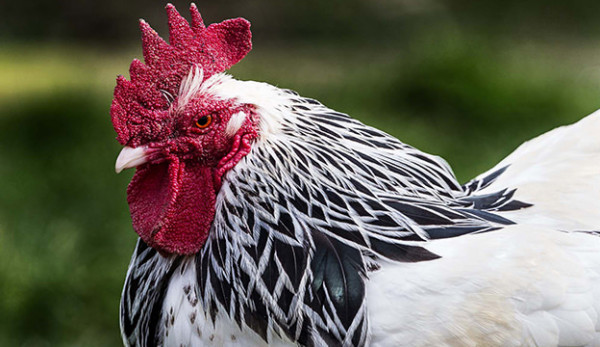 A bloated or swollen abdomen in aÂ chicken could be a symptom of any number of illnesses or health issues, several of which directly or indirectly affect the henâ€™s reproductive system. In veterinary medicine, there is rarely one cause of a condition, so we usually begin with a list of differential diagnoses and use lab tests and physical exams to differentiate. With this in mind, your best course of action is to reach out to your county-extension poultry personnel or veterinarian for help in differentiating the various causes of a swollen abdomen. Veterinarians can perform a physical exam and run diagnostic tests, including X-rays, to distinguish between fluid and solid contents in the abdominal cavity.

Approach the diagnostic process with a clear sense of the animalâ€™s financial value to your operation: Although some services might be available free of charge through a land-grant extension office, the expense of some diagnostic tests and treatments can add up quickly. While itâ€™s always worth your time and money to identify a bacterial or viral infection that could potentially impact more than one member of the flock, this might not be the case with a condition that only affects one hen.

Poultry keepers who keep genetically improved breeds, bred for high egg production, might see these problems more frequently in their flocks, as production breedsâ€”most of which are usually kept for 12 to 18 months in commercial settingsâ€”do not have the genetics to support three to four years of egg-laying. The risk of reproductive disorders increases with age in layers. These afflictions arenâ€™t exclusive to production breeds, howeverâ€”they can show up in any small-scale flock. Although itâ€™s best to have a veterinarian examine your chicken, hereâ€™s a short list of differential diagnoses.

Several diseases, such as Marekâ€™s disease, lymphoid leukosis and various adenocarcinomas, cause tumors and enlargement of a chickenâ€™s internal organs, such as the liver, which might, in turn, distend the abdomen. Tumor diseases tend to be chronic, and affected chickens slowly suffer weight loss and decreased appetite. All day-old chicks should be vaccinated for Marekâ€™s disease at the hatchery. Lymphoid leukosis can be transmitted from hens to developing embryos; therefore, disease-free chicks should be purchased from reputable hatcheries. There is no treatment for tumor diseases.

Extremely obese hens have a thick fat pad that can distend the lower abdomen. Obesity, normally caused by high-energy diets, also predisposes chickens to a condition called fatty liver hemorrhagic syndrome, where the liver is infiltrated with fat and can contribute to abdominal distension. The syndrome causes acute death in chickens when blood vessels in the liver rupture and cause internal bleeding. Itâ€™s seen increasingly in backyard and pet chickens that are fed table scraps high in calories. Itâ€™s also very common with small-scale flocks fed free-choice via feeders. Chickens should be fed a well-formulated and appropriately portioned diet to avoid FLHS.

Normally, only the left ovary and oviduct of the hen are functional, but sometimes, the right oviduct is functional and becomes cystic. The cysts appear in a range of sizes, and overly large cysts can distend the henâ€™s abdomen and compress internal organs. Your veterinarian might be able to drain the cyst nonsurgically using a sterile syringe and needle.

These oviductal disorders are seen in obese hens, older hens or pullets that come into lay too early. The oviduct becomes blocked by an egg or a mass of broken eggs and eventually eggs are pushed back into the body cavity as the hen continues to lay. Affected hens walk like penguins when the eggs in the abdomen are excessive.

There is no technical difference between impaction and “egg-bound;â€ť however, I donâ€™t like using the term egg-bound, as itâ€™s more appropriate for what happens in pet birds, such as parrots, where one fully formed egg is stuck in the oviduct.

In chickens, the obstruction can result from several lodged eggs or a mass of broken shells, shell membranes, or a mass of yolk and egg white, and the result is the same. When impaction occurs in the front part of the oviduct (aka uterus), which is usually the case, eggs enclosed by shell membranes might be found in the abdominal cavity. This indicates that eggs continued to form but were refluxed back into the peritoneal cavity. The prognosis for affected hens is poor. The use of antibiotics might prolong an affected chickenâ€™s life for a few months, but it will eventually die from the condition.

This inflammation of the oviduct occurs frequently and can be introduced through the cloaca by various means, including pecking. The most common infection is by E. coli bacteria. In later stages of the condition, the oviduct and abdomen become distended due to masses of foul-smelling, cheesy contents in the oviduct. The cheesy masses are sometimes mixed with egg contents; as a result, salpingitis can frequently be confused with an impacted oviduct.

A chicken with salpingitis can remain healthy for a long timeâ€”until the late stage when oviductal contents start to impinge on vital organs. The chicken then becomes sick, refuses to eat and slowly declines. Antibiotics seem to help only temporarily, and while some veterinarians might attempt surgery, the chickenâ€™s oviduct is so friable that the procedure is unlikely to be successful. Affected birds will die.

This article was vetted by Dr. Lyle G. McNeal.

This article originally appeared in the May/June 2013 issue of Hobby Farms.