Poison ivy is a nuisance plant that can take over an area of your land—but you can get rid of it without commercially developed herbicide. 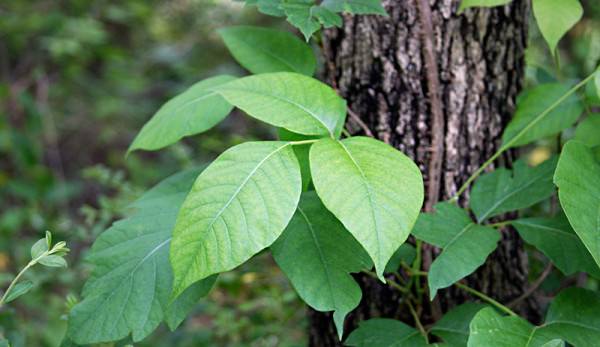 My father recently asked me whether I plan to use the land where he and my mother live for business at some point. My husband and I already keep some bees with them, and because their land is so different than ours—we have wide-open farm land while theirs is thoroughly wooded—we’ve considered using their space for some plants we want to use in our farm products. I knew my dad asked the question from more than passing curiosity. Mom and dad haven’t lived on their land very long, and as dad is working to create green spaces and manage the trees, he has become increasingly frustrated with one particular plant that is fighting back: poison ivy.

Poison ivy (Toxicodendron radicans) has taken over most of the wooded space. (See also: 4 Things You Probably Didn’t Know About Poison Ivy.) He has been sorely tempted to use glyphosate to kill off the plant but knew that if I wanted to use the land, it would be a big problem for me because we grow without such chemicals. He challenged me to find a replacement or he would have to resort to the chemical solution. Of course, he reasons, that he could use it and then make the land available three years from now when organic standards would deem it safe to use again, but I would disagree. Glyphosate damages soil bacteria, and we can’t stop there and not discuss the debated health ramifications.

Why further damage the soil with a chemical when it’s imbalanced enough to allow poison ivy to take over in the first place? Those that choose the chemical route are chasing a symptom rather than solving the problem. In addition, many report that using glyphosate on this particular weed slows it down but doesn’t kill it off completely.

Here are some alternate ways to get poison ivy under control without damaging the soil in the process.

Some folks suggest that pouring boiling water on the plants and the nearby roots will kill off growth. You must be willing to kill everything in the area, though, as this is a pretty non-specific solution. For my purpose, this isn’t practical, as the area in question is rather large. Boiling water may be a good solution for a few isolated plants, though.

Pulling out the vines and root of the plant (suitably covered up while doing so, of course) is one of the time-tested ways of discouraging poison ivy. You have to keep at it, though, and don’t burn the weeds afterwards if you value your lungs or your relationship with your neighbors.

Repeatedly trimming or mowing off the vines at the soil surface will absolutely end your poison ivy problem, but you have to be diligent about keeping it trimmed every time the plant pokes its head above ground.

Any kind of heavy mulch piled thick above a poison ivy plant will kill it off. This is a nice solution to use in combination with mowing or trimming.

5. Enlist the Help of Goats

Seriously, Dad, get a goat already. They’re cute and would provide hours of aggrav— … I mean entertainment. Goats love to eat poison ivy, but you’ll need to be able to fence them or stake them in a specific area for awhile. They aren’t single-minded eaters and will mow up quite a few of your other plants, but if you keep them in the same area long enough they will eat down all the poison ivy.

Here is where my real focus is in fixing just about any weed issue. Why is the poison ivy there in the first place? What is “wrong” with the soil?

Poison ivy appears to like soils that are deficient in calcium, phosphorus and selenium. A good compost tea that includes comfrey, horsetail and even seaweed and is applied on a routine basis could bring the nutrient level up in the soil and create an environment where poison ivy can’t survive.

To take another route, in most cases poison ivy likes an acid soil. Test the soil in the area to be sure and then add lime to counteract the acidity.

I have a few plants here on my property that I’m going to be trying out my soil remediation ideas on. If my dad lets me, I’ll give a few other options a try in larger areas. Perhaps I’ll have something interesting to report before the winter is here.

Do you have any natural options for fighting poison ivy?