The idea of home-raised bacon might seem like a dream come true, but are you up for the reality of raising pigs in the city? 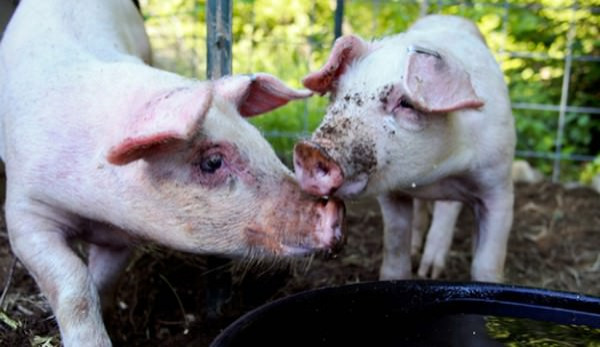 With a growing awareness of food security, as well as a desire to be responsible for our own food choices, people in more populated areas are considering adding pigs to their small homesteads. But keeping pigs isnâ€™t as simple as it seems. Tackling this endeavor somewhere other than in a rural location requires research to understand the legalities, as well as plenty of planning to keep the pigs healthy and out of the neighborâ€™s back porch. Here are a number of points to consider before delving into pig ownership.

While itâ€™s not common, some municipalities are loosening restrictions on keeping pigs. In March 2014, the city of Spokane, Wash., passed a change in their city rules that allows residents to raise pigs under a specific set of conditions,, meaning not every city dweller is immediately eligible. Plus, working with the various city departments isnâ€™t always cut and dry.

“Weâ€™re doing this as an evaluation year,â€ť says Pat Munts, small-farm and acreage coordinator for Washington State University County Extension and the Spokane Conservation District. “Weâ€™re going to do a year of working the bugs out and review it next year.â€ť

Knowing the minimum space and confinement regulations, as well as pig size, are also critical to remain in compliance with city laws. Read the regulations before anything else to see if keeping a pig where you live is even an option.

Spokane allows one pig per 2,000 square feet of lot space, and buildings and fences must be set back a certain distance from property lines. The pigs themselves must weigh less than 150 pounds and shorter than 36 inches at the shorter, limiting urban farmers to small pig breeds. These space and size allotments will vary from city to city. Cleveland, for example, requires a minimum of 24,000 square feet for two animals.

Being properly educated is key to legally keeping a pig in many municipalities. Munts says potential pig owners in Spokane are required to complete animal-keeping certification. The extension office also offers classes on advanced animal keeping, which are highly recommended to minimize potential problems.

“The perception that pigs stink is out there,â€ť Munts says, which undoubtedly can be a big hurdle to overcome when it comes to convincing the neighbors a pig on the block is a good idea.

Lynn Sargent of LNL Mini Farm in Henagar, Ala., says that pigs are actually fastidious about their bathroom habits, usually picking a specific location to do their business. Unlike some animals, they wonâ€™t poop in their feed or water. However, managing their habits in a confined space can be challenging.

While pigs will use the same spot in a box stall or even a litter box, frequent cleaning is the key to reducing the olfactory impact.

“Then you have to find somewhere to put it,â€ť Sargent notes. She and her husband are able to use it in compost for the garden, but this isnâ€™t always possible for smaller homesteads. Be sure you have a preliminary waste-management plan in place before bringing a pig home.

Pigs are excellent when pastured and used in areas where their natural foraging abilities shine as they turn soil and forage on wild foods, but feeding a pig in a populated area can be costly.

“The urban pig person is going to buy feed by the pound instead of by the ton,â€ť Munts explains. “Itâ€™s extremely expensive.â€ť

While pigs will enjoy food scraps, you have to ensure they have a proper, balanced diet to remain healthy.

If pigs arenâ€™t satisfied with their food choices, they will look for other options, making keeping them from roaming the neighborhood a perennial challenge. A few strands of electric or barbed wire fencing arenâ€™t necessarily going to keep a boredâ€”and hungryâ€”pig where you want it to stay.

“They are smart and their whole goal is to find something to eat,â€ť Sargent says. “They will actually dig under fencing. You could use buried fencing. You can also use electric fencing to keep them off of the perimeter.â€ť

Barbed wire is also helpful, but are very strong with a tough hide, so if thereâ€™s something particularly intriguing outside of the wire, they might just push through to get at it. Depending on the particular pig, you might have to build a heavily fortified structure to keep your pig in place.

5. Are You OK With Holes in the Yard?

One of the things many homesteaders love about pigs is their rooting behavior that does a beautiful job of working up soil and preparing areas for future planting, but this tendency can be a problem in small spaces.

“If thereâ€™s not enough on top of the ground to eat, they will go rooting,â€ť Sargent says. And if a pig is in a small space, it will destroy the area in short order.

Itâ€™s also important that pigs have a place to wallow, as they arenâ€™t able to sweat. A mud wallow is ideal, but she says having one of the plastic childrenâ€™s swimming pools works fine for smaller homesteadsâ€”just make sure you have room for one.

6. Can You Face the Reality of Adult Pigs?

Thereâ€™s no question piglets are adorable and their personalities are quick to shine.

“Many times people spoil them when they are little and then are offended by the same ‘cute’ behaviors when they get bigger,â€ť explains Kit Jagoda, of Riverâ€™s Wish Animal Sanctuary in Spokane, Wash. “Then the pig is moved outside and frequently taken to shelters, abandoned or given away. It is difficult to find committed homes for pigs.â€ť

The crew at Riverâ€™s Wish sees firsthand the problem when people bring home a pig, only to realize that keeping it proves too much. They have pigs that have been abandoned, confiscated or found wandering, many with the same story of people who couldnâ€™t take care of them any longer.

Another issue, particularly if the initial intention is to raise a pig for meat, is that pigs have a lot of personality. When you raise one in close quarters for months or longer, when the time comes for butchering, it might not seem like a good idea anymore. Then you either have an expensive pet or you have to find a home for the pig. But even if you decide to bring home a teacup or potbelly pig for a pet, you have to be aware of what you need to do for the long run.

“Having a pig is no different than a dog [with the] commitment to keeping them their entire lives and taking good care of them,â€ť Jagoda says.

While the idea of having a pig on your small homestead, think long and hard before making that leap. Pigs require more substantial housing and are masters of mischief. When in doubt, opt to leave pigs to those with more space.