6 Reasons Why You Should Keep Cochin Chickens

There's a lot to love when it comes to Cochin chickens. The large breed bird is affectionate, hardworking and even (kind of) royal. 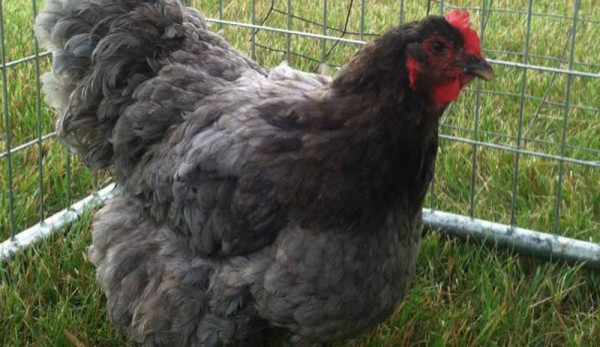 When it comes to eye-catching chickens, very few breeds surpass the magnificence of the Cochin. This majestic bird, originally developed in China for its plentiful meat and its large eggs, almost single-handedly started the “Hen Fever” craze that swept through England in the 1840s.

Who could blame those 19th-century fanciers? So accustomed to scrawny, scruffy chickens, they must have became instantly enamored of this fluffy, full-bodied Asian fowl.

As the bicentennial of this bird’s introduction to England approaches, here are six convincing reasons why 21st-century flock owners should consider keeping Cochin chickens.

Read more: Here are a few important tips to keep in mind when you start keeping chickens.

The Cochin’s multitude of feathers is the initial thing most people notice at first glance. Cross a jumbo feather-duster with a feather boa and you’ll get the picture: Cochin chickens are spectacularly fluffy.

They seem to have layer upon layer of feathers but, in actuality, their plumage is simply long and very densely packed, adding to the breed’s already sizable appearance.

Their characteristic tail is a rounded bouffant bun of ultra-soft feathers. Their slender, sturdy legs are covered in feathers. Even their toes are feathered.

And just when you think a Cochin couldn’t possibly get any poofier, along comes the frizzled variety, whose curled, twisted feathers add even more volume. Do note that if your yard or run tend towards the muddy, this walking puffball isn’t for you, as its feathered feet require a dry, preferably grassy surface.

Very few breeds are as gentle and docile as the Cochin. Their calm, friendly dispositions make them ideally suited for families with children and for older adults, as even the males of the breed are non aggressive.

Cochins are also very easily tamed. My fluffballs learned quickly to assemble whenever I entered their run in the middle of the afternoon. They knew this meant kitchen scraps or other treats, something the other breeds never picked up on until they saw the Cochins happily munching away.

Several of my Cochin girls were also perfectly happy being carried around and cuddled by my sons and, yes, by me on occasion. Although, to be honest, they preferred sitting on my lap in the sunshine.

As you can surmise, the gentle-natured, affectionate Cochin also makes a terrific pet.

Michigan winters arrive early and stay late, with -20ô¤ days being a hallmark of this harsh season. During these bitterly cold months, I’d haul myself out of my nice, warm bed to grumpily open the my coops. But I knew full well that nobody would set one toe outside their pop door.

No one, that is, except the Cochins.

Without fail, they’d troop outside and wander around as if it were a balmy summer day. My husband and I would have to shovel paths through the snow just so the Cochins could stroll. Thanks to their abundant feathering and their efficiency at converting fuel to body heat, Cochin chickens can survive the bleakest of chilly climes.

Not only that: Cochins still lay regularly throughout the winter, earning their keep while the rest of the layers take the snowy season off.

Read more: This guide will help you help your chickens during cold weather.

They’re Approved by the Queen

Cochins aren’t just beautiful, bountiful birds. They’re also royal … or as close to royal as chickens can get.

Cochins were a particular favorite of Queen Victoria, who had a palatial aviary built just for the dazzling birds her explorers brought back from Shanghai. The Queen was known to spend many an afternoon there, enjoying tea amongst her beloved fluffs.

Queen Victoria eagerly distributed her flock’s fertilized eggs to relatives all over Europe. This kicked off the “Hen Fever” for exotic, elegant poultry that took the continentãand eventually Americaãby storm.

If any breed gives the Silkie a run for its money, it’s the Cochin. Mama Cochin chickens will happily brood anything from golf balls to goose eggs. In fact, they are the preferred broody when it comes to hatching ducklings and poults.

Cochins are so inclined towards broodiness that roosters have been known to set eggs.

Cochins will brood more than one clutch per year and will happily mother all manners of baby poultry. Just make sure that your hatching eggs have strong shells. Due to their size, Cochin hens have been known to accidentally crush any thin-shelled eggs they are setting.

They Come in Different Sizes

Cochin chickens are quite formidable in the size department, beaten out in size by only the Jersey Giant and the Brahma. An adult male weighs approximately 11 pounds, while the female averages between 8 and 9 pounds.

Because of their size, Cochins are not known for their flying skills. They can be contained by a two-foot fence, and they usually require a low perch, especially as they get older.

Concerned that these gentle giants might take up all your coop space? Not to worry: Cochins are available as both large fowl and bantam, with adult bantams averaging between 2 and 3 pounds in size.