6 Tips To Prevent A Bee Swarm

Honeybee swarming may be an uncontrollable event, but you can minimize the chances of it happening in your hive. 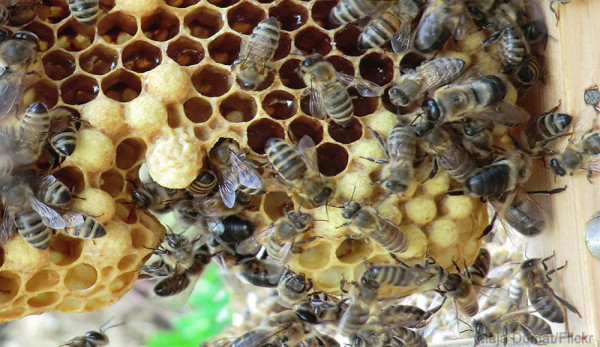 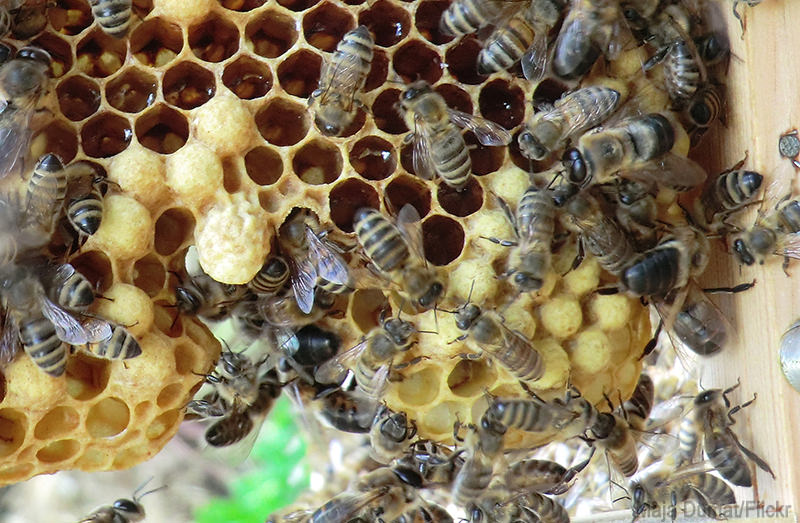 The word “swarmâ€ť tends to conjure images of malicious, buzzing insects blackening the sky with the intent to kill, but this just isnâ€™t the case. In fact, a swarm of honeybees is rather docileâ€”with no brood, honey or home to defend, theyâ€™re quite gentle. Swarming occurs when a honeybee colony feels the urge to expand and propagate: They will make plans to create a new queen, and leave her behind to spearhead the mother colony. Then, about 10,000 bees will fly off with the old queen in search of a new home. A swarm will often settle in a spot within several yards of the mother colony for one to several days while scout bees search for locations for their new home.

For the urban beekeeper, swarming can spell trouble. Most painfully, beekeepers can lose valuable, trustworthy queens in the swarming process. Some colonies will cast successive swarms, significantly reducing the population of the mother hive. Late-season swarms can weaken a colony that is trying to prepare for winter, hurting their chances for survival. Swarming is also an uncontrollable event that you can leave you pretty unpopular with neighbors, should your swarm decide to settle on their property. For all these reasons, here are a few tips to prevent swarming in your hives.

The best way to stay on top of swarming behavior is to nip it in the bud early in the season by knowing what is going on inside each of your hives. You can tell a lot about a hive from the activity at the entrance, but you truly donâ€™t know whatâ€™s going on until you crack open the outer cover. As soon as the nectar season ramps up in your area, start your regular inspections. Once spring is underway and the nectar is flowing, a significant amount of growth can happen in a very short span of timeâ€”think inches of comb built in a single day!

During each inspection, you want to monitor growth. Are the bees bursting at the seams? Has the queen expanded her brood nest as far as it will go? Is there room for the bees to store honey? And most importantly, do you see swarm cells or the beginnings of swarm cells?

Some beekeepers are able to thwart swarming by cutting out swarm cells. For the majority of colonies, however, swarm cells indicate that the hive has already put its plan into motion and they intend to swarm, no matter what you do. In this case, you may have a few daysâ€™ warning and can prepare accordingly. (In this case, you can jump to tip No. 5.)

Beekeepers are amateur botanists. To be an informed, well-rounded beekeeper, you must know what is blooming in your area and when. Bloom times for certain trees or plants can change from one micro-climate to the next. For example, where I live in western North Carolina, blooms in one county may be weeks ahead of blooms in another county because the elevation changes so dramatically between micro-regions. Keeping track of the bloom times and the nectar flow is another clue to when the swarming season will be at its peak and your apiary most at risk.

The urge to swarm is triggered by the feeling of a lack of space. In the spring months, abundant nectar flow and available forage mean that the colonyâ€™s population grows quickly. In just a few short weeks, they may use up all available space in the hive and quickly need more. If they donâ€™t get it, theyâ€™ll swarm. The best way to convince bees that they donâ€™t need to swarm is to give them enough space to grow, thereby telling them that their current housing is adequate and that they can stay put.

Generally speaking for a Langstroth hive, you want to add a new super when 50 percent or more of the frames in the uppermost super are filled with brood, honey or both. Itâ€™s prudent to place a frame of drawn comb in the new super if it is filled with only frames of foundation to encourage the bees to move up into that new super. Bees are highly sensitive to smells and their queenâ€™s pheromones: If they can smell their honey and wax, theyâ€™ll move up and use the space, helping to prevent swarming tendencies.

Sometimes bees have sufficient space, but they donâ€™t know it. Queens tend to lay in an upward trajectory with workers storing honey above the brood nest. Sometimes, a queen will have moved her brood nest up so high in the hive that a bottom super remains completely empty, but the bees believe there is no space left in the hive. In this case, a simple manipulationâ€”moving the empty bottom super up to the top and shifting the rest downâ€”can help stave off the desire to swarm.

Call me superstitious, but I believe in covering all of your bases. Thereâ€™s an old superstition that urges the beekeeper to inform his or her buzzing, winged charges of any big changes in the family: births, deaths, marriages and moves are good examples. Legend has it that bees will abscond the hive, typically through swarming, if one of these events comes to pass and they werenâ€™t informed. Are honeybees sounding a bit high maintenance to you right now? Maybe. But when it comes to preventing a colony from swarming, Iâ€™ll do whatever it takes.

So how does it work? Once a decision is made, but before the actual event takes place, approach your hives quietly and with respect. Gently tap on the side of each hive and tell the bees the great news. (“Weâ€™re getting married!â€ť) Thatâ€™s all it takes.

Like losing hives or getting stung, having a colony swarm is an inevitability of beekeeping. The better prepared you are, the easier the loss will be. If you anticipate swarming season by having extra hive bodies and swarm traps on hand, you can strategically place them around your property or the surrounding area and hope they will be suitable should one of your hives swarm. A few drops of lemongrass essential oil in the swarm trap or on a sheet of muslin or cotton and placed inside the trap will mimic the queenâ€™s pheromones and encourage the swarmâ€™s scout bees to take a closer look at the trap you have available. Hopefully they choose to settle there, and youâ€™ve recaptured your swarm.

As swarming season approaches, donâ€™t forget to inform your neighbors of what they might encounter. Should a colony swarm, your best defense against wary neighbors is a good education: Create a fun and informative (but short) flier that you can hand out or email that highlights some of the important things to know about swarmsâ€”particularly that they are very docile, they are very temporary, and to call you right away. Depending on your town or cityâ€™s terrain, a swarm might not have a safe place to go, so itâ€™s in everyoneâ€™s best interestâ€”yours, your neighborsâ€™ and the beesâ€™â€”that you collect the swarm if at all possible.

Remember, swarming is the way bees propagate: A colony that swarms is actually a healthy colony! Swarming isnâ€™t ideal for the beekeeper, but it is usually a sign of good health and abundant nectar in your area at the time. Take some preventative measures and educate yourself on honeybee swarming behavior, and youâ€™ll have the best chance of keeping your bees at home.

About the Author:Â Kristina Mercedes Urquhart is a freelance writer and photographer living outside of Asheville, N.C. She tends to her hives of Honey bees with her husband and young daughter (a budding beekeeper) in the mountains near Pisgah National Forest. Follow her Facebook community pageÂ The Humble HoneybeeÂ to keep up with the latest pollinator news.Â