Spring is rapidly approaching, which means it’s time to start thinking about pruning fruit trees. Here are six tools you need to tackle the job. 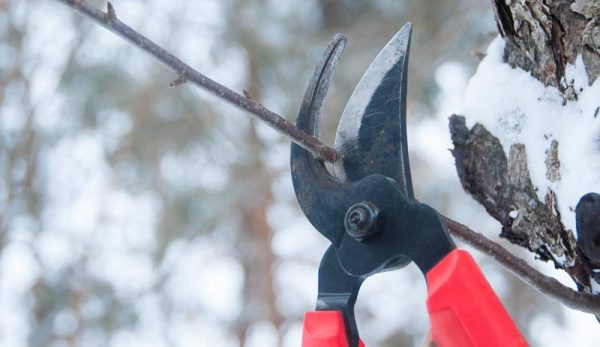 Corrective pruning is best done right away in the spring, before the trees awaken. The goal is to train young trees to grow with an open shape, avoiding tangled branches and weak crotches. Benefits are numerous, from reducing disease to promoting the growth of large fruit easily reachable for picking.

Even older trees can benefit from the occasional pruning.

There are seemingly countless theories on the best way to prune fruit trees for maximum health and productivity. The exact approach you employ depends on many factors, including the types of trees you’re growing. But the tools you need for pruning are the same regardless of how you put them to use.

Here are six tools you may need for pruning fruit trees this spring:

Pruning shears are perfect for trimming thin branches, which will be your primary focus for corrective pruning of young trees. They fit in the palm of one hand, freeing up your other hand to hold the branch you’re pruning steady, or to push other branches out of the way.

If you need to prune thicker branches, pruning loppers can handle the job. Though similar in design to pruning shears, they’re larger (with wider jaws) and require two hands to operate.

Their long handles give you more leverage for cutting through branches up to two inches thick. If you stay on top of corrective pruning each spring, though, hopefully you’ll have dealt with problematic branches before they grow to such a large size!

For removing large limbs (perhaps dead or damaged ones) too thick for pruning loppers to handle, a pruning saw is the tool to use. Like most hand saws, they come in a variety of sizes, with fine teeth for delicate cuts and course teeth for large branches.

But the blades are generally short and curved, and not as tall vertically as the blades of other saws. This allows pruning saws to squeeze into narrow places and still do their job.

Read more: Check out this article to read more about pruning saws.

Sometimes you need to prune branches that are out of reach. Rather than use a ladder (which requires constant repositioning), why not consider telescoping pruning tools?

Similar to apple pickers, pole saws and telescoping pruners are adjustable in length and allow you to reach high above your head for corrective pruning. Just be careful where you let the branches fall!

A corrective pruning cut on a small branch usually heals by itself, but if you’re removing larger branches—perhaps an inch or two thick—you might consider sealing the wound to keep out rot and disease.

Many varieties of wound sealers are available. See if your local nursery has any recommendations.

Read more: Broken branches? Here’s what you can do to repair the injury.

Not all corrective pruning requires cutting branches. Sometimes, you just need to spread branches apart so they won’t grow with narrow crotches prone to breaking.

Limb spreaders can be installed to widen the space between branches. After a couple of years, the branches will have grown accustomed to their new positions, and you can remove the spreaders for reuse elsewhere.