Tips For Improving The Doors In Your Chicken Coop

Chicken-keepers know that coop doors are critical to flock safety. These six tips keep things tight while improving chores for you, too. 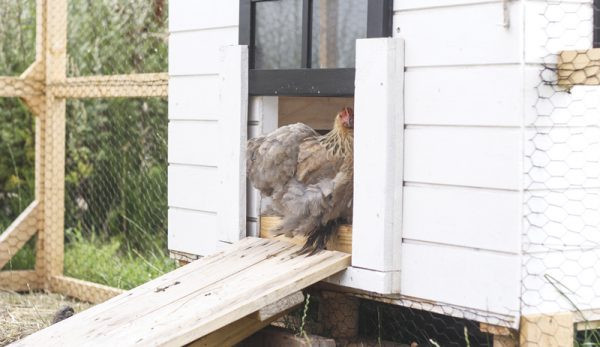 How many doors does your house have? In our little two-bedroom house, I count 16. That includes screen doors and closet doors as well as attic and basement doors. But thatâ€™s not counting the refrigerator door, cupboard doors and even the door to the dryer in the basement.

So it should come as no surprise that even for a small coop and hen habitat, youâ€™ll want at least six doors (and in this case, gates equal doors).

Swing in or Swing Out

For the doors on the coop itâ€™s better that they open out. If they were to open in, they would conflict with the bedding and poop.

Plus, youâ€™d have to leave a gap at the bottom so they could swing in above the floor. That would create drafts and a space for snakes and mice to enter.

The same issues apply to the gate. If the hens have scratched a bunch of debris in front of the gate, it will be difficult to open if it swings in. Installing doors so that they open out also makes it easier to install the hinges.

How many gates have you seen that are sagging? Plenty, right? The remedy to sagging gates is to incorporate a diagonal piece of wood. In construction, triangles are more stable than rectangles.

I have a gate built of cedar branches, and each corner has a short wooden brace thatâ€™s at a 45-degree angle. It forms a triangle at each corner to stiffen the gate and keep it square.

If you go this route, be sure to predrill a hole at each end of the diagonal brace. That allows a screw to slip through easily and then bite into the frame of the gate.

One common feature of coops promised to interfere with our goal of enjoying two-week vacations. Theyâ€™re called pop doors. This is the small door on a coop that allows hens to go out in the morning and back in at dusk.

My wife Chris and I are compatible in many ways. One being we both firmly believe in â€śearly to bed and late to rise.â€ť Neither of us is inclined to get up at daybreak to let the hens out of their coop.

We considered three ways to resolve this quandary and you may want to choose one of these.

A: If youâ€™re confident that the fencing of the hen pen is secure against predators, then you could actually forgo an operating pop door. It is, after all, just a second layer of security if the pen is well made.

B: A chicken-activated door seems ideal to me. Andrew Wells in England appears to have figured it out. Watch his YouTube video and read his comments.

When all of his chickens have climbed on the roost, their combined weight shifts the roosting bar so that cables and pulleys lower the pop door. When they hop off the roost, it shifts again and opens the pop door. And the counter-balancing milk jugs, partly full of soil, look adjustable to allow for changes in chicken population (and weight!).

C: Automatic coop doors are available online. This is the route we chose. There are several designs on the market. Chris was more than happy to pay if it meant we could wake up in a leisurely way while listening to the happy clucking of hens in their pen.

Most of the automatic doors that Iâ€™m aware of depend on a common timer that turns living room lamps on and off while youâ€™re away. Plug the cord into the timer. And plug the timer into the outlet. Youâ€™re all set to go on a road trip. That is unless the power goes out.

If the power goes out overnight, then the chickens will stay sequestered in the coop until you either prop the pop door open, prop open the keeper door or are able to reset the timer when the power returns.

This is the one downfall of some automatic doors. And a good selling point for using a solar panel.

If this happens while you are out of town, it may be tricky to get a neighbor to reset the timer as the process is a bit counter-intuitive. (Consult the instructions!) For our out-of-town trips, we sometimes turn the door off and leave it open, so the chickens can come and go freely.

Because we have a predator-proof pen, we donâ€™t worry about their safety.

I wanted a door into the coop so that I could lean in and do any maintenance. From the keeper access door, I can reach:

It also gives me a position from which I can sweep out or even hose out the floor of the coop. All the spent bedding can flow out through the clean-out doors on the opposite side of the coop and into the compost bins (more about that later).

Clean-out doors are built just the same as the keeper access door, with thick plywood and exterior-grade hinges. The differences are that I recommend a pair of clean-out doors wide enough so that the entire width of the coop can be open for ease of cleaning out.

That way you wonâ€™t have any hard-to-reach corners.

I also recommend a pair of doors so that each door can be aligned with a compost bin. And since a raccoon could stand on the bins, you want to use raccoon-proof latches like swivel safety hasps.

Whoever came up with the idea of putting nest boxes on the outside of the coop should get a medal â€¦ and a pension â€¦ and a monument on the National Mall. Itâ€™s a great time-saver.

However, most nest boxes are accessed through the roof of the nest box. That makes it kind of difficult to clean the boxes. Also some members of the family may not be tall enough to reach that far.

We wondered: Why not let the wall of the nest box open into a tray, as we saw on one coop tour? It gives you someplace to put your carton while you gather eggs. It also makes clean-out easier, and, best of all, shorter members of the family can help with fetching eggs.

For the hatch to form a counterlike surface when itâ€™s open, youâ€™ll need a wooden â€śarmâ€ť that will swing out under it for support. I use scrap 2-by-2 pieces of lumber, but any dimension will do really.

I cut the pieces about 10 inches long with a 45-degree bevel on each end for a more finished look.

Slide the screw through the support arm, and screw it up into the floor of the nest box. It shouldnâ€™t be so tight as to keep the arm from rotating.

When the arm is put away, it should be flush with the hatch when itâ€™s closed. When I want to open the hatch, I just swing the arm out 90 degrees, release the latches and gently swing the hatch down to rest on the support arm.