Display a rainbow of colorful eggs on your kitchen counter or farmers market booth by keeping one of these chicken breeds. 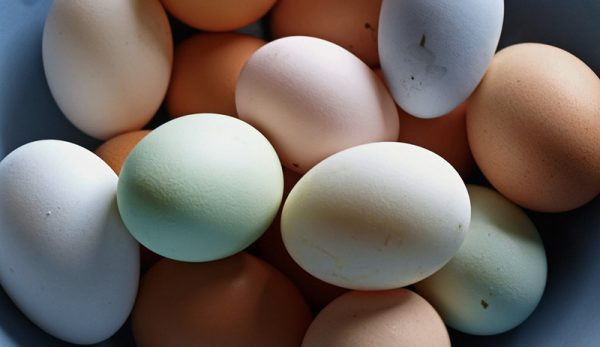 White is not a color when it comes to chicken eggs. But blue is. So are green, rose and oliveŌĆönot to mention eggs that are such a rich brown you expect them to be filled with caramel. Adding layers that produce colored eggs can lend a bit of magic to egg-gathering and bring buyers flocking to your market table.

When choosing chicken breeds to raise, it helps to know that chickens have two basic body types. Type A birds put most of their nutritional intake into egg production. While this makes them prolific egg layers, they tend to be leaner and more nervous than Type B birds. Type B chickens are dual-purpose birds with calm, easygoing temperaments. They lay eggs, but because they convert more of their food into body weight, they produce fewer per week than their Type A counterparts.

If you want to add some wow to your egg selection, here are some breeds that lay colorful eggs to consider.

If a chicken lays blue eggs, it probably has Araucana in its genetics. The breed is reputed to have originated in Chile, though its beginnings are still unclear. Araucanas are rumpless (without a tail head), are often tufted (tufts of feathers hang by fine, elastic skin threads on each side of the head) and lay blue eggs. “A true Araucana is always rumpless,ŌĆØ says Lanae Cash, who breeds, shows and sells Araucanas, at CashŌĆÖs Blue Eggs. “They are not always tufted, but rumpless is a must.ŌĆØ These chickens are body Type B. “The Araucana is a very self-assured bird with a mild temperament,ŌĆØ Cash adds.

Hatcheries might advertise Araucanas for sale, but beware: If the birds have tails, they are not Araucanas. However, they might be Ameraucanas. “Ameraucanas are less rare than Araucanas, and hatcheries do sell true Ameraucanas,ŌĆØ says Traci Torres, co-author of My Pet Chicken Handbook (Rodale, 2014) and founder of MyPetChicken.com. Careful breeding of Araucanas with other breeds produces certain feather patterns. “There is a wild variety of colors, and each will have a different parentage,ŌĆØ Torres says. “Ameraucanas are easygoing birds, and they should all lay blue eggs.ŌĆØ With Araucana genetics, they tend toward body and temperament Type B.

Note the spelling of Ameraucana. If a hatchery sells chicks under the label of Araucana/Americana, Torres says, those birds are what’s known as Easter Eggers. “ThereŌĆÖs no breed standard. An Easter Egger is literally just a mutt, but theyŌĆÖre fabulous birds,ŌĆØ Torres says. Friendly, smart, cold- and heat-hardy, they lay well in the winter, with colorful eggs that range from blue, green, rose or brown to sage, olive or cream. Their eggs also tend to be quite large, Torres says. “Much more a Type B, theyŌĆÖre not a huge bird, but theyŌĆÖre just an all-around wonderful pet, and of course, everyone loves the egg colors.ŌĆØ

Another blue-egg layer is the Cream Legbar, developed in Great Britain by crossing Barred Plymouth Rocks, Golden Leghorns and Araucanas. Leghorn genetics introduce Type A body and temperament traits. “People are all about the Cream Legbar,ŌĆØ Torres says. “TheyŌĆÖre not flighty, but theyŌĆÖre active, and they make fabulous foragers.ŌĆØ

Common brown eggs pale in comparison to the colorful, deep-brown eggs laid by the French breed, Marans. Marans are calm, easygoing birds of medium size and Type B build. According to Debi Stuhr, who breeds and sells Black Copper Marans at Heaven Sent Ranch, “Marans also come in a blue, blue copper, splash, solid black, wheaten and a couple of other colors still being developed.ŌĆØ

According to Torres, “Black Copper Marans are the friendly chickens with the feathered feet that lay the ┬Łreally dark chocolate-brown eggs.ŌĆØ Brown eggs are graded on a scale of zero to nine, zero being white, and nine a deep, dark brown. “You want your Marans egg color to be five to nine,ŌĆØ Stuhr says. “A Marans is not a true Marans unless it lays at least a four or five.ŌĆØ

Lissa Lucas, head writer and ┬Łmarketing communications specialist at MyPetChicken.com and co-author of My Pet Chicken Handbook, lists the Welsummer as her pick for best all-around chicken. With a Type B build, Welsummers are great foragers that lay large chocolate-brown eggs with darker speckles and do well in heat and cold. Lucas considers these friendly, intelligent layers among the sweetest-┬Łtempered birds in her flock.

Penedesencas originated in Spain and are noted for laying some of the darkest brown eggs of any breeds. “Their eggs are beautiful,ŌĆØ Torres says. “A dark, dark, reddish brown.ŌĆØ Being of Type A body build, Penedesencas are alert and wary of their surroundings. “Though they wonŌĆÖt be the first ones to approach you, if you go out every day and give them treats, and you donŌĆÖt move too quickly, they will become more docile,ŌĆØ Torres says. Penedesencas have what is called a “kingŌĆÖs comb,ŌĆØ also called a cresta en clavell or carnation comb, which begins as a single lobe at the front, parting into several lobes in the back.

Nutritional requirements for hens vary depending on whether theyŌĆÖre laying or molting. A protein level around 20 percent works well for laying season, with an average portion of 1/4 pound of feed per bird per dayŌĆöless if they are out foraging in summer and more during cold weather. Because eggshells are predominantly calcium carbonate, hens also should have access to calcium.

“We sometimes get thin eggshells in the summer when birds are foraging a lot and might need a supplement,ŌĆØ Torres says. “Offer free-choice oyster shells. If they need it, theyŌĆÖll take it. If they donŌĆÖt, they wonŌĆÖt.”

When hens lack protein, they can start eating their own eggs, Torres says, adding that this can also be just a bad habit. The behavior can be difficult to stop, so she recommends collecting eggs as soon as theyŌĆÖre laid.

Brown, blue, speckled and shades in between: colorful eggs make a splash at market.

This article first appeared in the March/April 2014 issue of Hobby Farms.

One reply on “7 Chicken Breeds to Raise for Colorful Eggs”

I am very happy to read this. This is the kind of manual that needs to be given and not the accidental misinformation thatŌĆÖs at the other blogs. Appreciate your sharing this greatest doc.