7 Facts You Need To Know About Poultry Lice

Poultry lice are an unfortunate fact of life when you live with chickens. Here's how to spot an infestation, how the lice operate and what you can do. 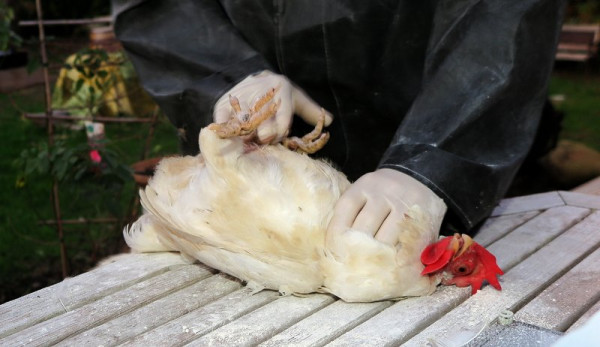 A friend’s son’s unfortunate predicament got me thinking recently about lice. Not human head lice. Many of us know that those repugnant little bugs spread like wildfire throughout children’s heads at school, camp and any other place kids tend to gather. Poultry lice, however, are a different story. How much do you know about this poultry parasite? Read on to learn seven important facts about nobody’s favorite farmyard pest.

1. What Kinds of Poultry Lice are There?

The poultry louse is a wingless, six-legged insect with a squashed appearance: It looks as though it has been flattened by a tiny steamroller. Depending on its species, a louse can range in length between four-hundredths of an inch (the fluff louse) to one-quarter of an inch (the large chicken louse). Most of that length is occupied by the louse’s disproportionately elongated abdomen. Poultry lice range in color from clear yellow to golden straw to dull brown; their nits, or eggs, are laid in white clusters.

3. How Long Do Poultry Lice Live?

Once laid, poultry lice nits hatch in about four to five days. The poultry-lice life cycle is a very short one. The young spend approximately nine to 12 days as nymphs (the immature life stage), molting three times before they become full adults. An adult louse lives approximately 12 days, during which an adult female lays an average of one to two eggs per day. Poultry lice are ectoparasitesâ€”parasites that live on the surface of their host’s body; a louse will usually live its entire life on one host.

4. How Do Poultry Lice Spread?

Just like with human lice, poultry lice spread from bird to bird through close contact. Your hens might not be using each other’s hairbrushes, but if they perch side by side or share a favorite nest box, they’re close enough to allow the lice to transfer from one bird to another. Poultry lice do not hop (human lice don’t, either). They crawl from one host to another, although they usually prefer to remain on one host for the entirety of their brief lives. Poultry lice can also be introduced to your flock via infested chicken crates or egg flats, by the addition of new birds, or by wild birds. To help prevent lice from spreading, never borrow poultry equipment from other farms, use only new egg flats and cartons, and always quarantine new birds for at least three to four weeks.

5. Can I Get Poultry Lice From My Flock?

Poultry lice cannot infest humans; unlike human lice, poultry lice feed on feathers and poultry skin, neither of which we have. Poultry lice will prefer your chickens to you, so you can rest a little more easily. But only a little! Poultry lice will bite you, leaving itchy red marks, so take extra precautions when handling infested birds. Wear gloves, a long-sleeve shirt, boots and trousers when inspecting your flock.

6. How Do Poultry Lice Affect My Flock?

At the very least, you’ll have an uncomfortable chicken who’ll be scratching and pecking at herself, seeking relief. If your girls seem to be preening themselves with more vigor than normal, it’s time to inspect them, especially around their vents, under their wings, on their breasts and down around the base of their feather shafts. Red, patchy areas and chewed-looking shafts are an indication of a lice infestation. Clusters of white eggs are another telltale giveaway. Other signs include feather loss; pale wattles and combs, indicating anemia; a drop in egg production; lack of weight gain in chicks and juveniles; and a fluffed-up, sick appearance.

7. How Do I Treat Poultry Lice?

The simplest way to suppress a lice infestation is to offer your birds a large, deep dust bath containing play sand and food-grade diatomaceous earth, or DE. Use a mixture of approximately six cups of DE to 25 pounds of play sand. The DE will desiccate any poultry lice it touches and help prevent infestations by mites and other ectoparasites. For more severe infestations, use a pyrethrin-based insecticide. Pyrethrin-based insecticides are available as sprays, solutions and dusts. You might need to apply several applications over the course of a month to control the lice infestation. Read the label of any insecticide for guidelines regarding its effect on eggs. Also, wear gloves, long sleeves and trousers to protect your own skin from the insecticide and from any lice that crawl onto you. Do not use shampoos or sprays formulated for use on humans; these have no effect on poultry lice and might be harmful to your birds.

There is no social stigma involved in a poultry-lice infestation. Living with birdsâ€”and bugsâ€”is simply part of co-existing with nature. With these seven facts, however, you’ll be able to better handle any lice that nature throws your flock’s way.