7 Heritage Cattle Breeds to Raise with Your Children

When selecting the perfect cow for your hobby farm, consider these beloved cattle breeds from the days of yore. 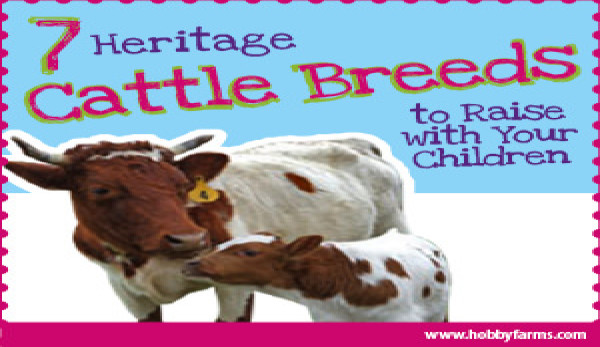 Among the many rewards farm life brings is the opportunity to raise livestockâ€”as a family! Maybe your children are interested in raising animals for 4-H shows, or maybe they have an affinity for a certain livestock species. Thatâ€™s great, and itâ€™s important to foster that interest from the very beginning.

Heritage cattle breeds are one area of husbandry that you and your kids can delve into together. Not only is raising heritage breeds a great way to learn about agriculture history, these versatile animals are often rare and in need of conservation. Plus, they still produce the tasty beef and milk they did in Great-grandpaâ€™s day. With you and your childrenâ€™s help, these breeds can continue to benefit a new generation of farmers.

Dozens of heritage cattle breeds can be found today, but these are seven you and your children might like to try. Take careful note that raising a heritage cattle breed will mean extra responsibility for you and your children due to the breedsâ€™ fragile populations. Learn more from the American Livestock Breeds Conservancy, which works to conserve rare breeds and genetic diversity, before making your decision.

If you live in a climate where most cattle breeds wilt in summerâ€™s heat and humidity, turn to theÂ Florida Cracker andÂ Pineywoods cattle breeds. Descended from cattle brought to the southeastern U.S.Â by Spanish explorers and colonists in the 1500s, they were developed in the hot and steamy longleaf-pines regions of uppermost Florida (Florida Crackers) and Louisiana, Mississippi, Alabama and Georgia (Pineywoods). Both breeds are small, hardy cattle that thrive on rough pasture and brush. They are long-lived, prolific, and remarkably easy keepers. Some breed lines lean toward beef type, others toward dairy type. Dairy-type Florida Cracker and Pineywood cows give roughly 2 gallons of milk per day.

For a cattle breed adapted to cold New England winters, theÂ Randall Lineback is a good choice. In 1912, Samuel Randall and his family took up residence on a farm near Sunderland, Vt., where for the next three-quarters of a century they maintained a closed herd of multipurpose cattle they developed on their farm: the ancestors of todayâ€™s Randall Lineback cattle.

Charles and Robert Colling developedÂ Shorthorn cattle in the Tees River Valley of northeastern England in the late 1700s. Shorthorn cattle, then known as Durhams, came to Maryland and Virginia in 1783. Early Shorthorn registries recorded both dairy and beef-type cattle in their herd books, but in 1948, dairy breeders formed their own breed association. Today, Milking Shorthorns and (beef) Shorthorns are two separate heritage cattle breeds.

Another worthy household dairy cow, theÂ Milking Devon was already an old breed in 1623 when Edward Winslow brought three red heifers and a bull from Devonshire, England, to Plymouth Colony in Massachusetts. The breed was established in New England during the 1600s, where it was cherished for its beauty, hardiness and ability to thrive in rugged conditions, as well as for the strength and speed of its oxen. Milking Devon cows produce 4,200 to 8,500 pounds of 3.5- to 4.5-percent-butterfat milk in a 305-day lactation.

Dexter cattle are small, dual-purpose cattle that also excel as both oxen and pets. Bulls weigh 800 to 1,000 pounds and measure just 38 to 44 inches at the withers; cows average 750 pounds and measure 36 to 42 inches tall. They originated in Ireland and came to America at the beginning of the 20th century, when wealthy Americans like James J. Hill and August A. Busch stocked their country estates with the eye-catching Dexter cattle.

TheÂ Highland is an ancient cattle breed developed in the rugged, mountainous areas of Scotland.

Highland cattle produce beef thatâ€™s lean, well-marbled and delicious with little outside fat. (The Highlandâ€™s long outer coat acts as insulation, so it doesnâ€™t need a thick layer of fat to stay warm.) Highlands are docile, extremely cold-hardy, disease-resistant, adaptable and long-lived. Cows give birth with ease, and in general, the breed is incredibly easy to keep. As an added bonus, their cute factor is above reproach.