7 Science Facts About The Chicken Egg

An egg is an amazing marvel of science, full of chemicals, architecture, nutrition and more. Eggs also taste great (but you already knew that!). 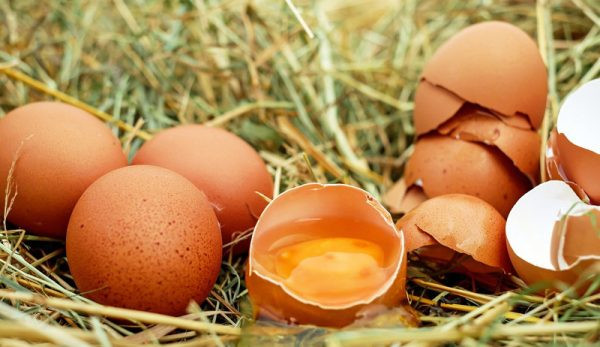 Eggs ŌĆ” they seem so commonplace. Millions of them in the aisles of countless grocery stores, baked into cakes and quiches, served fried with toast or boiled into devilish delights. LetŌĆÖs not forget the abundance produced by backyard chicken-keepers and hobby farmers.

With such an ordinary food around us all the time, itŌĆÖs easy to forget that an egg is actually a most amazing and remarkable object! To help you better appreciate these little marvels of the nest box, weŌĆÖve collected seven egg science facts that you might not be familiar with.

Think about the egg science behind eggshells for a second. What exactly is that outer material made of, anyway? ItŌĆÖs a stiff material that seems rather unlike any other aspect of a living creature.

But wait, you might think. ArenŌĆÖt eggshells similar to bones?

Not exactlyŌĆöeggshells are made of 95 percent calcium carbonate, CaCO3. And while your bones certainly utilize calcium for strength, it isnŌĆÖt the same chemical compound. Bones also contain a greater mixture of organic materials.

Instead, calcium carbonate is the same material found in seashells, coral, chalk, limestone and marble deposits. Calcium carbonate is also an active ingredient in antacids, which has led some enterprising homesteaders to attempt grinding chicken eggshells into a powder for use as home remedies or calcium supplements.

(This is best attempted only with proper research. The eggshells must be disinfected properly and ground into a very fine powder.)

Gardeners also apply crushed eggshells to the surface of the soil as an insect, slug or even cat repellent!

Keep in mind, though, it takes a long time for eggshells to break down and become part of the soil.

At first glance, it might seem that a chicken egg is a closed system. After all, the shell appears solid and there are no visible holes or entrances for anything to pass through.

But if the shell were truly a closed system, it would have to contain all of the oxygen that the growing chick requires for energy and a storage area for the carbon dioxide wasteŌĆöa byproduct of metabolism.

Eggs are compact and efficient. Egg science tells us they donŌĆÖt waste space by attempting to store the vast amount of gases a living chick requires. So whatŌĆÖs the answer?

Eggshells arenŌĆÖt completely solid and contain as many as 7,000 to 17,000 tiny holesŌĆö1Ōüä1000 of an inch acrossŌĆöwhich allow for the input and output of oxygen, carbon dioxide and moisture.

This is critical for a chick’s health and development. Gases are exchanged from the embryo to the shell via the allantois (a fetal membrane) and a network of blood vessels. You can see this egg science in action by candling one.

A small amount of oxygen is stored inside the egg, in the air sac, or cell, which increases in size during the chickŌĆÖs development. Prior to hatching, the chick breaks through the air sac to obtain its first ŌĆ£realŌĆØ breath of air.

That boost of oxygen enables the job of pecking free! (The air sac exists in a minimized form even in unfertilized eggs. It’s the ŌĆ£flatŌĆØ area at the wide end of a hard-boiled egg.)

At first, it might seem that the pores would provide a means for bacteria to invade. But the shellŌĆÖs cuticle, or bloomŌĆöa final coating that goes over the eggshellŌĆöprovides a protective seal.

For nonfertilized eggs bound for the supermarket in the U.S., eggs are washed after collecting. But this washing removes the cuticleŌĆöa major reason eggs in U.S. stores must be refrigerated.

Some other countries choose to opt out of the egg bath, the cuticle is left intact and refrigeration is not necessarily required.

Eggs intended to hatch chicks should never be washed. The chick needs the protection of the cuticle.

Learn how you can incubate a clutch of eggs.

How about this: What’s the science behind an egg’s egg shape?

When we think of birdŌĆÖs eggs, weŌĆÖre pretty used to thinking of the classic chicken egg shape. But thatŌĆÖs only one of many possible egg designs.

Some birds lay rather spherical, round eggs, while other eggs are oval. And still others are longer and more elongated.

Besides providing us with wonderful diversity to marvel at, these different egg shapes might just serve a couple of useful purposes. Perfectly spherical eggs would seem to be the strongest. But oval-shaped eggs contain exceedingly strong arch shapes that hold up well to even pressureŌĆösuch as a hen incubating them.

Architects have long prized arches for their strength. Eggs put them to use as well.

One benefit of an oval egg is that it generally wonŌĆÖt roll away in a straight line. The oval causes the egg to roll in a circle, back toward where it came from.

ItŌĆÖs been proposed that this shape is beneficial to cliff-dwelling birds. If an egg rolls out the nest, it will have a better chance of surviving than a perfectly round egg that may just keep rolling and rolling right off the cliff to certain doom.

A clutch of egg-shaped eggs also fit together more compactly in the nest.

A recent study focused on the relationship between bird varieties and their egg shapes suggested that the more athletic the bird, the more elongated its eggs.

Whether a combination of these reasons or others science has yet to discover, an egg has one of the most unique shapes in nature.

4. The Color of the Yolk

Have you ever noticed that some chicken egg yolks are a brighter yellow, while others pale in comparison?

This isnŌĆÖt just a random occurrence. Yolk color is directly related to the henŌĆÖs diet. And the color of the egg yolk has almost no effect on the nutritional value of the yolk.

CarotenesŌĆöwhich give carrots their orange colorŌĆöaffect the color of egg yolks. And chickens that consume a diet heavier in carotenes will produce eggs with a zippier, darker orange yolk.

Green plants such as alfalfa, or diets including yellow corn, will likely cause chickens to produce eggs with a yolk that is a more typical yellow color. On the other hand, hens on a diet of blander-colored foodstuffsŌĆöwheat, barley or white cornmeal, for exampleŌĆömay tend to produce eggs with very pale yolks.

Spice up your chickens’ diet by growing a yard they’ll love to eat!

5. The Power of the Yolk

While on the topic of yolks, itŌĆÖs worth noting that a chicken eggŌĆÖs yolk is an absolute storehouse of nutrients. This makes perfect sense, as the intended purpose of the yolk is to feed the developing chick embryo.

But egg yolks are excellent for human health as well, despite the eggŌĆÖs reputation for being high in cholesterol.

The white and yolk are close in terms of protein. But the yolk is where we find much of the eggŌĆÖs omega-3 fatty acids, vitamins B6 and B12, folic acid and all of the A, D, E and K vitamins.

The yolk supplies a fleet of minerals such as copper, iron, manganese, zinc and more.

YouŌĆÖll also find the yolk to be a fine source of choline. This is beneficial to human heart and liver health, and very important during pregnancy for the brain development of the baby.

If you toss the yolk, youŌĆÖre missing out!

6. The Color of the Shell

Today, some egg buyers seem to perceive just the opposite. Many see brown eggs as more desirable, perhaps thinking that brown eggs are somehow more organic or nutritious.

In reality, you’ll find almost zero nutritional or health difference between brown or white eggs, and no taste difference either (assuming the hens receive similar diets).

The one difference you will find today is that brown eggs are actually more expensive than white eggs, Little House notwithstanding.

The price difference is a direct consequence of chicken farming logistics. Chicken breeds that produce brown eggs are generally a bit more expensive to raise, and this extra cost is passed on to the consumer via higher prices for brown eggs.

But whatŌĆÖs the mechanism that defines whether an egg is white or brown?

It comes down to chicken genetics. Different breeds produce different pigments during the egg formation process that result in eggshells of different colors.

Play It By Ear

One clue can come from the chickenŌĆÖs earlobes.

While there are exceptions to the rule, breeds with red earlobesŌĆösuch as Brahmas, Plymouth Rocks or Rhode Island RedsŌĆöproduce brown eggs.

The coloring itself comes from various pigments released by the hen: protoporphyrin for brown eggs and oocyanin for blue and green.

Oocyanin is applied earlier in the egg-formation process and penetrates the eggshells, causing the interiors of blue and green eggshells to be colored.

Protoporphyrin, on the other hand, is applied later in the egg-formation process and only coats the outer surface of the shell. Hence, brown eggshells are white inside!

White eggs have no pigment applied. They stay the natural color of calcium carbonate: white.

An egg might not seem that amazing when you see hundreds of cartons lined up in the grocery store, or when your flock hens lay dozens for you each day. But every eggŌĆöwhether destined to grow a chick or be scrambled on the stoveŌĆöis a small scientific miracle indeed.

When hard-boiling eggs, you might occasionally notice that the yolk (or a ring around it) turns pale green when the egg is hard-boiled. Rest assured, the green egg is perfectly OK to eat and you wonŌĆÖt notice a difference in taste.

But why the green color? And why doesnŌĆÖt it happen every time? The answer lies in a fun little piece of egg science and perhaps a small flaw in your cooking.

We hate to tell you this, but youŌĆÖre actually partially responsible for that green yolk. You let the eggs get too hot.

When heated for too long, the iron in the yolk begins to chemically interact with hydrogen sulfide that is contained in the cooked egg whites. This interaction causes the green color.

(By the way, the hydrogen and sulfide in the egg are separate until cooked. ItŌĆÖs their combination that gives hard-boiled eggs that ŌĆ£eggyŌĆØ smell).

One solution to defeating the green yolks? Cook your eggs for the proper time then put them in cold water as soon as theyŌĆÖre done to prevent them from continuing to hold heat after theyŌĆÖre removed from the stove.

This article originally appeared in the May/June 2020 issue of Chickens magazine.