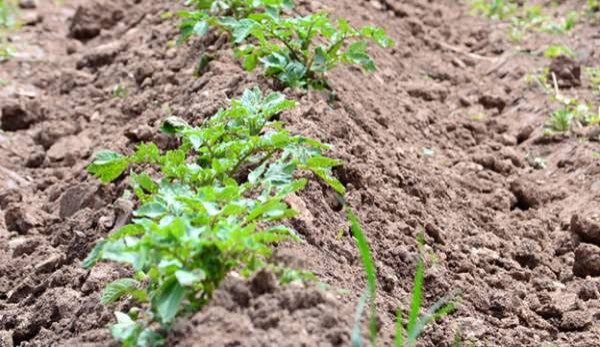 Soil is teeming with microorganisms of all kinds. In fact, there are 100 million to 1 billion bacteria alone per teaspoon of soilâ€”that doesn’t count all of the algae, fungi and protozoa.

Some microorganisms work hard to benefit your crops by fixing nitrogen, degrading organic compounds and making soil nutrients more available to plant roots, while other microorganisms are pathogens that bring fungal infections, viruses and diseases to your crops. You can’t look at a handful of your soil and tell what microorganisms are present, but you can put soil-health practices in place to boost the good and reduce the bad.

Soil organic matterâ€”aka humusâ€”plays a major role in your garden soil, says Julia Gaskin, sustainable agriculture coordinator for the University of Georgia Department of Crop and Soil Sciences. It affects the biology, chemistry and physical qualities, such as soil structure, moisture-holding capacity and nutrient availability.

The amount of organic matter ideal for your farmâ€™s soil varies based on climate and physical soil qualities. For example, clay soil builds organic matter easily, but sandy soil doesn’t hold on to organic matter as easily. While it’s not easy to build up too much organic matter, an excess can tie up phosphorus, creating nutrient problems in your plants. Gaskin suggests checking with yourÂ local NRCS office for recommended soil organic matter content of native soils.

ManyÂ beginning farmers use the philosophy that if a little is good, more is better, so they dump a lot ofÂ compost on the soil to bring up organic matter levels quickly, only to find the humus doesn’t correlate to the amount of time and money spent on compost application.

“Think about building soil health over a space of three to five years,â€ť Gaskin continues. “Be patient with your soil.â€ť Good soil organic matter boosters are the application of compost and manures, the use ofÂ cover crops and the reduction of tillage. (More about all of these later.)

2. Use the Right Amendments

Not just any soil amendment will help you build diverse soil biologyâ€”you must use the right ones. The first place to start is getting aÂ soil test to learn everything you need to know about your soil, especially pH and deficient nutrients.

Achieve the right soil pH to get the most out of your fertilizer. Gaskin calls the pH neutral range of 6 to 7 the “sweet spot.â€ť With pH in place, use the fertilizer recommendations from the soil test to select your amendments, includingÂ compost and manure.

“Be strategic about building up the fertility,â€ť Gaskin says.

Cover crops are sometimes called green manure for their ability to fertilize soil naturally. They also protect soil from erosion and suffocate weeds. Gaskin says planting cover crops is one of the most important things you can do for your soil.

“Don’t leave the soil out there bare for extended periods of time,â€ť she says. You could useÂ mulch as a cover, but she emphasizes that it’s best to have something living in your garden. The cover crops give soil microorganisms nutrients, boost soil structure and provide pores for water to move through.

Brassica-familyÂ cover crops, such as mustard, rapeseed or radishes, when incorporated into the soil, release chemicals that inhibit pathogens or enhance soil microflora to compete with pathogens, according to the University of California. By providing a food source for the good bacteria, the bad microorganism populations get knocked down. Other cover-crop plant families have their own positive attributes, too. Legumes, such as alfalfa, winter peas and clover, fix nitrogen in the soil for use by the next crops to be planted in that place.

4. Tidy Up the Garden

If your crops experienced a disease, virus or fungus, remove the damaged materials right away. Leaving them in place will boost the population of those bad microorganisms in that area. Likewise, incorporate spent plants into the soil or remove them as soon as possible so they donâ€™t develop diseases and cause a problem for future crops in that area.

If a soil-borne pathogen’s favorite crop family is put in the same part of the garden year after year, that pathogen’s population is going to thrive there. Continuously planting the same crops in the same ground will also deplete that soil of certain nutrientsâ€”whichever those crops are most hungry forâ€”and will reduce soil health in that manner, as well.

Especially if you have experienced a soil-borne pathogen in your crops, don’t till. One school of thought is that by bringing the bad microorganisms to the surface, you are exposing them to the elements to die; however, youâ€™re actually doing the pathogens a favor by spreading them to a larger area of your garden and by contaminating your equipment.

Gaskin doesn’t approve of too much tillage. “Every time you stir up the soil like that, you’re losing SOM,â€ť she says. “Think about using the least-aggressive cultivation method.â€ť

Fungi love wet, heavy soils, so fungal pathogens thrive in soggy environments. Improving water movement through your soil will benefit the good microorganisms by allowing proper access to oxygen and also reduce soil-compaction problems, improve crop roots’ ability to penetrate the soil, increase availability of oxygen to roots and make it easier for you to get to work in the field after a rain event.

Drainage can be improved by installing tile drains, in dire circumstances. More likely, heavy soil would benefit from the incorporation of more organic matter and planting in raised beds.

You will never get rid of all pathogens in your soil because microbial populations are always changing. Unfortunately, there is no “magic bulletâ€ť to achieving healthy soil, as Gaskin points out, but a strong stand of microorganisms gives your soil the best chance to be healthy, in turn creating crops that are healthy.

To dig deeper into soil health, check out the Sustainable Agricultural Research and Education publication “Building Soils for Better Crops: Sustainable Soil Management,â€ť available to purchase in print or free to download online.