7 Tips To Plan For Pollinators

Planting a garden that fosters native pollinators will create a circular relationship that benefits plants and insects alike. 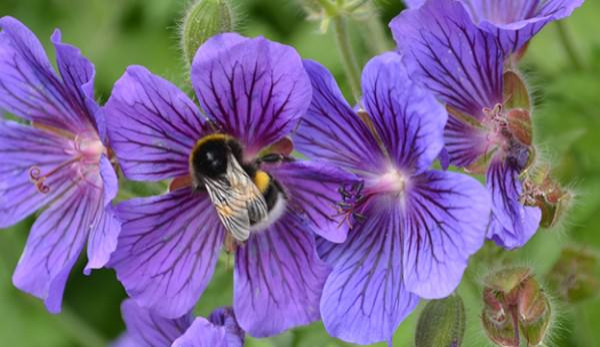 Pollinator decline is one of the most pressing global environmental issues facing our food system. Itâ€™s common to hear about honeybees (Apis mellifera) and issues like colony collapse disorder, but the decline of pollinators in generalâ€”including 20,000 other species of bee and creatures like beetles, wasps, butterflies, bats, moths and even monkeysâ€”doesnâ€™t make the headlines despite the fact itâ€™s been happening at least since the beginning of the 20th century.

Many non-honeybee pollinators provide better (or different) types of pollination, and have obligate mutual relationships with native flowers. Some bees, like the Orchard Mason bee (Osmia lignaria) in North America, fly at lower temperatures than honeybees, and are thus superior pollinators for early-blooming plants; they need dried reeds or tubes to nest in. The 250-plus species of bumblebee (Bombus spp.) do something called “buzz pollination,â€ť which gives a better fruit set on everything from tomatoes to blueberries; they often nest in old rodent burrows, tree hollows or undisturbed grasslands.

I do something that I like to call “edible forest gardening:” My yard has been converted into a multilayer ecosystem of fruiting trees, shrubs and ground cover. Planning for native pollinators allows me to maximize the potential harvest from the fruiting species. Iâ€™ve picked up a few tips and tricks along the way to encourage these creatures to move in to my cultivation space.

I make “bee gardensâ€ť throughout the space I work in, which contain diverse clusters of high-nectar blossoms. These gardens are around 20 square feet and are densely planted with herbaceous perennials: I go for flowers with spires or compound blossoms, like lupins, foxglove, giant alliums and astilbe to maximize the use of vertical space.

Pollinators need corridors that are filled with sustenance. Ecological studies have shown that even planting flowers along roadways creates de facto migratory corridors for pollinators like butterflies, which can no longer cross pesticide-filled agricultural fields. If youâ€™re gardening for pollinators, try to create continuous borders of flowering plants to make as unfragmented a habitat as possible.

3. Plant Native Species (And Let The Weeds Be!)

There are several species of butterfly that live in my local biome whose larvae preferentially eat stinging nettles. As much as I am loathe to leave nettles around, keeping little patches where the local plants can flourish also sustains the pollinator population; the same goes for plants like dandelions and clover: These are nectar-rich blossoms, and in the case of clover, also perfectly shaped to be forage for long-tongued bumblebees.

In lieu of landscaping, my neighbor has planted a field of native wildflowers. This is not only beautiful but also constantly alive with all manner of insect life.

4. Plant For The Whole Season

After three years of tweaking them, all of my bee gardens bloom over the entire growing season: I try to design these gardens so that there is always something flowering, so that the local pollinators are never left wanting. In the garden above, for example, I made a seed mix of some of my favorite self-sowing annuals and biennials, and broadcasted them over the area. The result is a random, dense meadow-like arrangement, which provides visual appeal and cut flowers over the whole season.

We private gardeners canâ€™t control what people are going to spray out in the rest of the world, but we can make our own gardens into a safe space for all manner of life. Sometimes this “lifeâ€ť concept includes fungi, mildew and other organisms in the “pestâ€ť category. If I am working against pests that absolutely need to go, I opt for the simplest possible solution: vinegar for mildew and fungi, boiling water for ants, and smoke for wasps: This keeps the environment safe for all those insects and fungi I do want to move in.

Mycologist Paul Stamets recently did a talk in which he explained how bees up-regulate their immune systems by sipping nutritious droplets from fungal mycelium, which are like the roots of fungi. Rotting wood has an important place in the ecosystem as a rich habitat for insects, fungi, gastropods, arachnids and an array of decomposers. Further, it decomposes into rich organic matter that will enrich your soil with the nutrients the tree took up in its lifetime and help it retain water and structure.

The concept behind an insect hotel is simple biomimicry: Researching your local pollinators and how they nest can give you the information you need to make them a safe place to have their young in your own garden. Many bees and beetles nest or overwinter in hollow plant structures, so a densely packed frame of these organic materials can become a residence for a number of those creatures that will benefit your garden and biome.

Of course, the first thing any gardener should do is get to know their local pollinators! Get a book, call your local parks service or horticultural extension, or just spend some time observing. Biologist Jennifer Owen once discovered over 500 species of wasp in her own backyard: You donâ€™t know what is out there until you take a closer look.