Emergency responders tend to animals in the path of wildfires on the West Coast. 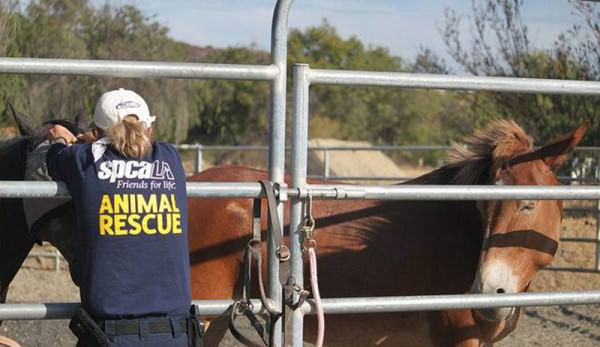 The Sand Fire, which has burned 37,473 acres in the Santa Clarita Valley, is among the worst fires that California has ever seen, according to firefighters in the area, and more and more lives are increasingly becoming affected. Through the efforts of Society for the Prevention of Cruelty to Animals Los Angeles (spcaLA) and the Hansen Dam Equestrian Center, more than 700 horses, goats, chickens and other farm animals have been evacuated from Sand Canyon to safer pastures.

“Animal rescue is one piece of a very sophisticated puzzle in a disaster,” says spcaLA president Madeline Bernstein in a press release. The organization works alongside and communicates with other first responders and emergency personnel to share critical information in getting both humans and animals to safety.

The spcaLA has deployed their Disaster Animal Response Team to help keep the animals safe, and it’s likely that they’ll be working in the coming days to relocate many more due to difficulty of area responders to get the Sand FireÂ contained.

If your farm is in an area at risk of wildfire, it’s important that you have a disaster kit on your farm ready and that all individuals involved with the farm know how to employ. For more information on keeping your animals safe during a natural disaster, check out these HobbyFarms.com articles: