Modify your favorite recipes to be cooked in cast iron, and you’ll produce warmer, crispier and, yes, even healthier results. 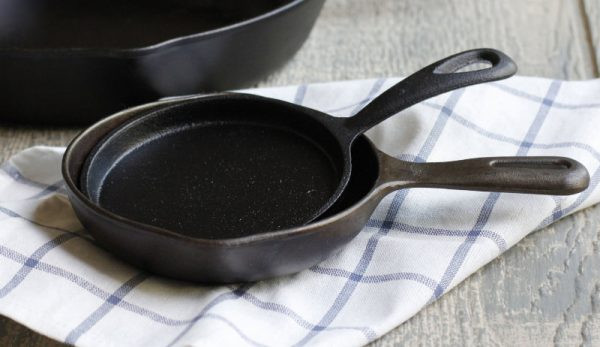 We all cherish our cast iron pieces, but do you reserve them for only a few specific recipes? Foods taste better in cast iron, and those skillets, Dutch ovens and muffin pans can be used for more recipes than you might expect.

Cast iron pots and pans are not only versatile in the kitchen, they absorb and hold heat well, making them ideal for dishes you would like to keep warm long after they hit the table. Cooking with cast iron also offers some unique health benefits. The more seasoned your pan, the more non-stick it becomes, which allows you to use less oil and other fats when cooking. Research shows that cast iron can even boost the iron content of food, which can be helpful for those with iron deficiencies. Foods with longer cooking times, those that are stirred often and acidic foods like tomato sauce are better at leaching out more iron from the pan.

It’s time to break out of your cast iron rut and give those pots and pans new uses in everyday cooking. Bake your next casserole in a cast iron skillet and use those muffin tins for a fun on-the-go breakfast. From savory to sweet, here are a few ideas to get you started.

Cast iron muffin pans are a helpful tool for making single-serving versions of your favorite breakfast recipes, such as quiches. Wipe the inside of each cup with cooking oil or butter. Add a few tablespoons of chopped vegetables, cheese or meat, and fill the cup with a blended mixture of eggs with a splash of cream or milk, leaving about a 1/4-inch rim at the top of the cup. Keep in mind that smaller portions will bake more quickly, so watch closely. The egg cups will likely be ready in half the time of your standard quiche or casserole.

A cast iron skillet is a helpful tool for baking and serving party dips. Spinach-artichoke dips and black-bean dips stay warm in cast iron, making them ideal for a snack table where guests will be munching for an extended period. If your recipe calls for a glass casserole dish, baking in cast iron may take a little less time due to how well it holds heat. Begin checking it at least 5 to 10 minutes before the recommended baking time is up.

Some mac-and-cheese recipes are cooked until creamy on the stovetop, while others are baked in the oven with a crunchy topping. Cast iron works well for both varieties. As you make the roux in the cast iron and scrape up the delicious bits along the bottom of the pan, it’s likely your cheese sauce will be a little darker than normal. When baking the mac and cheese, keep in mind that cast iron may require less cooking time, so watch it closely to prevent the bottom from burning and the mac and cheese from drying out.

Spinach, Brussels sprouts and corn all cook well on the stovetop when sautéed in a cast iron skillet. The addition of heavy cream and roasted garlic, horseradish or ground nutmeg creates a new side dish for a special occasion. As the cream simmers and bubbles in the cast iron, it gains even more rich and delicious flavor. When cooking on the stovetop with cast iron, you may find that you need to reduce the burner more than usual to maintain a simmer when compared to using other varieties of skillets and pans.

A cast iron Dutch oven is ideal for your favorite holiday stuffing. Sauté the garlic, onion, celery and spices as usual on the stovetop. Add the bread crumbs and stock directly to the pot to mix the stuffing. Cast iron holds heat well, so you may need to reduce the baking temperature by about 25 degrees F, or you can experiment with baking the stuffing for less time to prevent it from drying out in the oven.

You don’t have to restrict your cast iron baking to cornbread. Other quick breads like zucchini, lemon poppy seed and banana bake well in a cast iron skillet. The shape of the skillet adds an element of fun, allowing you to cut the bread into pie-shaped slices for serving. Grease the skillet well, reduce the baking temperature by 25 degrees and watch the bread closely. Because it is spread thin in the skillet versus a thick loaf pan, it will bake more quickly, usually within 15 to 20 minutes, depending on the recipe.

Everyone loves a warm cookie, gooey with melted chocolate straight from the oven, and a cast iron skillet is the perfect tool for this desired dessert. Most cookie dough recipes will fit in a 12-inch skillet. Grease the skillet well with butter and bake at 375 degrees F for about 15 to 20 minutes. Slice into wedges and serve with ice cream, or if you can’t wait, give everyone a spoon and dig in while it’s warm!

Making s’mores indoors is a popular way to enjoy this summer favorite any time of year. A cast iron skillet helps to keep your s’mores dip warm long after you pull it out of the oven. Grease the skillet lightly with butter, add chocolate chips and cover the chocolate with marshmallows. Bake at 425 degrees F until the marshmallows are browned and the chocolate begins to melt. Spread on graham crackers to serve.