9 Types of Nuts to Grow on Your Farm

If you aim to plant trees on your hobby farms, consider these various types of nuts, including almonds, pecans and pine nuts. 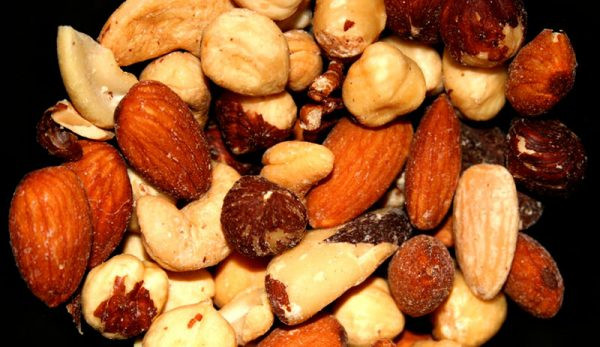 Timber trees put their energy into growing up to the canopy. Orchard trees, on the other hand, selected to be short and spreading, put their energy into the production of nuts. Here‚Äôs a sampling of nut varieties and their characteristics to help you choose the right¬Ýnut trees to grow on your farm.

The almond is related to apples, pears and peaches‚Äîthe fuzzy almond hull even looks like an unripe peach. Extremely early blooming makes almonds susceptible to killing frosts. They do best in a hot, dry climate, such as California‚Äôs Great Central Valley. Almond trees produce nuts in about five years and can reach about 25 feet tall. They must have two cultivars for cross-pollination and are pollinated by Honey bees.

Before¬Ýchestnut blight nearly wiped out the North American chestnut (C. dentata), it comprised a quarter of all trees in the Carolinian forests of North America‚Äîthrough the Appalachian Mountains and into Canada.

Today, plant scientists are attempting to bring chestnut trees back from the brink, backcrossing the North American species and blight-resistant Asian species, such as Chinese and Japanese chestnuts (C. mollissima and C. crenata, respectively)‚Äîboth of which also grow in the U.S. Depending on which of the thousands of cultivars are planted, chestnuts will grow in regions as far north as Michigan, Wisconsin and Canada and as far south as Georgia and northern Florida.
Depending on the variety, chestnuts grow 40 to 80 feet wide and high, though the size of this new variety under development isn‚Äôt yet known.

“Chestnuts are very easy to grow,‚Äù says Sandra Anagnostakis, PhD, a chestnut scientist at the Connecticut Agricultural Experiment Station “A chestnut orchard will require less investment in spraying for pests than, say, apples or peaches.‚Äù

The real limitation is soil type and adequate moisture.

“They can be grown in places with acid soil, [but] in places, such as California, where the soil is neutral, only a few cultivars will do well,‚Äù she says. “If you‚Äôre foolish enough to buy a seedling tree, you‚Äôll wait for 10 years for them to start flowering and fruiting. If you buy grafted trees, they‚Äôll start fruiting the second year,‚Äù says Anagnostakis. “Since they‚Äôre all self-sterile, you have to plant two different cultivars‚Äîboth of which will produce pollen for cross-pollination. You‚Äôll also have two different kinds of nuts and maybe two different harvest times.‚Äù

Bill Reid, PhD, nut tree crops specialist at Kansas State University, sees two disadvantages to chestnuts, which he laughingly calls “the potato of the nut world.‚Äù One is the unpleasant scent of chestnut flowers and the other is disposing of the prickly burr or husk. The chestnuts fall when the husks mature and split naturally, still on the trees. The empty husks will fall to the ground later. The shells or skins of the nuts can be peeled off with a knife or even bitten through with your teeth, if you‚Äôre eating them raw.

Edible chestnuts are not related to horse chestnuts.

The hazelnut, or filbert, performs best in moderate climates, but hazels need 800 to 1,200 chill hours to flower and break dormancy. Too far south, they may flower too early or out of sequence with pollination. Although hazels bear both male and female flowers, they are not self-pollinating and need at least two different cultivars because some cultivars won‚Äôt pollinate each other. Growers should plant four to six different cultivars to get consistent crops.

In America, eastern filbert blight fungus has limited commercial hazelnut orchards to Oregon‚Äôs Willamette Valley, but the development of blight-resistant and cold-hardy hybrids may enable the hazelnut to become a sustainable crop for much of the United States and southern Canada. The plant can be a 3-foot shrub or a 30-foot tree, depending on rootstock and pruning. Grafted or layered hazels will start producing within two to three years and can stay productive for 60 years.

Disease-resistant and cold-hardy hazelnuts have the potential to become a valuable part of the sustainable-agriculture movement, according to Tom Molnar, PhD, hazelnut expert at Rutgers University.

“We‚Äôre right on the edge,‚Äù he says. The trees are very low input, “something that you could take care of on weekends.‚Äù

Hazelnuts require only a few (if any) sprays for bud mites or blights, compared to grapes, peaches or apples, and need much less pruning. Most hazels grow naturally as large multistemmed shrubs. Even with a bush, you‚Äôll still be able to harvest a crop, says Molnar. But if suckers around the base are pruned two or three times per year to leave a single tree trunk, all the energy goes into the mature wood, which equals more flowering and sooner bearing. Single-trunked trees are also easier to maintain for weed control, mowing the orchard and harvesting.

Hazelnuts are drought-tolerant and will grow where other crops won‚Äôt, such as on slopes and in marginal soils.

Molnar admits that planting more than 1 acre or so may not be a wise investment, as yield consistency is one of the things being tested in Rutgers University trials.

“But there‚Äôs a lot of potential,‚Äù he says. “For the hobby or backyard gardener‚Äîfor your own consumption or growing for a local farm market‚ÄîI think it‚Äôs a great plant!‚Äù

The shagbark hickory (C. ovata) and shellbark (C. laciniosa) hickory are eastern North America natives, ranging from southern Canada to northern Mexico. They are slow-growing trees that may take decades to bear nuts but can live for centuries. Grafted hickory varieties may yield more reliable but not faster nut production. Hickory trees need a very long taproot before they can begin producing nuts.

Hickories are very cold-hardy, adapt well to disturbed areas and tolerate poor soils. They produce small, sweet nuts within extremely sturdy shells. The trees grow to about 60 feet tall. You have to plant two varieties whose flowering and pollen-shedding suit each other‚Äôs pollination timing.

The macadamia, introduced to Hawaii from Australia in the late 19th century, can also grow and produce well in small regions of southwestern California and southern Florida.

The pecan is another member of the hickory family. An extremely slow-growing species, it takes years to establish the massive root system it needs before it can begin to grow wood and may take five to 10 years to bear nuts. The trees can live 130 years or more and grow 90 feet tall and 120 feet wide‚Äîreally! Pecan trees can be cultivated and grow well outside their natural range, which is from Texas through Kansas, Missouri and Illinois, but need a lot of summer day- and night-time heat. They are self-pollinating, though nuts from cross-pollinated trees may be of higher quality.

For Reid, “Pecans are king!‚Äù Husk removal and disposal are not a problem with pecans, which he believes are unmatched in taste.

For farms on the northern edge of the pecan zone in Oklahoma, Missouri, Kansas and Illinois, he recommends Kanza, a cultivar that he helped release in the mid-1980s. It‚Äôs scab-resistant, ripens early in a large area of the country, and produces an excellent medium-sized nut that fills the kernel no matter what the rainfall pattern.

“Once they get up to size, you don‚Äôt do annual pruning,‚Äù he says. Maintenance pruning is to “keep them from hitting you in the head when you‚Äôre mowing underneath.‚Äù

“Planting a pecan tree is an act of faith,‚Äù he says. Even with grafted trees, pecans are among the slowest crops to establish. Until they grow a massive root system, the top of the tree won‚Äôt grow, Reid explains: “It‚Äôs only by about year 13 that you‚Äôll get ‚ÄòOh my goodness! I‚Äôll have to start doing something with all these nuts!‚Äô

“I‚Äôm shaking trees for nut production that are nearly 4 feet in diameter,‚Äù he says. As trees get larger, they sometimes have to be thinned to give the remaining trees room to grow; “If they shade each other, nut production moves to the very top of the tree.‚Äù The trees must be fertilized annually and sprayed for insects and for disease, if they‚Äôre susceptible.

Unlike walnuts and hickories, the husks, or shucks, split and dry on their own once the first freeze hits them. “Commercially, we let them dry on the trees,‚Äù says Reid. “Once we put the shaker on the tree, the nuts just come out‚Äîthat‚Äôs the beauty of pecans!‚Äù

The hican is a naturally occurring hickory-pecan hybrid that tastes like a combination of the two and has a more-easily cracked shell than hickories. Hican trees can grow to 60 feet and may take six to 10 years to produce a crop.

Evergreen pi√±ons or pinions, native to western states, produce kernels in their pinecones. Depending on the species and growing conditions, pine nut trees may be large or small, fast- or slow-growing, heat-tolerant or cold-hardy, and produce only a few or up to 200 kernels per cone.

The slow-growing pistachio thrives in regions with short, cold winters followed by hot, dry summers. Drought-tolerant, the tree grows well in arid sandy-soiled regions of the American Southwest with plenty of sun, where there are no frosts to kill its spring blooms.

Walnuts include the eastern North America native black walnut (J. nigra), the butternut (J. cinerea), the heartnut (J. sieboldiana), and what is regionally referred to as the Persian, English or Carpathian walnut (J. regia). Walnuts do well with full sun and deep, well-drained loamy soil and require 400 to 1,500 hours of cold weather, depending on the cultivar. They must be cross-pollinated. They can take three to five years to produce a crop and can live for centuries. The trees grow 50 to 100 feet tall and wide, depending on the variety. Because walnut trees‚Äô roots excrete a substance that inhibits the growth of many other plants, keep them well away from vegetable and flower gardens. Unlike other nut trees, walnuts should be pruned in the fall. At harvest, wear gloves‚Äîthe husks are tenacious and leave indelible stains.

The newer walnut-blight-resistant cultivars produce nuts that are five times bigger than the native North American variety. According to Anagnostakis, “You can usually put about 30 trees on an acre, and at about 100 pounds per tree, that‚Äôs a lot!‚Äù

Barb Feldman has written and illustrated children‚Äôs books, and her stories, essays and articles appear in magazines, newspapers and online. She believes lightly toasted, skinned hazelnuts are nature‚Äôs perfect food.